Stan Lee has died. The legendary comic book artist passed away at the Cedars Sinai Medical Center on Monday morning, according to TMZ. He was 95. He had been suffering from a bout of pneumonia and vision issues.

Lee is survived by his daughter Joan Celia Lee, or J.C., who was with him at the time of his death and broke the news to TMZ. J.C., 68, has been involved with her father’s business affairs over the past few decades, and has also dealt with accusations of elder abuse.

Read on to learn more about J.C. Lee here.

1. She Was Inspired By Her Father At an Early Age & Continued to Work Alongside Him

J.C. was born in New York City in April 1950. She had a younger sister named Joan Lee, who was born in 1953, but she died only three days after her delivery. J.C. grew up in awe of her father’s work with comic books, and later told Earn That Necklace that she was inspired by his creativity and his work ethic. “I mean, my father’s really a showman. He studied acting,” she revealed. “He needed to support a family, and he always was with the written word: he can recite anything by Shakespeare, by Rudyard Kipling, I mean, he’s really a man of the word. He’s a good man. He’s a hard, hard worker.”

J.C. learned how to do comic book layouts at paste-ups at a young age, and continued to work close with her father and Marvel Studios into adulthood. When asked which parent she took after more, Stan Lee told the Daily Beast that she inherited his mind for business. “Maybe a little more after me, because she’s more interested in the way things work in business,” he said. “But she’s incredibly like her mother.”

When Joan Lee died in 2017, J.C. was left to handle most of her father’s finances. “For years, J.C. and Joan were very protective of Stan’s finances,” said Kirk Schenck, J.C.’s attorney. “He was the creative type who preferred to delegate the management of the family’s money. Since her mother’s death, J.C. has had to operate alone to combat multiple men who descended on Stan in an effort to attach themselves to Stan and his various businesses and to manage his affairs.”

2. She Has Acted In Several Hollywood Films & TV Shows

The Ambulance (1990): TrailerCult film fans should need no introduction to the genius of Larry Cohen. A master of imbuing even the most absurd scenarios with subversive subtexts and sneaky satire, Cohen's films inhabit that grey matter zone in between the mainstream and the leftfield. His conspiracy thriller The Ambulance arrived in 1990, five years after his last…2011-10-03T19:29:00.000Z

In addition to working as an artist, J.C. has spent time as a model and an actress. She made her screen debut in the 1963 film The Cool World, where she’s was created as “1st Coolie.” Her other film credits include a robot voice in the 1994 animated series Iron Man, and an inquisitive neighbor in the 1990 thriller The Ambulance alongside James Earl Jones and Eric Roberts. Her most recent part was in the 2017 TV series No Actor Parking.

While J.C. has pursued several different career paths, there have been accusations leveled against her that she has spent copious amounts of her father’s money. She denied these allegations outright and was supported by Lee himself. “I decided my daughter is no longer a teenager,” he told the Daily Beast. “This money will be left to her, and instead of waiting until I die, I will give her as much as I can for her to enjoy now. And that’s what I’m trying to do.”

“Sometimes we have a few discussions, ‘Dad, can I ever have another few bucks?’ And I say, ‘Are you sure you’ll be left with enough?’ But there’s no problem,” J.C. added. “There’s no problem at all.”

3. She Developed a Learning App to Help Fund Children’s Charities

In 2017, J.C. partnered up with Becky Wanta and Alain Nguyen of Social Media Applications to create the SuperKids app. The app is meant to help children develop their literacy skills, and the proceeds from the app will go towards various charities and support groups.

“They figure, well, if the super-king of comics’ greatest creation is me, I gotta be a Super Kid,” she told the Huffington Post. “So they approached me just thinking: ‘Stan Lee’s Greatest Creation / Super Kid.’ And also I’m someone who cares about people, and this is a positive, encouraging kind of app, with which people can feel good about themselves, and work on what they want to work on – making them a stronger, better individual, through something that’s colorful and fun.”

J.C. also spoke on the influence that her father’s comic books had on the app. “I never thought I was sort of ‘born’ – I thought I fell out of one of the ink bottles of the Marvel – which was then Timely (Comics) – office,” she joked. “And I’ve never veered. It runs through my blood, and what they’re presenting with the Super Kids, I think other people can feel it, and it can be very exciting for them. And it can put them in this new venue of creativity and color, and excitement, and nothing that’s negative or evil or nasty.”

4. She  Was Accused of Elder Abuse Towards Her Parents In 2017

In April 2017, Stan Lee’s former business manager Bradley J. Herman accused J.C. of not only being verbally abusive towards her parents, but on at least one occasion, physically abusive as well. Herman told the Hollywood Reporter that he witnessed J.C. shove her mother Joanie before grabbing her father by the neck and slamming his head against the back of his wheelchair.

When asked about the allegations, J.C. told the Daily Beast that they were false. “As long as I’ve lived, I have never touched my mother, my father, or a dog. Never,” she said. “How that ever happened… between us, my mother was very ill. She was on major drugs and drink for the pain. And she didn’t make it really easy. And people said things. Nothing was touched. And she was a little off, to say the least. And these people from this cult or whatever, were trying to get everything. Ask me how much they did get.”

Stan Lee also denied these accusations. “I would think there are no two people besides Joanie and me,” he said. “I mean, she’s my daughter. I’m her father. Sometimes we may disagree about something, but we disagree on things like I did with my wife… I wish that everyone would be as abusive to me as J.C.”

5. She Published a Book Dedicated to Her Father Titled ‘It’s All Love’

In 2015, J.C. published a photo book titled It’s All Love: The Stan Lee Family. The book was released as a tribute to her father and mother, Joan Lee, who died last year. “I love books… I must have been on this book for three years now,” she told Naluda Magazine. “I just had all these pictures of my parents, and frankly I’m ready to start the second book. And take it up a notch.”

“I have two incredibly talented parents, and part of my joy has been watching them,” she added. “And just being this, you know, it’s like watching a love story. It’s been such a joy. And I’ve gone into the world, and I’ve traveled, and I’ve done my art, but I’ll tell you: I’ve never found anything better than my parents – and their talent and genius, and their love story. And their attitude: who they are, and how they think.”

J.C. also stated that the book was a “labor of love” for the entire family. “It’s really done with just love, and it’s really like just sharing something private,” she explained. “My mother said it had passion, and certainly filled with LOVE. It’s nice to see something a little organic, that’s done with love and all that good stuff we artists like.” 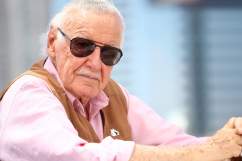 WATCH: Every Stan Lee Cameo In a Marvel Film