Robin Bush was George and Barbara Bush’s oldest daughter. George H.W. Bush’s obituary reads that one of his children, Robin, passed away before both he and Barbara Bush died. Robin was the light of the Bush couple’s lives, and her death was a tragic and heartbreaking story. She died of leukemia when she was almost four years old. Her loss left a gaping hole in the couple’s lives — a burden that no parent should ever have to bear. Here’s everything you need to know about Robin Bush and how she died.

George and Barbara with their children George and Robin in 1950. (George Bush Presidential Library and Museum Audiovisual Archive)

Born Pauline Robinson “Robin” Bush, Robin was born in 1949, the second child of George H.W. and Barbara Bush. Their first son, George Walker, was born in 1946. After Robin passed away, they didn’t have another daughter until Dorothy was born in 1959, their youngest child.

Barbara had expressed concern that she hadn’t dealt well with her son George’s connection with Robin and helping him deal with her death. She said she had kept him away from the hospital and delivered the news abruptly about her death, because she was dealing with so much of her own grief.

2. Robin Was Diagnosed With Leukemia When She Was Three

George and Barbara suffered intense loss in their life, dealing with a tragedy that no parent ever wants to endure. When their daughter Robin was only three, in 1953, she was diagnosed with leukemia. They first realized something was wrong when Robin became fatigued, listless, and didn’t want to play anymore. Their three-year-old had said one day, “I’m either going to lie on the bed and look at books or rest outside and watch cars go by.” They knew a child her age shouldn’t be feeling so exhausted all the time, and that was their first clue that something was wrong.

3. George and Barbara Refused to Accept That There Was No Hope

Marvin, Jeb, Neil, and Doro in 1960. There was a hole left in their family after Robin died in 1953. (George Bush Presidential Library and Museum)

The doctors told them that there was no hope for a cure. They said she would be gone in two to three weeks, and they should just take her home and love her in the time they had left. But George and Barbara didn’t accept the diagnosis, and took her for blood transfusions and bone marrow tests. At the time, it was difficult to find a hospital that treated children for cancer, they said.

For seven months, they fought for Robin’s life. Friends in Midland gave blood in her honor. George began going to church every morning on his way to work.

During her treatment, they tried to keep things as normal as possible for her, except for a few things. They wouldn’t let George Jr. play with her, Barbara said, because she bruised so easily. And they tried to not let Robin know that she was so sick. Barbara wouldn’t let anyone cry in her hospital room. Barbara told Texas Monthly:

Of course, she knew that she was sick. I read to her all day long, tickled her, and loved her. She was getting all the attention in the world, and she was young enough that she didn’t really think ahead.”

But despite their best efforts, Robin still died, just before she turned four.

4. Barbara Said She Could See Her Daughter’s Spirit Leave 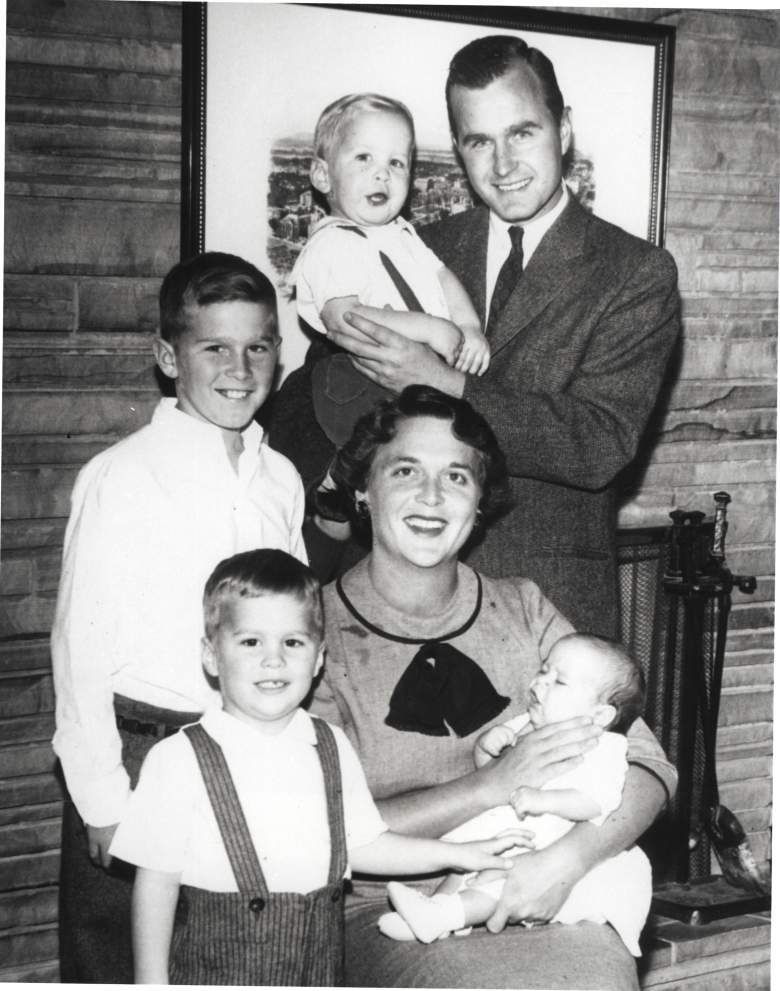 Barbara Bush told the Today Show about the moment that Robin died:

I was combing her hair and holding her hand. I saw that little body, I saw her spirit go.”

At the time, there was so much fear about leukemia that neighbors wouldn’t even let their children around Robin, for fear they could catch the disease. The Bushes donated Robin’s body to cancer research after her death, Today reported, and they found comfort in knowing that she may have helped other children live.

Barbara said that she and George felt an enormous pain after Robin’s death. She told Texas Monthly:

“It felt like our hearts were breaking. … I hadn’t cried at all when Robin was alive, but after she died, I felt I could cry forever. George had a much harder time when she was sick. He was just killing himself, while I was very strong. That’s the way a good marriage works. Had I cried a lot, he wouldn’t have. But then things reversed after she died. George seemed to accept it better.

Barbara Bush had said that her hair turned prematurely white during the months that her daughter was treated for leukemia.

Many years ago, while writing a story about George W. Bush, I read Barbara Bush’s memoir. The detail that stays with me to this day: Her hair turned prematurely white during the months that her 3-year-old daughter Robin was treated for leukemia. She was 28 when Robin died.

5. George H.W. Bush Said He Expected Robin To Be the First Person He Saw When He Passed Away

Dora Bush with George H. W. and Dorothy Walker Bush in 1962. In many ways, Doro looked a lot like her sister as a child. (George Bush Presidential Library and Museum)

In what is now a bittersweet quote after George H.W. Bush’s death, George Bush once said that he expected his daughter Robin would be the first person he saw after he passed away, Today reported.

Jenna Bush Hager, George Bush’s granddaughter, wrote on Instagram about how she had a chance to talk to her grandfather about the afterlife before he died. “He said… Yes, I think about it. I used to be afraid. I used to be scared of dying. I used to worry about death. But now in some ways I look forward to it… Well, when I die, I’m going to be reunited with these people that I’ve lost… I hope I see Robin, and I hope I see my mom. I haven’t yet figured out if it will be Robin as the three year old that she was, this kind of chubby, vivacious child or if she’ll come as a middle-aged woman, an older woman… I hope she’s the three-year-old.

This brought me such comfort this morning. I had the opportunity to talk with my grandpa about the afterlife. This is what he said: ​He answered without any hesitation. “Yes, I think about it. I used to be afraid. I used to be scared of dying. I used to worry about death. But now in some ways I look forward to it.” And I started crying. I managed to choke out, “Well, why? What do you look forward to?” And he said, “Well, when I die, I’m going to be reunited with these people that I’ve lost.” And I asked who he hoped to see. He replied, I hope I see Robin, and I hope I see my mom. I haven’t yet figured it out if it will be Robin as the three year old that she was, this kind of chubby, vivacious child or if she’ll come as a middle-aged woman, an older woman. And then he said, “I hope she’s the three-year-old.” Robin was the daughter this giant of a man lost years before to leukemia. The little girl he held tightly: who spoke the phrase I have heard Gampy repeat for my entire life, forever knitting Robin’s voice into the tightly woven fabric of our family: “I love you more than tongue can tell.”

In a Today show interview, Barbara said that Robin’s memory is a joy to her:

Robin to me is a joy. She’s like an angel to me, and she’s not a sadness or a sorrow, those little fat arms around my neck.”

But at the time, she credited George Jr. with “saving her life” after Robin died, she told Texas Monthly. Her young son would tell friends that he couldn’t play with them because he needed to be home to play with his mom, since she was so lonely. She also said that Robin’s death strengthened their faith.