Reagan Trussell is the girlfriend of PGA Tour golfer Aaron Wise, who is climbing up the ranks in the golf world during his second season as a PGA professional and is in contention at the 2019 U.S. Open at Pebble Beach. Trussell and Wise met at the University of Oregon, where he was a member of the golf team and she was a gymnast.

She has been by Wise’s side throughout his professional golf journey, starting with his time on the Web.com and PGA Canada tours. Last season, the 22-year-old Trussell and Wise, also 22, celebrated together as he won his first PGA Tour tournament, the AT&T Byron Nelson in May 2018, and was named the PGA Tour Rookie of the Year. At the 2019 U.S. Open, which is being played in California, where both Trussell and Wise grew up, Wise sits in a tie for second place after the first round. He shot a 5-under 66, putting him behind only Justin Rose.

Here’s what you need to know about Reagan Trussell, Aaron Wise’s girlfriend:

1. Aaron Wise & Reagan Trussell Went Viral After His First PGA Tour Win, When She Appeared to Reject His Kiss During Their Celebration

Aaron Wise goes in for the kiss aaaannnddd DENIED! pic.twitter.com/Z7zgJXBjAW

Reagan Trussell first became known to golf fans in an awkward way. After Aaron Wise won his first tournament, the AT&T Byron Nelson in May 2018, he was surprised to see his girlfriend there to celebrate at the 18th green along with his family. But in the celebratory moment, the cameras caught what appeared to be Trussell rejecting Wise’s attempt at a kiss. Social media lit up, with some saying he’d been “put in the friend zone,” or that he had taken a shot and failed.

But Wise later revealed the real story of what happened during a moment neither he nor Trussell will likely forget.

“So my girlfriend actually flew in Sunday morning and it was a total surprise she was coming,” Wise told GolfDigest.com. “She waited, she kinda hid around the golf course so I wouldn’t see her and she just wanted to surprise me on the 18th green. We were just all so shocked, she was excited, I was excited, and in the moment she was kind of telling me what she had to do so I couldn’t see it and for the moment to be the way she wanted, and I kinda went in for a little kiss there and she didn’t even recognize it because she was too excited in the moment. It’s definitely been made a lot of. It’s funny, we’re rolling with it.”

Wise added, “It’s definitely kind of weird to see myself in the tabloids like that, but it’s all in good fun. And you know, a first win is not supposed to go perfectly, so if that’s the only thing I messed up, I’ll take it.”

He told Golf.com, “Yeah, I been giving her some sh*t about that. A lot has been made about that. It’s really nothing. Like I was saying, she was just so excited to surprise me. I was kind of ruining the surprise a little bit that she was shocked, and she didn’t even see me go in for the kiss. No hard feelings at all. We love each other a ton and we’re great. It was a funny moment that I think we’ll always be able to look back at, but that’s all it really was.” 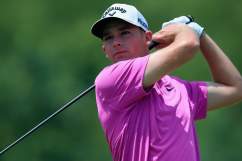 2. She Is Originally From Irvine, California, & Was a Star Club Gymnast

Reagan Trussell is originally from Irvine, California. She is the daughter of Kevin Trussell and Judy Trussell, according to the University of Oregon website, and she has an older sister, Jennifer Trussell.

Trussell attended Woodbridge High School and was a star gymnast at South Coast Gymnastics. She also spent time working at the club.

3. Trussell Was a Top/Tumbler for the Oregon Ducks Acrobatics & Tumbling Team for 4 Years

Trussell spent four years as a member of the acrobatics and tumbling team at the University of Oregon, according to the Ducks website. She helped lead the team to four NCATA tournaments. They were runners-up three times.

Trussell was a top and tumbler, according to the Ducks website.

She won her first career individual title in 2018 during her senior season, on the final night of the NCATA Championship, according to the Ducks website.

4. She Lives With Wise in Las Vegas

Trussell and Wise have lived together in Las Vegas, Nevada, since 2018. Wise moved to the city in 2016 to be closer to his coach after turning pro. His coach is TPC Summerlin swing coach Jeff Smith,

“It was a pretty simple decision to move here. To be able to work with him, get better at golf and the weather is pretty good year so I can play year-round. I feel like a lot of the Oregon guys who know me and work with Jeff have seen the same thing; that it really is a great place to live and to develop your game. There’s a bunch of really good young golfers out here now and we can all go out and compete and have some fun when we are home,” Wise told the Las Vegas Review-Journal.

On Instagram in 2017, Wise wrote in the caption of a photo with Trussell, “Can’t believe i get to call this girl mine ?.”

Trussell graduated from the University of Oregon in 2018.

Since moving to Las Vegas, Trussell has worked in real estate and is a realtor with a local company, according to her Instagram profile. She wrote on Linkedin, “I graduated with an Economics major and Business minor at the University of Oregon while also being a dedicated member of the Acrobatics and Tumbling team. I am working at Windermere Excellence as a Realtor.”

Loading more stories
wpDiscuz
0
0
Would love your thoughts, please comment.x
()
x
| Reply
Reagan Trussell is a former acrobatics athlete at the University of Oregon who is the girlfriend of golfer Aaron Wise, a rising star on the PGA Tour and fellow Duck.