The fashion designer and socialite Gloria Vanderbilt has died at the age of 95. Her son, Anderson Cooper, announced her passing on the morning of Monday June 17.

“Gloria Vanderbilt was an extraordinary woman, who loved life, and lived it on her own terms,” Cooper said in a statement. “She was a painter, a writer and designer but also a remarkable mother, wife, and friend. She was 95 years old, but ask anyone close to her, and they’d tell you: She was the youngest person they knew — the coolest and most modern.”

Here’s what you need to know about Gloria Vanderbilt’s family:

1. Her Father Died When She Was a Baby, Leading to a Fierce Custody Battle Between Her Mother & Her Aunt

Gloria Vanderbilt was born into one of the most famous families in America. When she was just one year old her father, Reginald Vanderbilt, passed away, leaving Gloria a multi-million dollar inheritance in trust. Reginald was notorious for being a hard drinker and a gambler. Doctors begged him to give up drinking, but he refused. He died of cirrhosis of the liver in 1925. He had blown through his enormous inheritance and left behind nothing for his young wife. But Gloria was set to inherit five million dollars in a trust fund.

Gloria spent the early years of her life with her mother, who was also named Gloria. Gloria and her mother traveled throughout Europe, hobnobbing with members of high society. The young Gloria was mainly taken care of by her nurse, who apparently was angry at how little time the child’s mother spent with her. They returned to the US when the young Gloria needed an operation for tonsilitis. That’s when she was left in the care of her maternal aunt, Gertrude Vanderbilt Whitney. Gertrude looked after the child and enrolled her in school. When young Gloria’s mother returned, Gertrude was not willing to give her up.

A fierce custody battle ensued, with Gertrude charging that Gloria was an unfit mother who drank, looked at pornography, and lounged around in silk pajamas while neglecting her child. The case was called the “trial of the century” at the time. It ended when Gertrude was awarded custody of Gloria, who was one year old at the time.

2. She Was Married 4 Times & Called Wyatt Cooper, Her Fourth Husband, the Love of Her Life

Gloria Vanderbilt married her first husband, a Hollywood agent named Pat DiCicco, when she was 17 years old. DiCicco was an abusive husband, she later said, and the marriage did not last. ‘He would take my head and bang it against the wall,’ she told The Telegraph. ‘I had black eyes.’

While still married to DiCicco, she met her second husband, Leopold Stokowski. He was 62 years old; she was 20. Stokowski was a world-famous conductor; he encouraged her interest in the arts. They married after her divorce from DiCicco and had two children together, Stan, born in 1950, and Christopher, born in 1955. They divorced after 10 years of marriage.

Vanderbilt’s third husband was the film director Sidney Lumet. They were married for seven years before finally divorcing in 1963. Then in 1964, she met a writer and editor named Wyatt Cooper, the man she later described as the love of her life. The couple remained married until Cooper died of a heart attack at the age of 50. They had two sons, Anderson and Carter.

“We had the family life that I’d always wanted,’ Vanderbilt said. ‘He made me understand what it would have been like to have had a father – he was a most amazing father. I’d never experienced anything like it.” 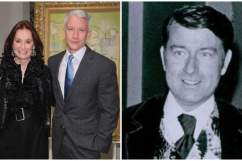 3. Her Son Anderson Called Her an ‘Extraordinary Mom’ & Co-Wrote a Memoir With Her

Anderson Cooper, the CNN anchor and journalist, gave an on-air eulogy for his mother. Cooper described her as an “extraordinary mom” and reminisced about her zest for life.

“Gloria Vanderbilt was an extraordinary woman who loved life and lived it on her own terms,” Cooper said. “She was a painter, a writer and designer but also a remarkable mother, wife and friend.”

4. Her Son Carter Committed Suicide When He Was 21

Anderson Cooper, the journalist and CNN anchor, says he is still haunted by the death of his older brother Carter. When Carter was 23 years old, he committed suicide by jumping from the terrace of his mother’s 14th-floor Manhattan penthouse. Anderson Cooper has said that he thinks about his talented older brother every day; he says nobody in the family ever really understood what drove Carter to take his own life.

“He was so much smarter than me, he had gone to Princeton, he was working at American Heritage as a book editor, and it was so inconceivable to me,” Cooper said.

5. Her Half Sister, Cathleen Vanderbilt, Also Inherited a Fortune from Their Father

Gloria Vanderbilt had a half-sister, Cathleen Vanderbilt, who was the daughter of Reginald Vanderbilt and Cathleen Gebhard Neilson. Like Gloria, Cathleen inherited a five million dollar trust when Reginald died in 1925.

Cathleen was married three times. She married Harry Cooke Cushing III in 1923 and they had one son, named Harry. After the marriage ended in divorce, Cathleen married a television executive named Lawrence Lowman. This marriage also ended in divorce. Cathleen then married a Havana publisher named Antonio Martin Arostegui in 1940. They remained married until her death.

Cathleen died in Havana, Cuba, in the Anglo-American Hospital. She was 40 years old.

Loading more stories
wpDiscuz
0
0
Would love your thoughts, please comment.x
()
x
| Reply
The fashion designer and socialite Gloria Vanderbilt has died at the age of 95. Here's what you need to know about her family and kids.