Wyatt Emory Cooper was the fourth husband of heiress and fashion designer Gloria Vanderbilt, who passed away on June 17, 2019, at the age of 95. The couple was married for 15 years before Cooper’s death in 1978. Vanderbilt never married again.

Cooper and Vanderbilt had two sons together: Anderson and Carter. Anderson Cooper delivered a eulogy to his mother on CNN, in which he shared details about her family background, her marriages, her determination to achieve her own success in life, and that “love is what she believed in more than anything.” You can watch the eulogy here.

Here’s what you need to know about Wyatt Emory Cooper.

Wyatt Emory Cooper spent his professional career in the creative sector. According to his profile on IMDB, Cooper began acting in the early 1950s. His first on-screen credit was listed in 1952 for the “CBS Television Workshop.” He later made appearances in television series including “Studio One in Hollywood,” “Robert Montgomery Presents,” and “The Rebel.”

Cooper had more success as a writer. He was listed as the author of a screenplay called “The Chapman Report.” The screenplay was based on a novel by Irving Wallace and focused on the sexual experiences of four women. Jane Fonda was one of the stars.

Cooper teamed up with Truman Capote on a script called the “Glass House.” The film, starring Alan Alda, aired on CBS in 1972. The TV movie won the Golden Shell prize at the San Sebastián Film Festival.

2. Wyatt Cooper Grew Up in Mississippi & Wrote a Book About His Family History

Wyatt Emory Cooper was born on September 3, 1927. He grew up on a farm near Quitman, Mississippi.

Cooper documented his family’s experiences in a book titled “Families: A Memoir and a Celebration” which was first published in 1975.

In the book, Cooper recounted situations with his extended family and compared his experiences with how family dynamics appeared to be changing at the time. A review of the book from Kirkus Review states, “Married to artist Gloria Vanderbilt and the very caring and conscientious father of two young sons, Cooper rues ‘today’s claustrophobic units of two, three, or four persons who seem to have no outside kin and no antecedents,’ recalling how even the drunken uncles, bullying cousins and not-quite-right-in-the-head aunts among his relatives instilled in him a feeling for community, a sure knowledge that ‘roots are a precious thing.'”

Cooper left his hometown to study theater arts at the University of California in Los Angeles. He later settled in New York but according to his obituary, “maintained close links with the South.”

Wyatt Cooper and Gloria Vanderbilt tied the knot in 1963. It was his first marriage but the fourth for Vanderbilt. Cooper became a stepfather to Vanderbilt’s two older sons from her former marriage to Leopold Stokowski. The boys were 11 and 13 at the time. You can read more about Vanderbilt’sfirst three husbands here and more about her childhood here.

The marriage announcement in the New York Times described the wedding as a “quiet civil ceremony.” They were married by court lawyer L.A. Verzi in his office. The article adds that Vanderbilt’s cousin was in attendance.

4. Cooper Died in 1978 After Suffering From Heart Issues

Wyatt Emory Cooper was married to Gloria Vanderbilt for 15 years before his death. His IMDB profile states that Cooper suffered from a series of heart attacks.

The obituary included that prior to his death, Cooper and Vanderbilt were living at United Nations Plaza on the east side of Manhattan. They used to take their sons to a second home in Southampton, Long Island, during the summers.

5. Anderson Cooper Wrote a Tribute to His Late Father in 2016

Anderson Cooper wrote about his late father in a New York Times tribute in 2016. Anderson was 10 when his father passed away in 1978. He wrote that he wished he could ask Wyatt Cooper for advice. “I’d ask him what he thinks of me? Is he proud of me? Does he approve of the man that I’ve become? I’d tell him about the choices I’ve had to make, the fears and difficulties I’ve struggled to overcome. What would he have done if he were me?”

Anderson added that since his father had died at age 50, he sometimes wondered if he would also die at that age. (He said doctors assured him of his own good health).

Wyatt Cooper’s older son, Carter, took his own life in 1988 at age 23. Police said he jumped from the terrace of his mother’s 14th-story apartment. She was with him at the time. 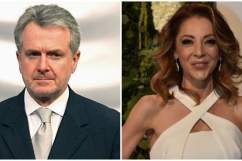