Mikki Willis is a former model and actor and the filmmaker behind the controversial film Plandemic.

Willis, a married father of two, has been a filmmaker for two decades and started his own production company in 2001. He has also been a parent-advocate and supporter of many charitable causes.

On April 26, he wrote in a Facebook post that he was working on a film that would “blast the light of truth into the darkest corners of our corrupt healthcare system.”

Heavy has conducted an extensive fact-checking of various claims made in the Plandemic video. You can read it here. The video can be found here.

Here’s what you need to know about the filmmaker of Plandemic:

1. He Created the Controversial Film Plandemic

Plandemic is a film about the current coronavirus crisis that examines the government’s approach to the COVID-19 pandemic and implies that vaccination producers have the most to gain from the outbreak. A vignette released to promote the film features Dr. Judy Mikovits, a former chronic fatigue researcher and critic of Dr. Anthony Fauci and mass vaccinations.

In the vignette, Mikovits — who has been credited with helping develop medical breakthroughs around HIV/AIDS and has also been fired, engaged in lawsuits and arrested throughout her career — accuses Fauci of delaying the release of her research paper, which resulted in people dying from AIDS.

The statement has not yet been taken down. However, his film started trending with the #Plandemic hashtag on Twitter as people reacted to the film and its removal.

Some on social media have praised Willis for making the film.

There is nothing, no billionaire, no politician, no media, no level of censorship that can slow this awakening. It is here. It is happening. Who’s side are you on?https://t.co/dzSdVy0b7d vía @YouTube pic.twitter.com/6psydt1s6H

Others have said that the film promotes a baseless conspiracy theory and unfairly smears Fauci.

Use critical thinking when being fed conspiracy theory videos like #Plandemic. None of it is even remotely true and is not backed up by any evidence. https://t.co/VoJuEnCPKO

Plandemic is not Willis’ first film, and he has spent years as a filmmaker and interviewer.

He held the first-ever “Elevate Film Festival” in 2006 and went on to produce films such as Weed the People, The Shadow Effect, Be Brave and Impact.

Elevate is a production company based in Ojai, California, and produces feature films, TV specials, commercials and other videos. The company, according to its website, is meant to “share stories that deserve a voice” and “amplify the good news of the world.”

In a 2013 interview with Lilou Mace, Willis described his work with Elevate as challenging, collaborative and intended to “utilize the power of the media in a positive way”:

Sacrifice is a word I’ve been very intrigued by for a long time because there’s part of me that wants to say, ‘Oh, you don’t have to sacrifice anything.’ But the truth of the matter is, yeah, there’s a lot that’s been sacrificed. What’s been gained in its place has been so rewarding and so fulfilling that you don’t regret the sacrifices.

Willis was inspired to found the company after 9/11, when he said he was, “inside the twin towers just before they fell” and helped serve firefighters food and aid during the rescue efforts.

Willis’ time at Ground Zero was recorded by The Journal News, which wrote about how Willis was in awe of the firefighters working nonstop to rescue people. “They were driven like you wouldn’t believe by the job they had to do,” he told the Journal News. “But you saw the grief on their faces when they took the rare opportunity to take a break and get some food or something. They couldn’t even tell us what they wanted to eat.”

3. He Got His Start In Modeling And Acting 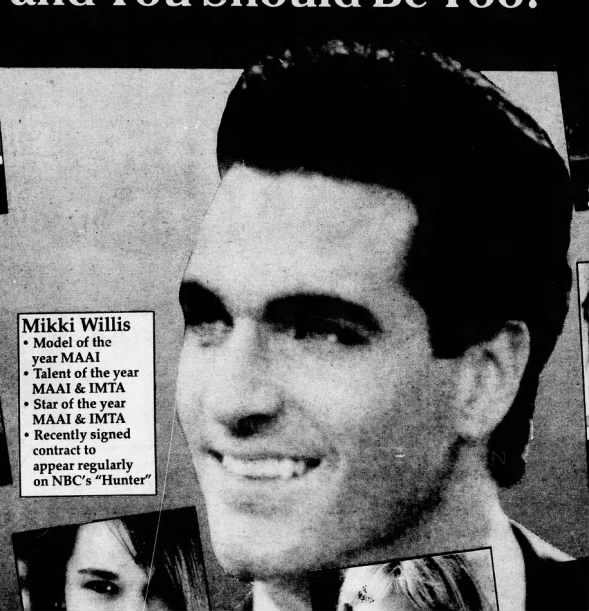 In 1990, Willis was featured in The Sacramento Bee as the winner of the Modeling Association of America International and named International Modeling Talent & Management Star of the Year.

The Placer Herald also reported that he beat out 300 models for the cover photo on the 1990 Sacramento’s Best calendar, which gave him the opportunity to work at Levi’s and model in New York.

Willis, who had been in beer and milk commercials as well as magazine and fashion shoots, left Rocklin, California, to “(pursue) a career as a model and actor.” He temporarily returned to Rocklin, however, to take a non-speaking part in the film Breaking the Rules (Sketches), which also starred Jason Bateman. In 1992, he was spotted by the Placer Herald as an extra in the soap opera Days of Our Lives.

Willis founded NYLA, The New York / Los Angeles Theater of the Arts at the age of 25, according to the Annenberg Foundation. He was a theater director at NYLA and delved into the world of writing, producing and directing before he eventually founded Elevate Films.

4. His Wife Is Also A Film Producer

Willis’ wife, Nadia Salamanca, is a former competitive gymnast and a classically trained dancer. Salamanca attended Irvine High School and went on to attend the University of Colorado Boulder to study acting and writing.

Salamanca took acting roles in Enigma and B-Girls, and she was the executive producer for Mr. President, Angel’s Nest, We Were One and Steer, according to her IMDb profile. She acted in or directed more than a dozen films.

According to her Elevate biography, Salamanca worked as a dancer and actress before she transitioned to the role of a casting agent and became a producer of short films, documentaries and music videos. Salamanca is credited as a co-founder of all the Elevate platforms.

In late 2017, the family revealed that they lost their home and possessions in the Thomas Fire that had swept through California. A GoFundMe post credits Salamanca and her friend Kurt Rutkowski for requesting the help; the family raised $22,613 of their $50,000 goal and left a thank you message announcing that they had already begun to rebuild.

Salamanca and Willis have two boys, Azai and Zuriel.

Willis and his wife have a YouTube channel called Elevate Family. The platform, which has nearly 30,000 subscribers, is meant to encourage positivity, according to its webpage.

“I see so much negativity being shared through social media that this is my way of bringing a little balance, at least to my friends,” the page reads.

Willis became well-known in the world of parenting after he posted a video supporting his son’s right to play with the “Little Mermaid” Ariel doll and encouraging other fathers to do the same in 2015. The video earned him admiration on the platform and elsewhere; he appeared on the TV show The Doctors and defended his son’s choice again on a segment about gender-appropriate toys.

He has also posted moments when he and his family are engaging in charity. For example, he and his son Azai represented the United Way on a walk to end homelessness. He made a video about the walk, which starts with his son asking two homeless people about their experiences and how he can help:

Willis has also been featured on a podcast hosted by Jeff Agostinelli, where he talked about “conscious parenting.”

Loading more stories
wpDiscuz
0
0
Would love your thoughts, please comment.x
()
x
| Reply
On Apr. 26, Mikki Willis hinted in a Facebook post that he was working on a film that would, "blast the light of truth into the darkest corners of our corrupt healthcare system." Here's what you need to know about the filmmaker of 'Plandemic.'