Brent Brown, 39, is the Utah man who is charged with six felonies related to the disappearance of Madelyn Allen, 19, a once-missing student from Snow College who was found alive in Brown’s home.

Allen vanished after being seen leaving the college in Ephraim, Utah, on December 13, 2021.

“We all hoped we would be having another press conference with this outcome,” said Snow College Police Chief Derek Walk in a December 19 news conference. “We are grateful to announce that Madelyn Allen has been found and reunited with her family.”

1. Brown Tied Allen Up When He Went to Work, an Affidavit Says

According to an affidavit obtained by the Salt Lake Tribune, Allen met Brown in an online “chat group” and “arranged to have him pick her up” on the day she went missing. KSL-TV reported that Brown told police he met Allen “on a bondage chat group.”

According to the affidavit, the relationship between Allen and Brown “became nonconsensual and violent,” the Daily Mail reported.

Brown took Allen’s phone and would only allow her to text her family once the next day before throwing away her phone, the Salt Lake Tribune reported, citing court documents. He then “tied up [Allen] while he was at work,” it says, confiscated her wallet, and threatened her family, according to the newspaper.

ABC4 reported that the text said, “I Love You!” Authorities traced her phone to Loa, Utah, 87 miles from where Allen had last been seen, the outlet reported.

The chief said that investigators “did a fair amount of door knocking” to locate Brown, in addition to using other investigative techniques. The affidavit obtained by KSL said authorities pinged her cell phone.

“As they approached the house they observed through a basement window a person with light-colored hair and a small build in the basement of the house,” the affidavit states, according to KSL. “As they knocked, this person ran out of sight.”

Brown’s parents, who own the home, allowed police to search it, and they found Allen in “what is described as a coal storage area of the residence … completely covered in coal,” according to KSL.

According to the affidavit obtained by KSL, Allen told police “Brown raped her several times daily,” and “she did not want to have sex with Brown,” but was afraid to leave because he had threatened her family. She even saw a television report on her disappearance.

ABC4 reported that an affidavit says Brown did not allow Allen to wear clothes during her time at his house. She also alleged that he choked her and carried a knife, the television station reported.

ABC4 reported that police saw Allen’s ID in Brown’s house and “a gun was located in an open suit case that contained clothes that appear to belong to her as well.” According to the television station, Brown said he and Allen met on Kik in a “slave domination fetish group.”

Brown said that he thought his interactions with Allen were all a part of their “role play,” the station reported.

2. Brown Is Accused of Multiple Felony Counts But Police Are Still Investigating His Ties to Allen

During an initial court appearance on December 22, Brown told Judge Wallace Lee that he’d “like to be home for Christmas,” but Lee ordered Brown to continue to be held without bail until his next hearing on January 10, Fox13 reported. 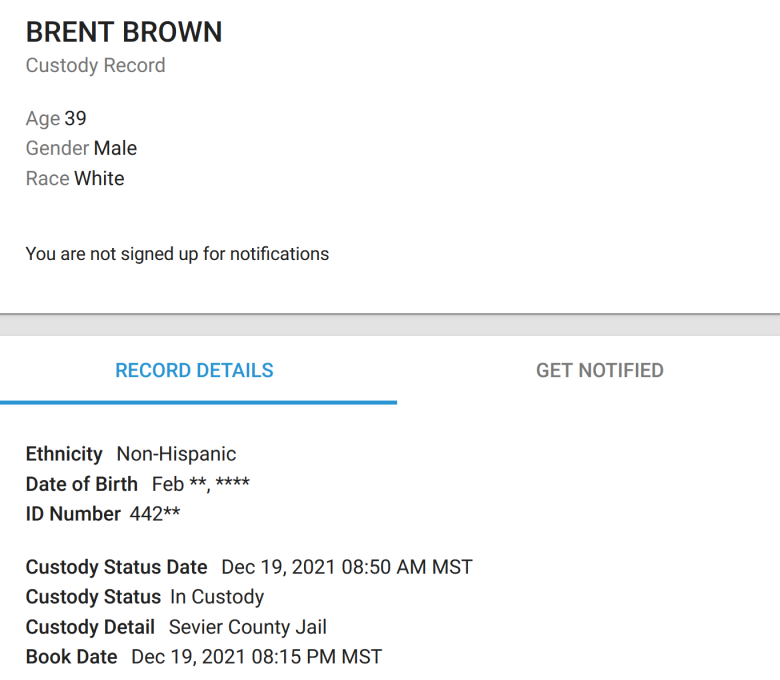 “We don’t have a lot of information about him,” Snow College Police Chief Derek Walk said in a news conference. “We met him for the first time last night. We don’t know how extensive his relationship or her knowledge of him is thus far.”

He added: “This is an ongoing investigation. There are certain aspects we are still digging into and trying to understand fully.”

3. Allen Was Last Seen Leaving Her Dormitory on December 13

Authorities released a 17-second video that shows Allen leaving her dorm, wearing a white jacket and clutching a bag. According to KUTV, that video shows her leaving the dorm at 9:22 p.m.

A post on the family’s Facebook page says, “Maddie has always been a fighter—and it’s time you got to know her story better. Here she is telling it in her own words (for a scholarship application before being accepted to Snow College). Please share this post and encourage others to share as well. ❤️”

“My parents have always called me a fighter,” Allen says in that video, in which she reveals she was just a pound and a half at birth and endured countless doctors and therapy appointments that left her developing “severe anxiety,” about many things, including school and “new places.”

She said she “found joy,” though, in things like baking, dancing, music and traveling, and she auditioned for a high school musical.

On December 14, 2021, Snow College announced that Allen was missing.

According to its website, Snow College serves nearly 6,000 students on two campuses — one in Ephraim and another in Richfield, Utah. The two-year college “has been nationally recognized for its student success rates, affordable cost-for-value, involvement opportunities, and exceptional teaching,” the site says. 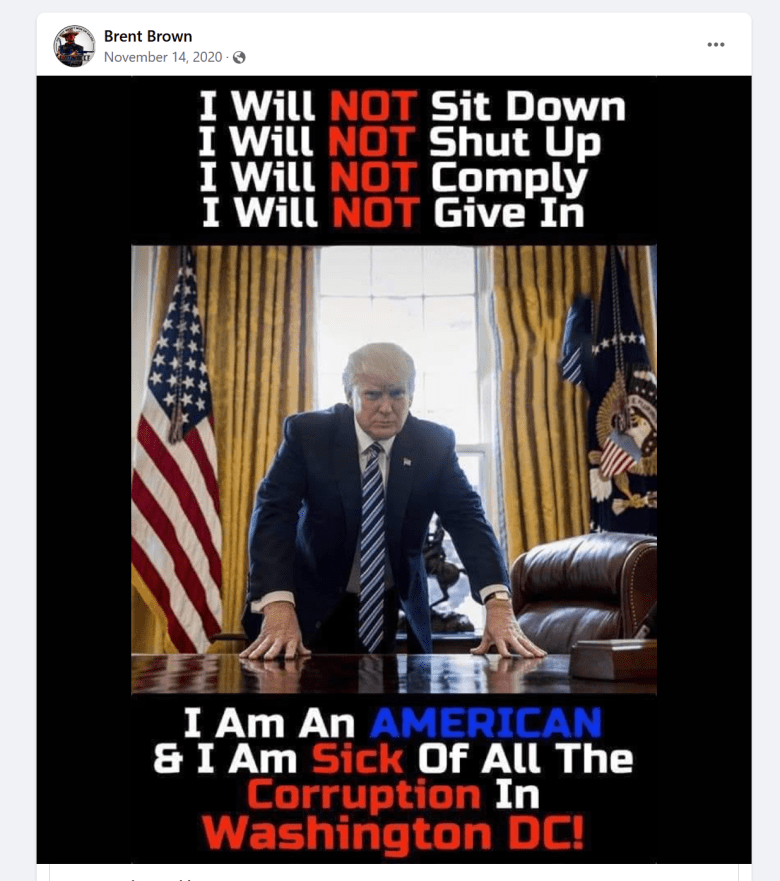 Brown’s Facebook profile picture is Clint Eastwood holding two guns with the caption, “Eat Beef. The West wasn’t won on salads.” His cover photo shows a person lassoing a steer. Another photo shows him on a horse.

In November, he shared a man’s post that read, “I’m proud to be an American. I bet no one passes this on because they are scared to be called racist.” He also shared several news stories about child rape cases in the past.

Also in November, he shared another man’s photo that read, “Human trafficking should scare you more than COVID.”

His posts railed against illegal immigration, stalled cargo ships, and the Steele dossier, and expressed support for police and gun rights.

5. Allen Was Born Premature With Many Challenges 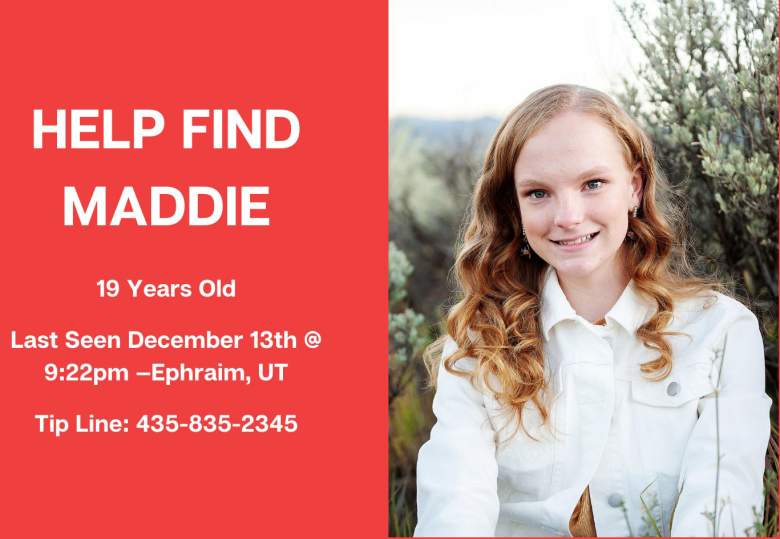 Allen was born with a brain bleed and has faced myriad challenges, her father said, while the search for his daughter was still on. He said she was born prematurely at only 26 weeks. She has had mental and emotional difficulties but has “repeatedly overcome these many obstacles,” he said, adding that she loves art and music.

Allen’s uncle, Jacob Allen, joined police in the December 19, 2021, news conference. “It is striking how different our hearts have felt. … She is a fighter. She is now a survivor,” he said.

He said the ordeal was “dangerous and traumatic.” He declared the family “overjoyed” that she is alive. They pledged to “help her heal and recover.” They called the investigation “world-class.” In the press conference, her father described how the parents were on a rollercoaster of emotions.

The family created a Facebook page and Instagram page to post updates about the search. The page has since changed its name to “Maddie Has Been Found.”

Loading more stories
wpDiscuz
0
0
Would love your thoughts, please comment.x
()
x
| Reply
Brent Brown is the Utah man who is accused in the disappearance of Madelyn Allen, 19, a missing student from Snow College.