Dianne Feinstein is the long-serving senator from California. At age 88, she is the oldest member of the U.S. Senate and a Democrat.

Her age became a talking point in April 2022. The San Francisco Chronicle reported at least four senators and three of Feinstein’s former staffers had expressed concern that “her memory is rapidly deteriorating.” Feinstein responded by stating, “there’s no question I’m still serving and delivering for the people of California, and I’ll put my record up against anyone’s.”

Feinstein is not expected to run for re-election in 2024, according to Politico.

Here’s what you need to know about the senator’s family.

1. Feinstein Was Married to Billionaire Financier Richard Blum for 40+ Years Before He Died in February 2022 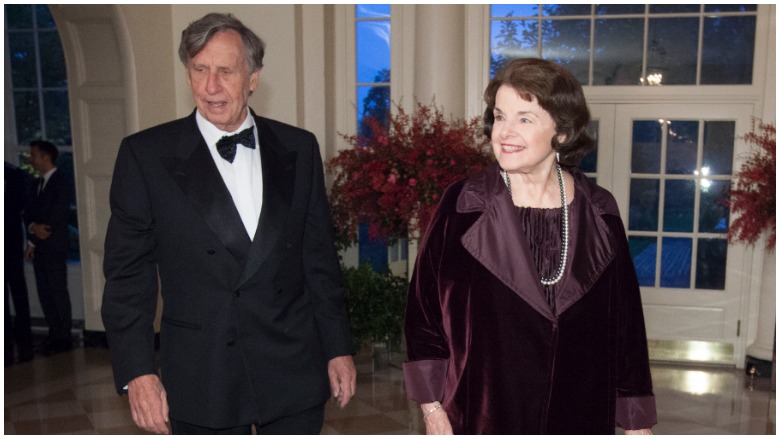 GettySenator Dianne Feinstein and Richard Blum arrive at the State Dinner for China’s President President Xi and Madame Peng Liyuan at the White House for an official State Visit September 25, 2015 in Washington, D.C.

Feinstein and Richard Blum met in the late 1970s. She was a member of the San Francisco Board of Supervisors and he was serving as an adviser to Mayor of San Francisco George Moscone, as Heavy previously reported. The couple tied the knot in a small ceremony at San Francisco City Hall in 1980.

Blum earned his fortune as an investment banker. He founded his private equity firm, Blum Capital, in 1975. According to San Jose Inside, Blum had an estimated net worth of $1 billion.

As Feinstein’s office highlighted in a statement when Blum died, he was devoted to philanthropy:

For decades, Blum focused much of his time on the people of the Himalayas, founding the American Himalayan Foundation and deeply impacting the lives of thousands of people in the region. His work focused on ending human trafficking, improving health care, providing elder and child care and promoting the region’s vibrant culture. A longtime friend of the Dalai Lama, Blum is an honorary consul of Nepal.

According to the American Himalayan Foundation, Blum was inspired to get involved in the region following a “climbing expedition to the Kangshung Face of Everest in Tibet” in 1981. As Heavy previously reported, the organization operates schools, orphanages, medical clinics and refugee camps in Nepal and Tibet.

Blum battled cancer at the end of his life. He died on February 27, 2022, at his home. Feinstein wrote in a statement that her family had “a hole in our hearts that will never be filled. Dick, we love you, we’ll miss you and we’ll continue to celebrate everything you accomplished during an amazing life.” She added that her husband’s “compassion and devotion to the people of the Himalayan region may prove to be his most enduring legacy.”

2. Her Mother Escaped Russia After the 1917 Revolution & Her Father Was a Surgeon 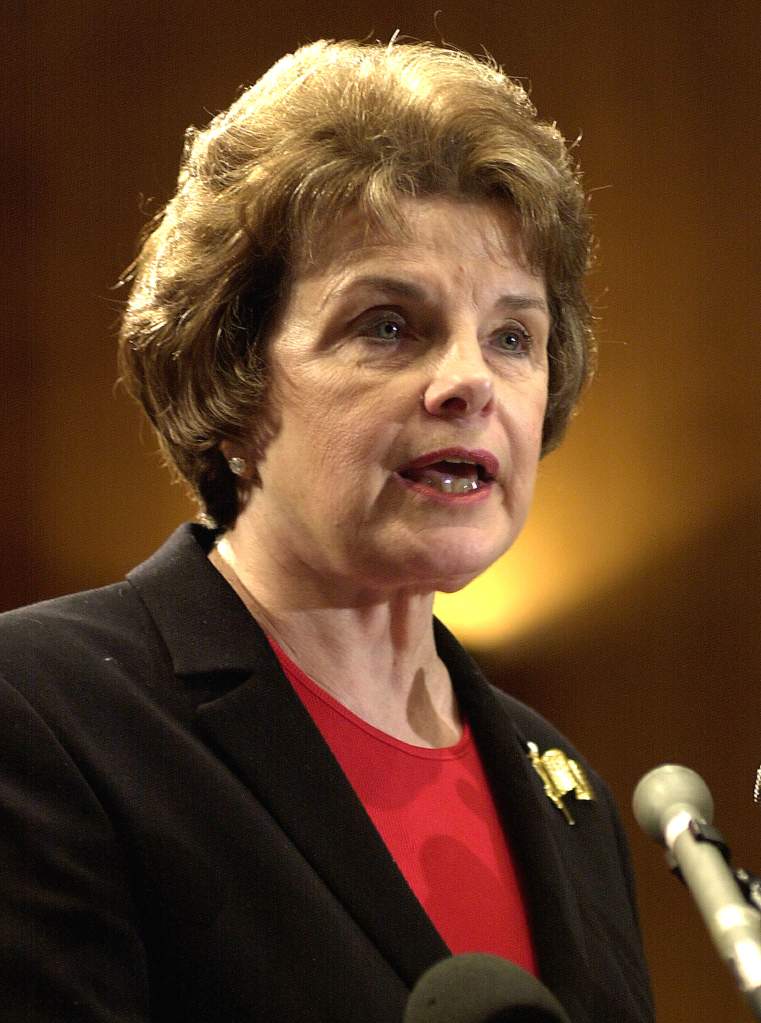 Dianne Goldman Feinstein was born in San Francisco in 1933. According to the Jewish Women’s Archive, she has two younger sisters.

Her father, Dr. Leon Goldman, was a medical professional. He worked as a surgeon and a professor at the University of California, San Francisco, the organization reported. According to an obituary published by the school, Dr. Goldman also served as an associate dean for the medical school and as chairman of the Department of Surgery from 1956 until 1963. He died in 1975 at age 71.

Feinstein’s mother was Betty Rosenburg Goldman. She died in 1983 at age 76 after suffering from a “chronic brain syndrome,” the New York Times reported at the time. The newspaper further reported:

The daughter of a Czarist army officer, Mrs. Goldman was born in St. Petersburg, Russia. The family fled during the 1917 revolution by driving a haycart across Siberia to Shanghai, then emigrating to Eureka, Calif.

Feinstein’s family history can be traced back to Russia on both sides. JWA said, “both of her parents came from Russian immigrant families.”

Her grandfather was active in the Jewish community in California and helped establish temples in the states, JWA reported. Feinstein attended a Jewish school as a child. However, she graduated from a Catholic high school, the Convent of the Sacred Heart, “in accordance with her mother’s wishes.” JWA said Feinstein was the first Jew to graduate from Sacred Heart. 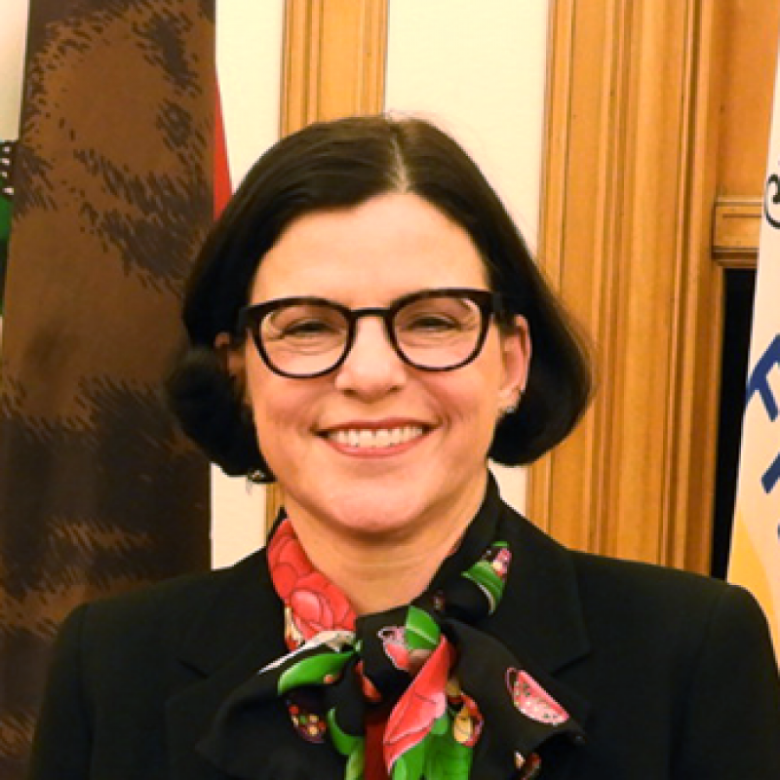 In 2000, she was named a San Francisco Superior Court Judge. Katherine Feinstein retired from the court in 2012.

In a 2014 interview with NBC Bay Area, Katherine Feinstein admitted the relationship with her mother had been strained at times due to the demands of Senator Feinstein’s job. “As a teenager, I was the most resentful of my mother not being like every other mother,” Katherine Feinstein told the outlet.

She added that she had no desire to run for Congress herself. “I don’t think campaigns always bring out the best in people.”

Katherine Feinstein is married to Rick Mariano and they have a daughter named Eileen, as noted in Senator Feinstein’s statement about Richard Blum’s death. Mariano works in real estate, according to Mother Jones.

Feinstein was about 23 years old when she married her first husband, Jack Berman, in 1956. Her name was Dianne Goldman at the time. Their daughter, Katherine, was born in 1957. (Katherine is Berman’s biological daughter but uses her stepfather’s last name, Feinstein).

The marriage ended in divorce in 1960, according to Berman’s obituary in the Los Angeles Times.

Berman fought for the U.S. in the Navy during World War II. The LA Times reported he was an attorney and served as “a defense counsel for the War Crimes Tribunal in Manila in 1946-47.”

Berman went on to serve as an assistant district attorney in San Francisco. In 1982, California Governor Jerry Brown named Berman as a Superior Court judge. Berman served on the bench until his retirement in 1992.

Berman passed away in 2002 at age 80, the San Francisco Chronicle reported. He experienced a heart arrhythmia while playing tennis, fell, and hit his head, the outlet reported. He died of complications from the head injury.

Two years after her divorce, Feinstein went on to marry neurosurgeon Bertram Feinstein in 1962.

According to the Jewish Women’s Archive, she knew him because he was one of her father’s colleagues. The organization added that Bertram was 20 years older than his wife.

The couple was married until Bertram’s death in 1978. The LA Times reported Bertram died of colon cancer. The outlet added the Feinsteins traveled to New Mexico for an “experimental heat treatment” to try to kill the disease but the procedure did not work.

Feinstein explained to the LA Times in 1998 why she was committed to fighting cancer in her role as a U.S. Senator: “You’re never the same after you go through it with a loved one. You’re determined to do something about it. Once the tentacles of cancer wrap around you and your family, it’s a life-shattering experience.”