Facebook Herschel Walker and wife Julie Blanchard have an estimated net worth between $29 million and $65 million.

Herschel Walker, a former professional football player running to represent Georgia in the U.S. Senate as a Republican, would be one of the wealthiest people in Congress if he were to win the election, based on a list of current senators by Investopedia.

Walker’s net worth is estimated to be between $29 million and $65 million, according to a financial disclosure form that all Senate candidates must fill out and the Atlanta Journal-Constitution. When disclosing how much their assets are worth, candidates are required only to submit ranges, which is the reason for the wide estimate.

U.S. SenateHerschel Walker reported more than $3.6 million in earned and non-investment income in 2021.

According to the Senate financial disclosure form, Walker earned $3,087,500 in 2021 through H. Walker Enterprises, LLC. The company’s headquarters are in Dublin, Georgia, per a search of business records on the state’s Secretary of State website. The business was first registered in Georgia in 2002.

H. Walker Enterprises includes multiple individual companies, according to the LLC’s official website. One of the companies doing business under the HWE umbrella is Renaissance Man Food Services, which is a food distribution service. Walker noted on the disclosure form that in 2021, he earned a salary of $214,062.50 from Renaissance Man Food Services in his role as a trustee.

Walker reported wages earned from two sports marketing agencies, Gary Takahashi Sports Marketing, LLC and LST Marketing Texas, LLC, for a combined $312,395. Walker also reported $35,000 from Total Capacity Entertainment and more than $21,000 for his role as a board member for Sotherly Hotels LP.

Walker brings in substantial sums for public speaking engagements, according to the Senate financial disclosure form. In 2021, he earned nearly $400,000 for speeches at organizations such as the Boys & Girls Club, the All Sports Association, women’s clinics, the Georgia Realtors Association and the Texas Bankers Association.

The disclosure form also lists other assets including stock holdings. The majority of Walker and Blanchard’s investments are in a variety of mutual funds. Blanchard has an IRA retirement account and Walker is enrolled in a retirement plan from the National Football League. 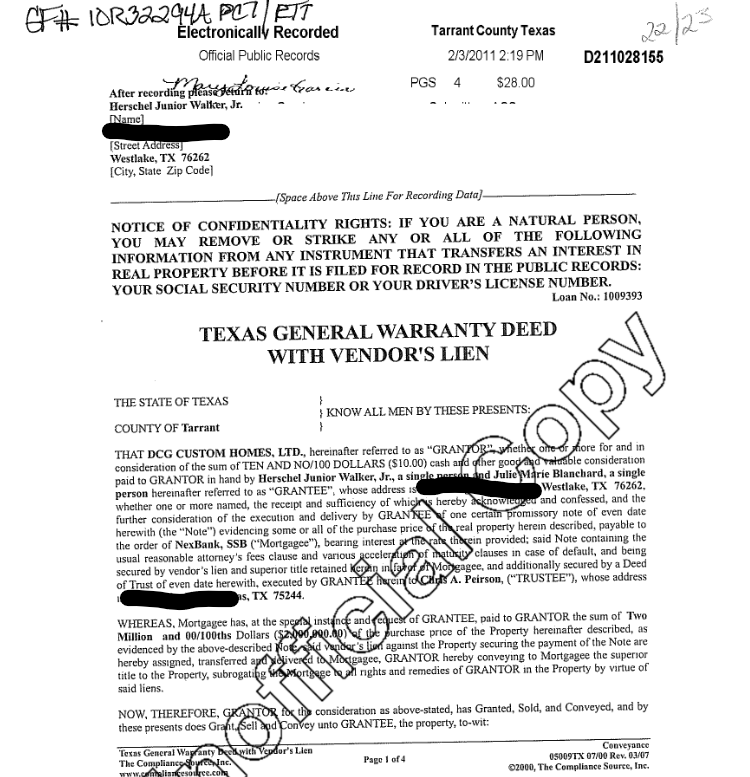 Walker and his second wife, Julie Marie Blanchard, tied the knot in 2021 but they owned property together long before they got married. Tarrant County property records show the couple bought their home in Westlake, Texas, in February 2011. Westlake is a suburb of Fort Worth.

Both Walker and Blanchard are listed as “grantees” on the deed. The document, which is publicly available through the County of Tarrant website, shows the couple paid $2 million for the house.

The value of the property has risen significantly since Walker and Blanchard made the purchase. The Tarrant County appraisal district website lists the market value as $3,368,389.

Realtor.com, ZillowHerschel Walker and Julie Blanchard’s Texas home has risen in value since they purchased it in 2011.

However, both Zillow and Realtor.com have higher estimates. Realtor.com estimates the home’s value at nearly $5 million as of October 2022, while the “Zestimate” is $4.1 million.

4. Blanchard Has Owned Her House in Atlanta Since at Least 1991; Walker Used This Address When He Filed His Campaign Papers

When Walker filed the paperwork to run for the U.S. Senate in Georgia, he used his wife’s address in Georgia, as 13WMAZ reported in 2021.

Blanchard has owned her Atlanta house since at least 1991. Fulton County property records show she purchased the home in December 1991 for $345,100 and she is the only listed owner. The public website shows the property is valued at $853,800 as of 2022.

Blanchard’s address and voter status came under investigation in 2021. She voted in Georgia during the 2020 presidential election but had an absentee ballot mailed to her and Walker’s home in Texas. As the Associated Press reported, Georgia election investigators ultimately dropped the case because although she and Walker spend time in Texas, Blanchard “has a Georgia driver’s license and vehicle registration, owns property in Atlanta and has utilities accounts in her name, has a business in Georgia and pays state income taxes.”

5. Blanchard Has Self-Employment Income But Walker Earns the Vast Majority of the Couple’s Money 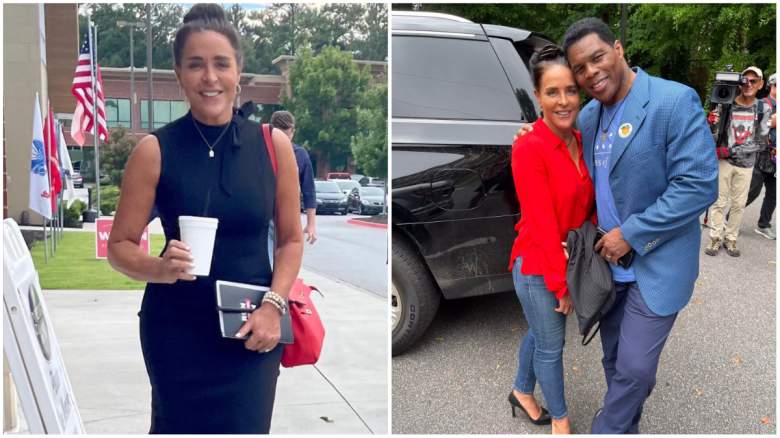 Georgia election officials said Blanchard has a business in the state, but few details are publicly available about it. Walker’s financial disclosure form includes that Blanchard has self-employment income from offering “Consolidated Broker Management.” The report says she earned more than $1,000 from this work in 2021.

Blanchard does not currently own any businesses in Georgia, according to state business records.

The form also shows that Blanchard earned a salary of more than $1,000 from Renaissance Man Food Services.

Loading more stories
wpDiscuz
0
0
Would love your thoughts, please comment.x
()
x
| Reply
What is the estimated net worth of Georgia Senate candidate Herschel Walker and his wife Julie Marie Blanchard?