Andre Thomas is accused of shooting at restaurant workers at Dickey’s BBQ Pit in Houston after he became angry because they did not give him enough BBQ sauce, Harris County prosecutors say. The shooting happened on January 21, 2022, and details about the case emerged after he made a court appearance on February 28 for his arraignment.

Thomas, who was out on bond on pending charges in another case, was arrested on February 23, 2022, and charged with two counts of aggravated assault with a deadly weapon, according to Harris County court records. He has other pending felony charges against him including a separate aggravated assault charge, burglary with intent to commit other felonies, being a felon in possession of a weapon, retaliation, aggravated assault on a family member and verbal harassment.

Thomas Waited for the Workers to Leave the Restaurant, Followed Them in His Car & Then Shot Into Their Vehicle, Prosecutors Say

Jill Wells, of the Harris County District Attorney’s Office, told Click2Houston, “It’s certainly bizarre.” She said after Thomas picked up his order from the restaurant, he called from the parking lot threatening to come back and “shoot up the place,” because they did not give him enough BBQ sauce in his to-go order.

Wells said Thomas waited in the restaurant’s parking lot for the workers to leave and then shot at them. “He was by some nearby gas pumps waiting for them to leave,” Wells told the news station. She said he then followed the workers down the road in his car and shot into their vehicle. “He strikes one of the complaint victims five times, breaking a bone in their arm. The other victim, thank goodness, was not shot.”

In another pending case, Thomas is accused of threatening someone with a gun on February 6, 2022, after breaking into a home. Other details of that incident were not immediately available. He was arrested by the Harris County Constable District 5 on February 17, 2022, and charged with aggravated assault and burglary. 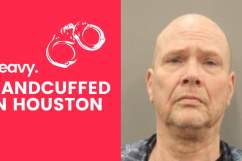 According to court records, Thomas has a previous felony conviction from 2017 in Grimes County, Texas. He was convicted of attempted assault on a family member, impeding breath. Thomas was sentenced to eight months in jail in that case. Thomas was arrested in Harris County in 2018 on a second-degree felony charge of aggravated assault causing serious bodily injury, but pleaded guilty to misdemeanor assault on a family member and was sentenced to a year in jail, records show.

Wells, an attorney with the Harris County DA’s office, told Click2Houston, “In this case, the judge immediately revoked his old bonds. He is at no bond on all of his new cases and again today, she reaffirmed her decision.” Harris County Jail records show Thomas remains jailed without bond as of March 1, 2022.

According to court records, Thomas is scheduled to appear in court again on April 26, 2022. His attorney could not be reached for comment by Heavy on Houston. Dickey’s BBQ Pit also did not immediately respond to a request for comment from Heavy on Houston about the shooting and the condition of the employee who was injured.

Loading more stories
wpDiscuz
0
0
Would love your thoughts, please comment.x
()
x
| Reply
Andre Thomas is accused of shooting at restaurant workers at Dickey's BBQ Pit in Houston after he became angry because they did not give him enough BBQ sauce, prosecutors say.