Graphic videos have emerged of the Travis Scott concert in Houston, Texas, in which a stampede helped lead to the deaths of at least eight people. You can watch some of the videos throughout this article, but be aware that they are graphic and disturbing.

The eight victims who died at the festival have been identified.

“Last night was tragic on many different levels, and this is a very, very active investigation. We will probably be at it for quite some time to determine what exactly happened,” Houston Mayor Sylvester Turner said in a news conference of the tragedy at AstroWorld Fest on November 5, 2021.

“Based on our latest information, eight people are reported dead from the event last night,” he said in the November 6 news conference, indicating he could not remember anything “of this magnitude” taking place before in Houston.

Travis Scott speaks out following the tragedy at the Astroworld Festival. pic.twitter.com/BzU9abBp3N

Houston Police Department Executive Assistant Chief Larry Satterwhite told ABC13: “Once we started having the mass casualty incident, they were starting CPR on several people, and it happened all at once. It seemed like it happened over the course of just a few minutes. Suddenly, we had several people down on the ground experiencing some type of cardiac arrest or some type of medical episode.”

Another #disturbing video- Travis Scott continues to sing as he watched a unconscious fan at #ASTROFEST #AstroWorld2021 #Festival– At least 11 killed and 300+ injured.

One video shows Scott continuing to sing as a concertgoer appears to be passed through the crowd unconscious. Turner said authorities were talking with “Travis Scott’s people,” witnesses and people hospitalized to get a better picture of “what went wrong … what were the missteps.”

He said they would be looking at “as much of the video as possible,” in addition to security plans.

#ASTROWORLDFest “The show must go on” is not meant to be taken literally when people are dying. I hope the families of those lost and all those in attendance who did help the injured are being supported right now. #TravisScott pic.twitter.com/tGrJ6gBeqE

The mayor said of the victims: “In terms of their ages one is 14, one is 16, two are 21 years of age, two are 23, one is 27 and one remains unknown at this time. So a total of eight that are reported dead. Six of the eight family members have been notified, and we know at least one is outside Houston Harris County.”

Turner added: “Last night, 25 were transported to the hospital. Thirteen are still hospitalized, including five that are under the age of 18. No one is reported missing. Four of the 25 have been discharged from the hospital.”

“There are a lot of unanswered questions,” Turner said. He cautioned people to not “buy into the rumors” on social media.

Just in case some of you didn’t see it. You can clearly see two people desperately try to resuscitate two young adults and or teens during Travis Scott’s festival. The look on these teens faces is heartbreaking. #astroworld pic.twitter.com/9oiegQe1sE

“It was like hell,” said Nick Johnson, 17, to The New York Times. “Everybody was just in the back, trying to rush to the front.”

“People were literally grabbing and pinching at my body trying to get up from the ground,” Chris Leigh, 23, told The Times. “I was fighting for my life; there was no way out.”

You can’t tell me Travis Scott didn’t see this kid getting resuscitated while he was up there doing the robot #ASTROWORLDFest pic.twitter.com/cjqsiK29BS

“Young people with bright futures — those were the people who were at the event,” said Lina Hidalgo, the Harris County executive.

everyone was yelling to stop and you still continued with the show how can you explain this bro pic.twitter.com/2UQRPZt144

She said her team was trying to “untangle as much as we can about what might have led to this.” 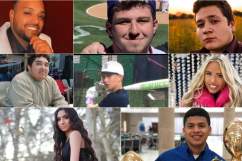 These Are the Victims of the Houston Astroworld Festival Concert Tragedy

A Security Guard Was ‘Pricked’

Another video- #Disturbing video shows people #jumping on top of the police personal cars while they were trying to get #unconscious people out of the #crowd.#Houston #ASTROWORLDFest #TravisScott #AstroWorld #music #festival #Houston#KHOU11 pic.twitter.com/tubnfQIVPS

Police Chief Troy Finner said a security officer was pricked in the neck while restraining a concertgoer and was revived with Narcan. “The medical staff did notice a prick that was similar to a prick that you would get if somebody was trying to inject,” he said in the news conference.

She said that Live Nation and AstroWorld put together a security and site plan with the City of Houston agencies and Harris County.

My experience at Astroworld. RIP to those who lost their lives that night. #astroworld #travisscott pic.twitter.com/Bwo7KOAtol

According to The New York Times, Scott “continued playing through his set of music, urging the crowd on at times, at other times pausing to acknowledge that something appeared to be wrong.” Live Nation stopped the concert early but it was 40 minutes after the incident started, according to The Times.

Why didn’t you do anything???? what the hell pic.twitter.com/fLcCIVAUv9

In the news conference, Finner defended the decision not to suddenly shut down the concert, saying, “You cannot just close when you got 50,000 and over 50,000 individuals. We have to worry about rioting, riots, when you have a group that’s that young.”

Travis Scott ask "Who asked me to stop?" While fans die in the crowd. #ASTROWORLDFest pic.twitter.com/tqbTMieOHy

“They could have had over 200,000 people in this venue; this venue was limited to 50,000,” said the Houston fire chief, Samuel Peña, at the news conference.

“We had more security over there than we had at the World Series games,” Turner said.

The Times reported that the most common cause of death in such situations is compressive asphyxia, which means people’s airways are restricted by the crowd.

Loading more stories
wpDiscuz
0
0
Would love your thoughts, please comment.x
()
x
| Reply
Graphic videos have emerged of the Travis Scott concert in Houston, Texas, in which a stampede helped lead to the deaths of at least eight people.