Jeff Halperin is the husband of Kari Lake, the Republican candidate for governor in Arizona. The couple has been married for 24 years and they have two children together.

According to the Associated Press, Lake came up short in the race for governor. The outlet has projected Democrat Katie Hobbs as the winner.

1. Halperin & Lake Worked at the Same TV Station in Phoenix

This win is just as much Jeff’s win as it is mine. He was there every step of the way. If you see him out on the campaign trail with me, be sure to say thank you. He’s pouring everything he has into this fight.

Halperin and Lake worked at the same local TV station in Phoenix, Arizona. As TIME magazine reported, Halperin was a videographer at the NBC affiliate in Phoenix, which is KPNX-TV.

Halperin’s LinkedIn account has been hidden or deleted, but an archived version of his page shows Halperin’s previous jobs included “photojournalist at NBC” and as a news photographer at WNYT-TV, which is in Albany, New York. 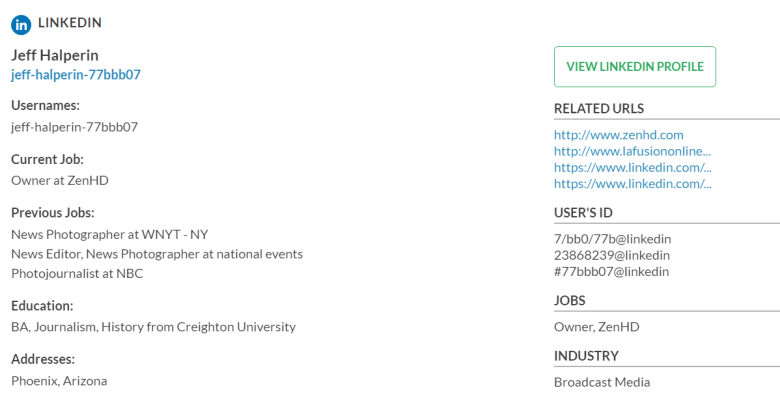 Lake was hired as a weekend weather anchor for KPNX-TV in 1994, the Arizona Daily Independent reported. She worked in that job for four years before moving to Albany, New York, for one year. She came back to Phoenix in 1999 and was hired as an anchor at Fox 10. She remained there for more than 20 years before she resigned and became a politician.

Halperin and Lake tied the knot amidst all of their moves. They have been married since September 1998. Lake celebrated their 20th anniversary in 2018 with a Facebook post that read, “Celebrating 20 ‘chalk marks’ on the marriage chalkboard down at Maricopa County Superior Court with my stud-muffin-in-residence.”

2. Halperin Is Now an Independent Videographer 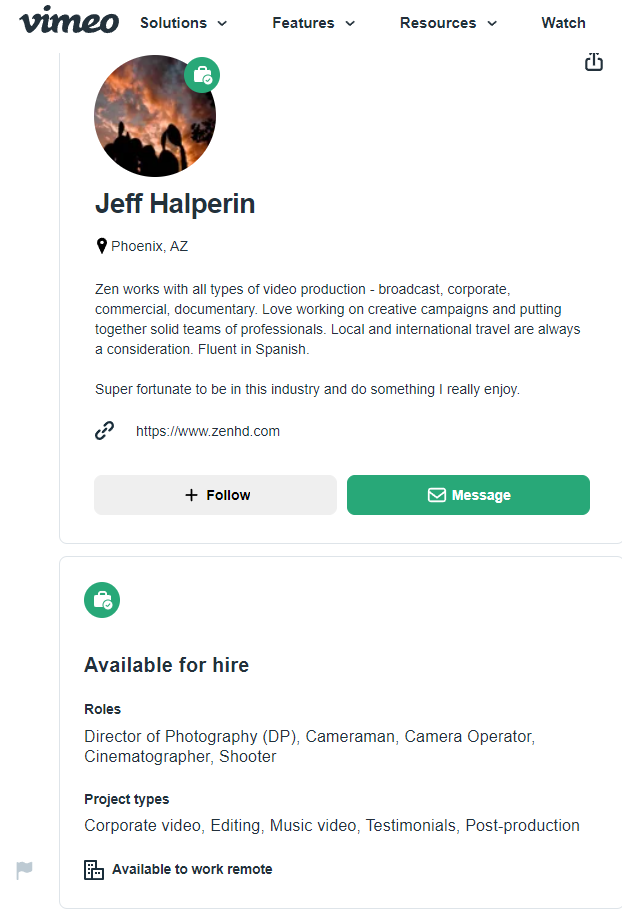 At some point, Halperin left the local news industry to become an independent videographer. According to his Facebook page and Vimeo account, Halperin runs his own company, called Zen HD.

As of this writing, Zen HD’s website was under construction. But the Vimeo account states that Halperin’s company “works with all types of video production – broadcast, corporate, commercial, documentary.”

Halperin included that he is available for hire as a “Director of Photography (DP), Cameraman, Camera Operator, Cinematographer, Shooter.” He also wrote a personal message on the Vimeo page: “Super fortunate to be in this industry and do something I really enjoy.” 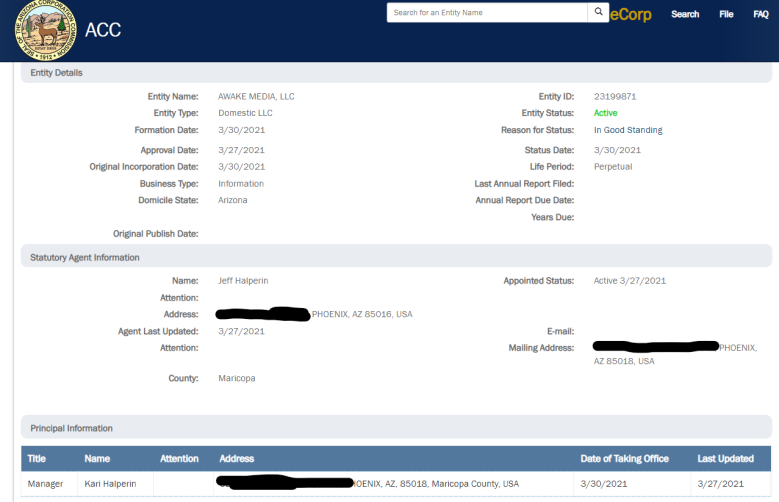 Zen HD is not registered as an independent business on the Arizona Secretary of State’s website. However, Halperin registered “Awake Media LLC” in March 2021 in Maricopa County. His wife is listed as the manager of the organization.

3. Lake’s Husband Has Provided Videography for Her Campaign But Only Their Daughter Has Received a Paycheck

Halperin has kept a relatively low national profile amid his wife’s campaign for the governor’s race in Arizona. However, even though he has not been noticeably vocal, he is often at Lake’s side with a camera.

As The New York Times reported:

Another constant presence is Ms. Lake’s husband, Jeff Halperin, a videographer who watches his wife’s every move on the campaign trail through the frame of his digital camera, compiling footage for political ads and recording interviews with reporters. Her campaign has occasionally posted such clips to show her battles with the media, which she has increasingly portrayed as hostile to her candidacy.

Halperin also accompanied Lake to a meeting with former President Donald Trump in August 2021. Lake wrote on Facebook, “Best birthday ever! Spent it with my two favorite guys! Thank you so much, President Trump.” 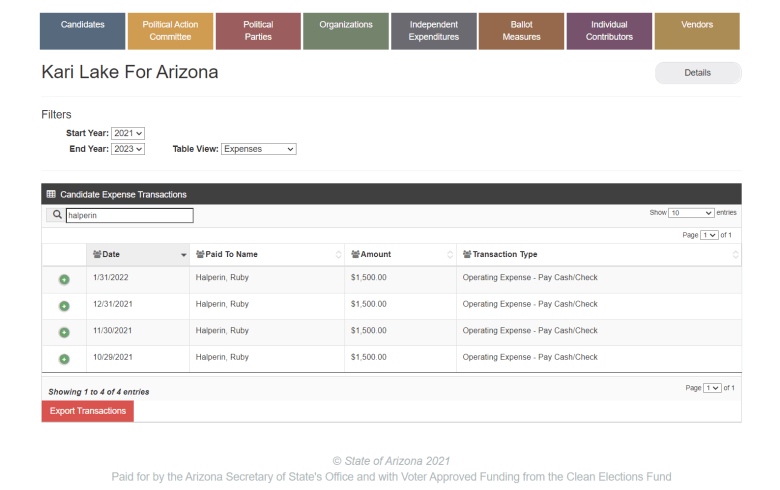 Arizona Secretary of StateJeff Halperin and Kari Lake’s daughter, Ruby, has been paid by the campaign as a consultant.

Halperin’s camerawork may have been voluntary. A search of campaign finance records on Arizona’s Secretary of State’s website does not bring up any payments made to Halperin.

But the couple’s daughter, Ruby Halperin, has received at least four checks of $1,500 apiece from the campaign. Ruby was paid as a “consultant” according to the paperwork, in her role as a “Live Coordinator” for the organization “Turning Point USA.”

So proud of my husband who's been nominated for a national Sports Emmy for his work on the ESPN E:60 story on NBA player @EnesKanter who is courageously standing up to an oppressive regime at great personal risk. Such an amazing story that is deserving of recognition. pic.twitter.com/ihqMxkvJgD

Before he was filming footage for his wife’s campaign, Halperin’s professional work included sports. He worked on an ESPN E:60 documentary on professional basketball player Enes Kanter.

The documentary, called “Enes Kanter: Enemy of the State,” is about the athlete’s political activism in his native country of Turkey. The video is available on Vimeo.

Halperin and the rest of the production team received a 2020 Emmy nomination in the “Outstanding Sports Journalism” category, although they did not win. Lake celebrated the nomination on Facebook and wrote that she was “so proud” of her husband. She added, “Such an amazing story that is deserving of recognition.”

5. Halperin Is of Colombian Descent

Halperin is Latino. His family was originally from Colombia, according to social media posts from Lake.

Lake included a joke about herself in this October 5, 2022, Facebook post: “What great event featuring #LatinosForLake and so many Latino Business owners and greats! 1/3 of the people in Arizona are Latino. 3/4 of the people in my home are Latino. My husband and children are Americans of Colombian descent. I am the holdout Gringo. 😜 Arizona is such a beautiful melting-pot. It’s all about the American dream. Maybe we should call it the Arizona dream! Hardwork, faith, family, and love for our Beautiful Arizona! When we come together as Arizonans we are more powerful.”

READ NEXT: How Wealthy is Ohio Senate Candidate JD Vance?

Loading more stories
wpDiscuz
0
0
Would love your thoughts, please comment.x
()
x
| Reply
Kari Lake, has been married to her husband, videographer Jeff Halperin, for more than 20 years. Get to know more about him here.