LaShawn McNeil was named as the suspect accused of shooting a New York police officer to death and leaving another officer clinging to life.

In a statement, the New York Police Department identified the deceased officer as Jason Rivera. He was only 22 years old.

“Tonight, an NYPD police officer has lost his life — murdered — and another is gravely injured. The pain is incomprehensible for their loved ones, fellow officers, and NYC. Pray for the family of our young officer & for his partner who lies in a hospital bed fighting for his life,” wrote New York Police Commissioner Keechant Sewell on Twitter.

1. The Officers Were Ambushed as They Walked Down an Apartment Hallway, Police Say 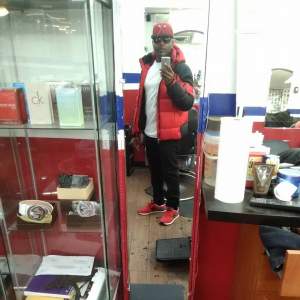 In a news conference, Sewell said that the three officers who responded to the ultimately deadly call for service were “listening to a mother who called needing help for her son. As the officers were compassionately trying to provide aid to a 47 year old man, he suddenly and without warning opened fire on them. In a moment a young 22 year old life was ended and another forever altered. Our department is hurting. Our city is hurting. It is beyond comprehension; I am not sure what words if any will carry the weight of this moment and what we are feeling.”

Police said in the news conference that the officers went to the apartment at 6:15 p.m. in the evening on January 21, 2022. They were from the 32nd precinct. They were responding to a 911 call about a “family dispute.”

Watch as NYPD executives join @NYCMayor to share details of the NYPD officers shot earlier this evening in Harlem. https://t.co/rvp9ffViWz

A woman was “disputing with her son,” but she mentioned no injuries or weapons. Officers entered the apartment and spoke to the female caller and her son. It was a brief conversation. She said that the son she was “disputing with was in the back bedroom.”

The dwelling was described as an open one-bedroom apartment with a 35-foot hallway with a bedroom at the end. One officer remained with the two family members while the other two officers went to the back bedroom. Police described the hallway as very tight and narrow.

They say McNeil swung open the door and fired numerous shots, striking both officers, one fatally, and leaving one in critical condition.

As McNeil tried to exit the apartment, the third officer shot him in the right arm and head.

2. Rivera Was Described as a Son, Husband & Friend

Tonight, we mourn the loss of a hero officer — a son, husband, and friend. Only 22 years old, Police Officer Jason Rivera was murdered in the line of duty. We vow to #NeverForget Jason as his fellow Finest vow to honor his tremendous legacy of service & the ultimate sacrifice. pic.twitter.com/5zsx45XiM4

The NYPD released Rivera’s photo and a tribute to him.

“Tonight, we mourn the loss of a hero officer — a son, husband, and friend,” the department wrote.

“Only 22 years old, Police Officer Jason Rivera was murdered in the line of duty. We vow to #NeverForget Jason as his fellow Finest vow to honor his tremendous legacy of service & the ultimate sacrifice.”

In the news conference, Sewell said, “Tonight a 22-year-old son, husband, officer and friend was killed because he did what we asked him to do. Countless officers line the halls of this hallway after carrying him in and grieve for their brother while praying with everything they have for the other.”

She added: “I am struggling to find the words to express the tragedy we are enduring. We are mourning, and we’re angry. The NYPD. New York City. All of us. As I stand here in Harlem Hospital tonight, a New York City police officer has lost his life, murdered, and another one is fighting for his life to survive. The pain their families are experiencing is not something anyone can put into words.

A fundraiser was created to help Rivera’s family through Fund the First. It reads:

Last night we tragically lost one of our own in the NYPD – Police Officer Jason Rivera. As we mourn his death, we want to come together to show his family all the support they deserve during this trying time.

I personally worked with Jason in the 32 Precinct and all I can say is that he was an absolutely wonderful person and as a new officer on the job, he was always smiling and excited to go out no matter what his call of duty was. His cheer will be missed and will forever be in my prayers.

This fundraiser is to collect funds for his family to assist with their support system. A donation of any amount goes a long way. Please consider donating and sharing this fundraiser.

3. McNeil Has an Arrest History for Weapons & Narcotics Offenses 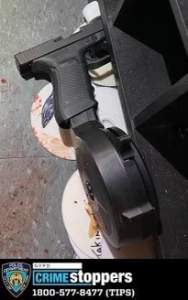 NYPDThe gun used in the shooting of the officers.

According to police, McNeil, 47, has one prior arrest in New York City for a felony conviction of narcotics from 2003 and is on probation for it.

He was four arrests outside New York City. One is in South Carolina from 1998 for unlawful possession of a weapon. One was a 2002 assault on a police officer in Pennsylvania. One was a felony drug arrest and misdemeanor narcotics arrest in 2003 in Pennsylvania.

Police recovered a Glock .45 with a high-capacity magazine that holds up to 40 additional rounds. They say the firearm was stolen in Baltimore in 2017, and they are still working to trace it.

They called it a “brutal, senseless, ambush of two of our officers.”

4. McNeil, Who Is Blind in One Eye, Believed in ‘Wild Anti-Government Conspiracy Theories,’ a Report Says 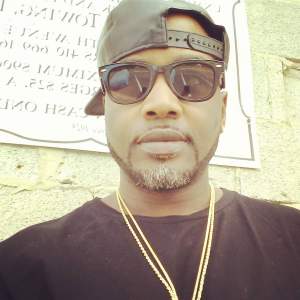 According to The New York Post, citing a source, McNeil “blamed his mother for being blind in one eye and argued with her over wild anti-government conspiracy theories” before she called police.

The Post reported that McNeil “got deeper into conspiracy theories after moving to New York City in November and even believed he was god and no one could tell him what to do.”

His mother is named Shirley Sourzes, according to The Post. 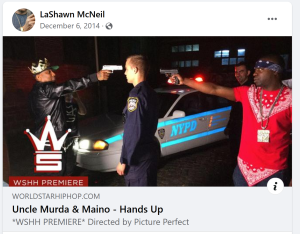 On Facebook, McNeil wrote that he went to Beach Channel High School, lived and was from Far Rockaway, and was in a relationship.

He mostly shared joking graphics and videos, but he also shared one video captioned, “Young Pharaoh Exposes The Illuminati And Rituals In Hollywood!!!” He shared another video of a man being confronted by a child protective services agent with officers present that is captioned, “Man Destroys Cops and CPS Agent.”

According to The Post, he also “liked an anti-Semitic propaganda video from Trinidad.”

Another page of his contains a man holding a sign that reads, “We must stop killing each other.”

He wrote, “This is what they don’t want us to know about ourselfs and the underworlds its not racist its facts master thyself so we can return to our rightful place family.”

He shared a video called, “Heritage of the Moors in the Americas,” and another titled, “Charles Manson on Black People.” In 2014, he wrote, “Stop eating stop eating McDonald’s you’re eating human children mainly people of color.”

That same year, he wrote,

Listen that person y’all call Jesus is not the Christ his real name is Iesu I-e-s-u we’ve been lied to for over 2000 years they replaced our culter with religion seek the truth and thy shall find no disrespect to those who believe but to believe means u don’t know the truth but I rather know the truth then believe in it…. If the pale complexion is a curse abomination to the planet then who are u praying to in your house of worship if christianity is so righteous why did they force it upon people kill people in the name of Christianity wake up people you are being deceived.

Sewell said that five officers have been shot in New York City in four incidents, praising the “valor and sacrifice of the NYPD.”

New York Mayor Eric Adams said in the news conference, “We must save this city together; that is what we must do.”

He also referred to “five officers” who “were shot in this city.”

Adams said there are no gun manufacturers in New York city. “We don’t make guns here,” he said.

Loading more stories
wpDiscuz
0
0
Would love your thoughts, please comment.x
()
x
| Reply
LaShawn McNeil was named as the suspect accused of shooting a New York police officer to death and leaving another officer clinging to life.