Twitter A man jumps off a bridge in Memphis, TN.

A graphic and disturbing video that shows a man who jumps off a bridge in Memphis, Tennessee, has gone viral.

The video shows the man raise his arm as he is standing on top of an overpass along I-40 in Memphis on Tuesday, April 5, 2022. He then jumps.

The video, which was widely circulated on Twitter and other social media platforms. is bringing awareness to suicide prevention. If you or a loved one needs help or is having thoughts of harming yourself, please reach out to get assistance. You can call the National Suicide Prevention Lifeline 24 hours a day at 800-273-8255. English, Spanish, and other languages are available.

The Disturbing Video Shows the Man Dive Off the Bridge 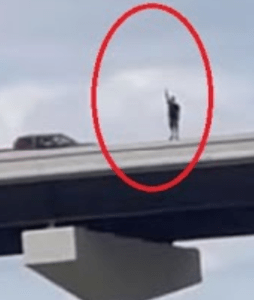 Heavy is not going to embed the video because it’s disturbing; it shows the man jumping off the bridge, albeit from a distance. The video was widely circulated on Twitter, YouTube, and other social media platforms and can be found here. The Twitter user who posted it wrote, “Man in Memphis jumps off bridge today. SMH RIP #Suicides #SuicidePrevention #suicide #RIP #memphis.” It’s been viewed thousands of times, and it was trending on the Google Mobile app.

People expressed sadness for the man in the comment thread under the Twitter video. Here are some of those comments:

“That was unfortunate for all parties involved. Enjoy your time with friends and family, we are all we got.”

“WHY POST THIS THO!???? He has family, friends etc! Who wants to find out their loved one passed this way! Then to watch exactly how it went down! So sad! Prayers for the family & the man that felt this was the way out.”

🚨 TRAFFIC ALERT🚨
I40 at Sam Cooper westbound is closed, and traffic is being diverted for an unspecified time. The closure is due to an ongoing death investigation.

Please use an alternate route. pic.twitter.com/6wUVeRoFrk

According to WREG-TV, all of the westbound lanes on I-40 at Sam Cooper Boulevard wetre closed due to the man jumping off the bridge on Tuesday, April 5, 2022.
A tweet from Memphis police confirmed this. It read,

I40 at Sam Cooper westbound is closed, and traffic is being diverted for an unspecified time. The closure is due to an ongoing death investigation.

Please use an alternate route.

The message came across as a “traffic alert.”

Memphis police told the television station that the man jumped from the overpass at 4:15 p.m. on April 5. He was initially taken to the hospital, but police later referred to it as a “death investigation,” according to WREG. Heavy has reached out to Memphis police for additional details about the man and his death.

The man’s name was not released.
According to Fox13, traffic was shut down for some time as a result of the death.

According to the Commercial Appeal, traffic was back up by 6 p.m. on Tuesday.

Loading more stories
wpDiscuz
0
0
Would love your thoughts, please comment.x
()
x
| Reply
A graphic and disturbing video that shows a man who jumps off a bridge in Memphis, Tennessee, has gone viral.