Facebook Two pets pigs chased a bear out of their enclosure in New Milford, Connecticut.

Good pig! Two domesticated pigs are getting a lot of attention online after successfully chasing off a black bear that had climbed into their enclosure in New Milford, Connecticut. The pigs’ owner told WTNH-TV the animals, named Mary and Hammy, were not injured.

The confrontation was recorded on a Ring camera, which the owners posted on Facebook and TikTok and shared with local media. The videos are embedded below.

One of the pigs’ owners, Rebecca Shaw, said she first realized something was going on after hearing her brother and son yelling about a bear on the property, she explained to NBC Connecticut. She said she hadn’t heard an alarm go off, and her next step was to check the recently recorded footage from the Ring camera that she has overlooking the pigsty.

She saw footage of a black bear hanging out next to the pen. “He was cute at first, you know, playing in the hay, doing his tumbling like it’s catnip,” Shaw told the TV station.

Additional footage Shaw shared on Facebook shows that the bear had a tough time figuring out how to get inside the pen. The bear makes its way along the outside of the enclosure before gingerly stepping onto the top of the fencing.

Eventually, the bear figures it out and hops down into the pen. The white pig, Mary, immediately charges at the bear and pushes her foe against the side of the enclosure.

The bear fights back and gets away from Mary. Then the brown pig, Hammy, tags in and sprints at the bear.

The bear backs into a corner, and after considering its options for a few moments, climbs the fence and hops out of the pen. The video shows that the bear hung around by the hay for a while longer before eventually running out of the camera’s range.

Shaw told NBC Connecicut she’s “very proud” of both pigs for defending themselves. She added that she’s grateful her pets were not injured.

The Owners Think the Bear Was Going After Something In the Pen, Not the Pigs Themselves

Another of the pigs’ owners, Kevin David, reassured WTNH-TV that Mary and Hammy were fine after the confrontation with the bear. “They’re some heavy pigs and we’re pretty sure that bear is still a cub.”

He theorized that the bear had not intended to attack the pigs. David told the TV station he believes the bear had been interested in “what the pig was digging for.”

The incident happened during the evening hours of March 17, according to the timestamp on the videos shared on social media. Shaw wrote on TikTok on March 21, “Both pigs Came out of this without a scratch and are fine. The bear has been back but has not been near the pigs.”

After the incident, Shaw created a Facebook page for her pets called “Hammy & Mary The Bear fighting Pigs.”

The Bear Population Has Been Growing in Connecticut 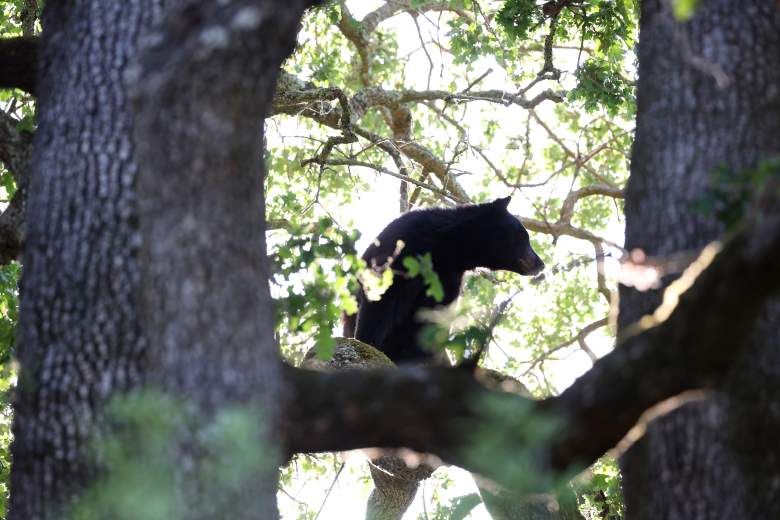 GettyA black bear sits in an oak tree behind a home on May 13, 2021 in San Anselmo, California.

The black bear population is growing in Connecticut, according to the state’s Department of Energy and Environment Protection. Officials recommend using electric fences to protect livestock. Shaw told NBC Connecticut she plans to add electric fencing to Mary and Hammy’s pen in the future.

According to the U.S. Department of Agriculture, black bears are “‘food-driven’ animals, meaning most conflicts result from a bear’s drive to meet its nutritional needs.” The department explained on its website that black bears may go after smaller livestock if the opportunity presents itself:

Attacks are usually predictable. Bear or bear sign may be observed in the area prior to an attack and bear may stalk livestock before attacking. Once a depredation occurs, it is likely to happen again. Sheep are most vulnerable on remote rangelands when bedded down or scattered. Some research has shown that cattle and swine are taken more often in the spring, while sheep are taken more often in autumn. The frequency of attacks (i.e., multiple animals injured over multiple days) tends to be related to the prey’s body size— the smaller the livestock, the less time between attacks. Similarly, the size of the bear is often a determining factor in the age and size of the prey. Sick or injured bears often prey on livestock.

However, as the National Park Service explains on its website, bear attacks are rare. The agency says “most bears are only interested in protecting food, cubs, or their space.”