Virginia “Ginni” Thomas is a conservative activist and the wife of Supreme Court Justice Clarence Thomas. The couple has been married since 1987.

1. Ginni Thomas Could be Called Before the January 6 Committee Over Controversial Texts 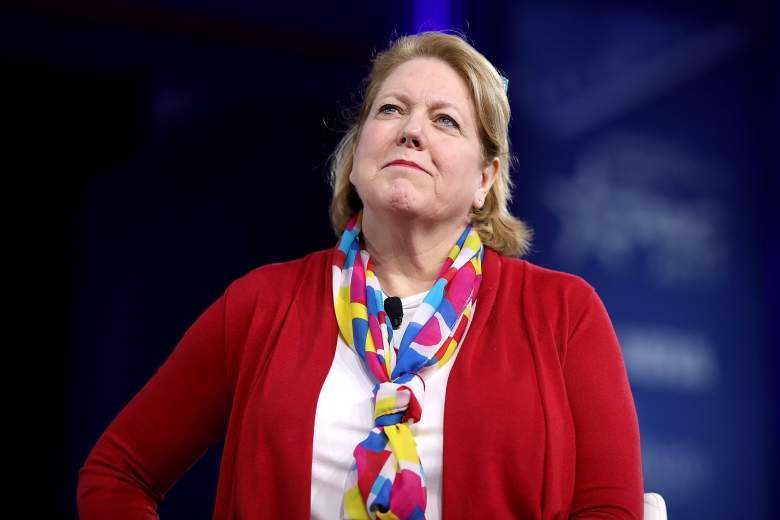 Ginni Thomas and her husband have been facing scrutiny over text messages she exchanged with President Donald Trump’s Chief of Staff, Mark Meadows, following the 2020 election. As the Wall Street Journal reported, the texts came out after the House committee investigating the January 6, 2021, Capitol attack received White House records. The newspaper reported Justice Thomas “was the lone dissent on Jan. 19 when the court rejected Mr. Trump’s emergency request to block the transfer of White House records to the Jan. 6 committee.”

Reporters Bob Woodward and Robert Costa of The Washington Post obtained copies of the texts. According to the newspaper, Ginni Thomas referred to President Joe Biden’s win as “the greatest Heist of our History” and urged Meadows to help overturn the election. As CBS News reported, it was not clear whether Justice Thomas was aware of his wife’s text messages.

In an interview with the Washington Free Beacon in early March 2022, Ginni Thomas confirmed she had attended the January 6 rally, but that she left early because she was cold. She said she was not involved in organizing the rally and dismissed the idea that her activities created a conflict of interest for her husband. “Like so many married couples, we share many of the same ideals, principles, and aspirations for America. But we have our own separate careers, and our own ideas and opinions too. Clarence doesn’t discuss his work with me, and I don’t involve him in my work.”

The House select committee investigating January 6 is “likely” to call Ginni Thomas for an interview, CNN reported. The committee has subpoena power.

Meanwhile, Democratic Senator Ron Wyden has called on Justice Thomas to “recuse himself from any case related to the January 6th investigation, and should Donald Trump run again, any case related to the 2024 election,” per a statement from his office. The Washington Post reports Sen. Cory Booker and Sen. Amy Klobuchar are also calling for his recusal.

2. Ginni Thomas Grew Up in Nebraska & Graduated From Law School But Doesn’t Appear to Have an Active Law License Now

Ginni Thomas was born Virginia Lamp in 1957 and was raised in Omaha, Nebraska. Her parents, Donald and Marjorie Lamp, were “active in Nebraska Republican politics,” the Baltimore Sun reported in 1991. According to her mother and father’s respective obituaries, they both died in 2009. Ginni Thomas has two brothers and one sister.

In an endorsement video for Senator Ted Cruz in 2016, Ginni Thomas credited her mother for inspiring her political activism. “A lot of people know me because of my husband who’s on the Supreme Court, but the truth is I’m my mother’s daughter,” Ginni Thomas said. She explained that Marjorie Lamp served as a delegate at the 1968 Republican National Convention.

Ginni Thomas studied business communications and political science at Creighton University, the Baltimore Sun reported. After working for Republican Rep. Hal Daub on Capitol Hill in the early 1980s, she returned to Creighton University for a law degree.

A Creighton School of Law article from 2001, published after Justice Thomas and his wife visited the school, confirms that Gini Thomas graduated from the law school. The article mentioned her parents were still living in Omaha at that time.

As of this writing, Ginni Thomas does not currently appear to be a licensed attorney. Her name does not come in searches of attorney records in Washington, D.C., Maryland or Virginia. She is also not listed on Avvo, a national database of lawyers.

3. Ginni Thomas Remains Active With Conservative Political Groups & President Trump Appointed Her to the Library of Congress Trust Fund Board 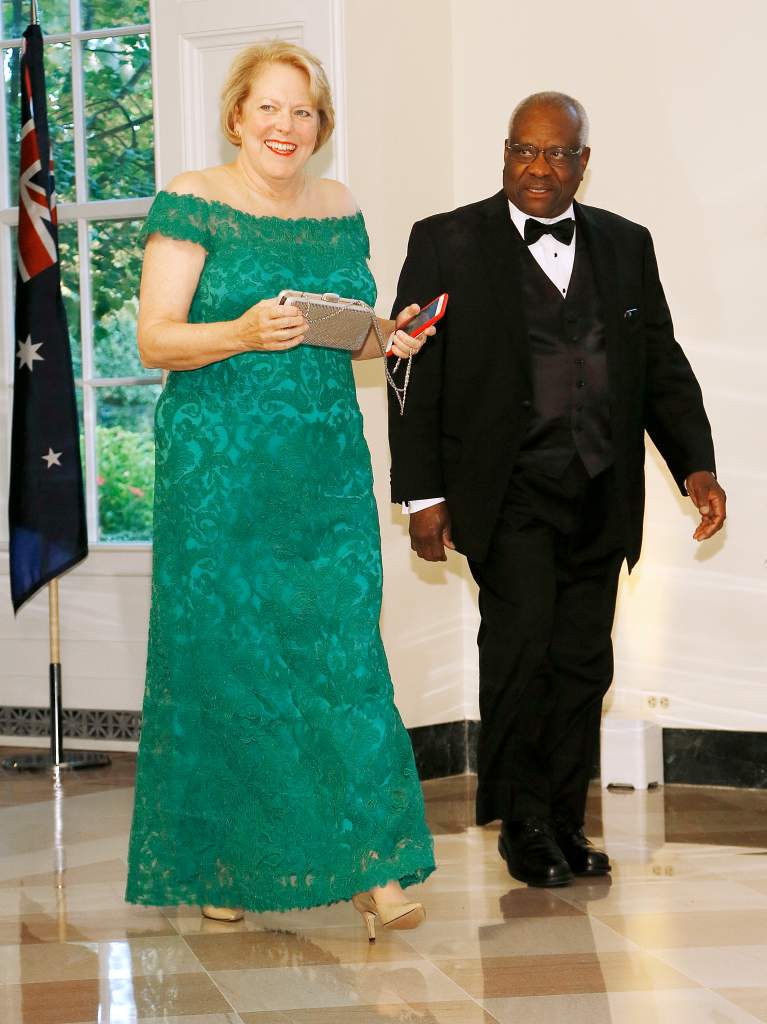 Ginni Thomas is currently on the board of the Council for National Policy (CNP), she confirmed to the Washington Free Beacon, but said her activity with the group is limited. “At CNP, I have moderated a session here and there. I delivered some remarks there once too,” Ginni Thomas said. On its home page, the CNP describes itself as “leading the conservative movement” and states that it believes in limited government and strong national defense. The group’s website also states, “WE BELIEVE the Founding Fathers created this nation based upon Judeo-Christian values and that our culture flourishes when we uphold them.”

The New York Times also reported in February 2022 that Ginni Thomas “founded a group called Groundswell with the support of Stephen K. Bannon, the hard-line nationalist and former Trump adviser. It holds a weekly meeting of influential conservatives, many of whom work directly on issues that have come before the court.” According to the Intercept, the organization is “touted as a plan to wage a ’30-front war’ on left-wing activists and the GOP establishment.”

4. Ginni Thomas Launched Her Own Conservative Advocacy Group & Served as a Delegate at the 2016 Republican National Convention 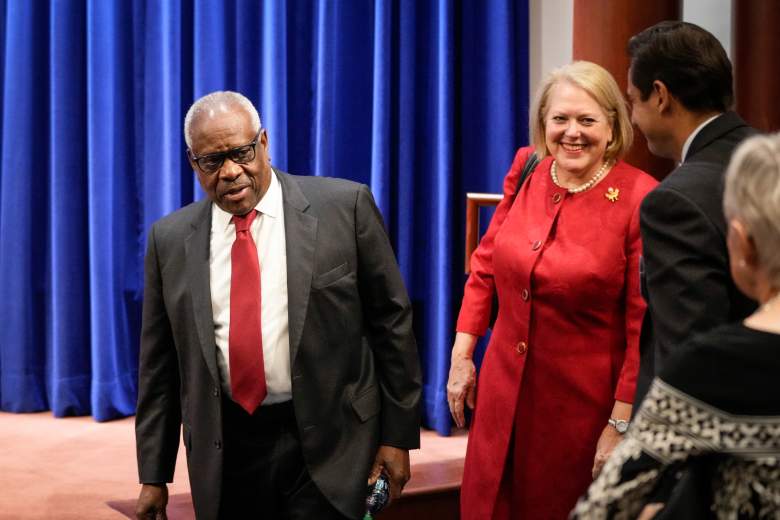 Ginni Thomas has been working in Republican politics since the 1980s. After graduating from law school, she returned to Washington, D.C. to briefly work for Rep. Daub, the Baltimore Sun reported. She started working as a labor attorney in the Chamber of Commerce in 1985, the newspaper added.

She launched her own conservative advocacy group called Liberty Central in 2009, according to Open Secrets, a database that tracks money in politics. Under the “board members” tab, Ginni Thomas is listed as the president and CEO.

The group merged with the Patrick Henry Center for Individual Liberty in 2010, the Daily Caller reported at the time. The article described Liberty Central as being affiliated with the Tea Party.

Ginni Thomas became a contributor for the Daily Caller in 2011, according to her personal website and her bio on the Daily Caller. Fox News host Tucker Carlson launched the website in 2010.

However, it’s unclear how long she was associated with the website as her bio is out of date. Her age is listed as 54 on her bio and as of this writing, Ginni Thomas is 65. Her bio describes her as a “special correspondent for the Daily Caller producing videos of emerging leaders and educators in the public square. Her ear is to the ground outside the Washington Beltway as a social entrepreneur.”

In 2016, Ginni Thomas served as a delegate from Virginia at the Republican National Convention, according to her personal website.

5. Ginni Thomas Asked Anita Hill to Apologize to Her Husband 2 Decades After the Hearings 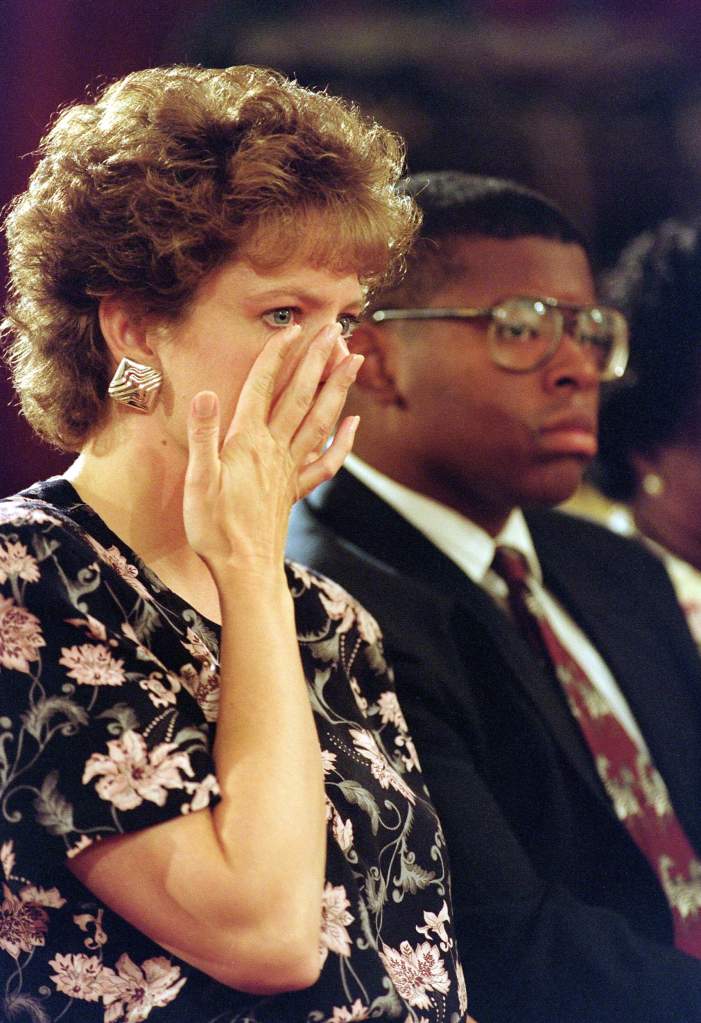 GettyVirginia Thomas, wife of US Supreme Court nominee Clarence Thomas, wipes away tears as she listens to Judge Thomas’s opening statement, September 10, 1991, during confirmation hearings before the US Senate Judiciary Committee.

Ginni Thomas met Clarence Thomas in 1985, when he was the chairman of the Equal Employment Opportunity Commission, the Baltimore Sun reported. They tied the knot two years later at St. Paul’s United Methodist Church in Omaha.

The couple did not have children of their own but Ginni Thomas became a stepmother. Justice Thomas had one son, Jamal Thomas, from his first marriage. In 1991, Jamal Thomas was 19 and living with his father and stepmother, according to the Baltimore Sun.

Clarence Thomas was confirmed to the Supreme Court in October 1991 despite a controversial confirmation hearing. Former aide Anita Hill accused him of sexual harassment and famously testified during the hearing, as summarized on History.com. Thomas denied the allegations.

Ginni Thomas supported her husband. Nearly 20 years later, she made headlines when she called Anita Hill to ask her to apologize to Justice Thomas. The New York Times reported in 2010 that Ginni Thomas left a voicemail for Hill. Hill played the recording for the newspaper:

Good morning Anita Hill, it’s Ginni Thomas. I just wanted to reach across the airwaves and the years and ask you to consider something. I would love you to consider an apology sometime and some full explanation of why you did what you did with my husband. So give it some thought. And certainly, pray about this and hope that one day you will help us understand why you did what you did. O.K., have a good day.

Ginni Thomas confirmed leaving the messages for Hill and told the Times she meant it as an “olive branch.” There was no explanation as to why she reached out so many years after the fact.