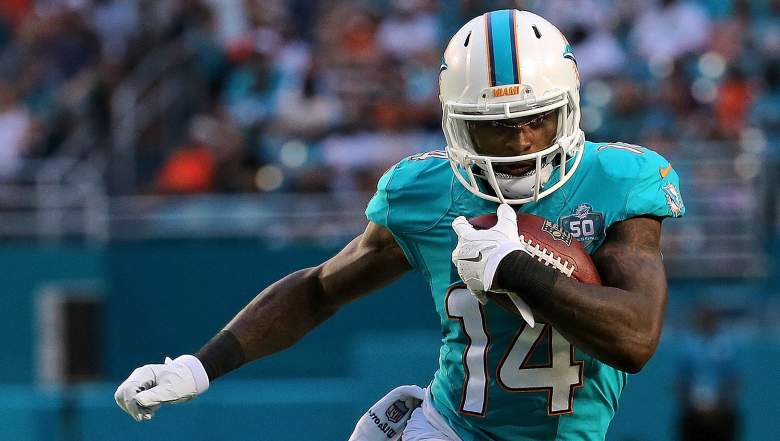 Miami receiver Jarvis Landry is someone you want in your lineup in Week 1. (Getty)

With the offenses of the NFL putting on full-blown aerial assaults each week, wide receivers are becoming much more valuable in fantasy football.

More than 2 handfuls of teams have 3 wide receivers, who are legitimate fantasy contributors, on their team. It’s by far the deepest position in fantasy football.

There are probably 20-25 receivers in the league that are must-starts each week. So you’re not going to see their name in this post unless they’ve been relegated to “sit” status … it will happen.

So which receivers should you be starting and sitting this week? Keep reading to find out.

And then bookmark our fantasy football rankings 2015 page to keep up-to-date on the latest projections and rankings for each NFL week throughout the season. 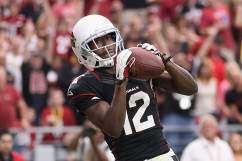 Landry is no longer a secret as he’s on everybody’s radar. And despite all of the new weapons in Ryan Tannehill’s arsenal, Landry is still his go-to. Landry isn’t a deep threat, but he doesn’t need to be to pile up receptions and yards. And it doesn’t hurt the Redskins are a notch better than atrocious in the secondary.

The more I see this matchup the more I like it. A) Michael Floyd (broken fingers) may or may not play, B) Larry Fitzgerald is really slowing down and is entering “possession receiver” status, C) Carson Palmer is healthy and will need to throw it in this game, and D) the Saints will be without starting defensive backs Keenan Lewis and Jarius Byrd. Commence chop-licking.

Randle has not exactly lived up to the lofty expectations, but ended 2014 on a tear. With Victor Cruz iffy (calf), Randle could see an uptick in targets vs. a very beatable Dallas secondary. There’s only 1 receiver worth doubling on the Giants and it’s Odell Beckham. Randle will see single coverage in what is expected to be a shootout.

Bonus: Eddie Royal is a little banged up (hip), but will be on the field when the Packers crush the Bears Sunday. Jay Cutler is going to throw it a lot in hopes of keeping Chicago in this game. Royal is probably the fourth option in the passing game (Alshon Jeffery, Matt Forte, Martellus Bennett), but that could be a good thing as he’ll get less defensive attention. 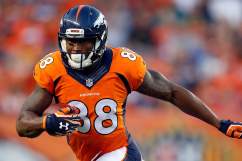 I’m not going anywhere near the 49ers’ passing game until I see some consistency from QB Colin Kaepernick. Smith can beat anyone deep, and that’s why the Niners brought him in, but that’s it. He’s a one-trick pony. Kaep has never had a deep threat like Smith before, but I think teammate Anquan Boldin has a better game in Week 1.

On the opposite of the field from Smith will be Wallace, another home run threat. Teddy Bridgewater has improved his deep ball, but not enough to make me throw Wallace into my lineup just yet. This is a wait-and-see situation. That’s the problem with these downfield threats, they’re so unpredictable and hit-or-miss, especially with a young QB.

Johnson has lost a step or 6, but at 34 still has the chance to be a productive fantasy receiver, especially now with Andrew Luck throwing him passes. But this matchup against the Bills isn’t very enticing as they allowed a league-low 16 touchdown passes in 2014. And with Rex Ryan running the D now, you know he’ll try to make them even stouter. Johnson is nothing more than a No. 3 receiver for your fantasy squad this weekend.

Read More
Fantasy Football, Fantasy Football Rankings, Football, NFL
The NFL is a pass-happy league, but that doesn't mean everybody is worth starting on your fantasy football roster. What receivers should you play?