Kimbo Slice, real name Kevin Ferguson, has passed away at 42 years old. Ferguson’s cause of death was heart failure, according to his training partner, Tyler Cook.

An official cause of death for Ferguson has not yet been made public. It is not clear if an autopsy will be performed.

The fighter, who made his name in the Florida street-fighting circuit, was hospitalized earlier Monday with an undisclosed condition.

Coral Springs Police Sergeant Carla Kmiotek told CNN that there was no police or EMS call to Ferguson’s Florida home before he was hospitalized. Police are not investigating and no foul play is suspected, she said.

Ferguson’s last professional fight was in February, when he headlined a Bellator event fighting against Dhaffir “Dada 5000” Harris. In a match that caused Dada to suffer renal failure, Ferguson defeated his opponent by knockout in the third round. The Texas athletic commission later changed the result, after it was discovered Ferguson tested positive for anabolic steroids and elevated testosterone levels.

He tested positive for nandrolone, according to MMA Fighting. Nandrolone use can cause heart issues, according to Ergo Log, which cites research by the University of L’Aquila in Italy:

Weight-cutting and steroid use, two things UFC is working to avoid, take their toll on fighters. Slice struggled with weight throughout his professional career, after working as a street fighter with no restrictions.

Weight-cutting is a common problem in fighting sports, and sometimes it can have serious consequences. In December, Chinese fighter Yang Jiang Bing died from a heart attack suffered while trying to cut weight.

Kimbo Slice fought at heavyweight, weighing in at 232 pounds during his last fight. The heavyweight limit is 265 pounds.

Steroid use also has long-term affects on heart health. Research has shown that long-term anabolic steroid use weakens the heart’s left ventricle, the muscle primarily responsible for pumping blood throughout the body.

Making his name in street fights, Ferguson endured damage that would normally be treated by medical professionals in mainstream fights. The documentary “Dawg Fight,” which examined Ferguson’s background in the underground, is a must-watch for those curious about the Florida fight scene.

Slice was scheduled to fight next in July, at Bellator 158 in London. His final MMA record was 5-2, with his last win coming in June 2015 over Ken Shamrock.

Despite making his name as a hard-nosed fighter, Ferguson lived as a devoted family man. He leaves behind six children, including his autistic son who joined him in the gym for his fight with Shamrock. 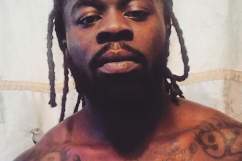