MMA fighter Kimbo Slice has died at the age of 42, his camp, American Top Team, said on Twitter.

He was hospitalized in South Florida in dire condition Monday night, TMZ reported.

Kimbo Slice, real name Kevin Ferguson, is survived by his wife and six children, including Kevin Ferguson Jr., who has followed his father into mixed martial arts, fighting under the nickname “Baby Slice.”

Here’s what you need to know about “Baby Slice”:

1. He Won His First MMA Fight in March With a Knockout

Kevin “Baby Slice” Ferguson Jr. made his MMA debut in March 2016, winning in the first round by knockout against 2-0 Tom Brink. You can watch video of the match above.

The fight took place on March 12 at the Hu Ke Lau Showroom in Chicopee, Massachusetts.

“Brink and Baby Slice squared up quick in the cage as everyone in attendance had all eyes on how Ferguson Jr. would perform. Baby Slice didn’t waste time as he stalked down Brink, constantly closing distance, and throwing heavy leather with bad intentions. It only took Ferguson Jr. less than 2 minutes to secure a debut win by way of a solid KO at 1:23 of round 1,” the MMA organization said in its recap of the fight. 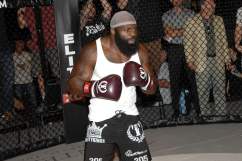 Kimbo Slice Cause of Death: How Did the Fighter Die?

2. He Lives & Trains in Connecticut

Ferguson lives and trains in Connecticut, according to his Facebook page.

He trains at Plus One Defense Systems in West Hartford. 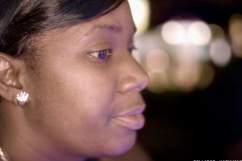 3. He Studied Photography in College in San Francisco

Ferguson said his father pushed him to go to college and not have his first option be MMA fighting.

“No, no, he didn’t want me to do it,” Ferguson Jr. he told MMA Fighting. “He wanted me to go to school. That’s why I went to college. He told me to experience college first, and then if I’m not liking it or feeling it, then fine. But he said to never have MMA as my first option, school first.”

He studied photography at the Academy of Arts in San Francisco.

4. He Says He Now Understands the Sacrifices His Father Made During His MMA Career

After turning to MMA fighting, Ferguson Jr. said he has learned to appreciate the work his father did when he was growing up.

“I didn’t understand it as a kid,” he told MMA Fighting.” I was always quiet, just soaking it in. But when I think back and look back on everything, I understand it more. I see the hard work [my father] put in. The dedication, and all the sacrifices he made. I’ve got to make the same sacrifices.”

Kimbo Slice during a fight. (Getty)

Kevin Ferguson II was a highly touted high school running back at Booker T. Washington High School in Miami, according to the Orlando Sentinel.

Kevlar Ferguson has Autism, and has trained with his father, according to the Sporting News.