Lionel Messi scored the game-winning goal in stoppage time to lead Barcelona past Real Madrid in El Clasico by a final score of 3-2.

The goal was Messi’s second of the game and his 500th with Barcelona. The game winner came in the 92nd minute as Barcelona made one final rush at the net. Messi took a pass from Jordi Alba in the center of the box and drilled a goal past Real Madrid goalkeeper Navas into the bottom left corner of the net.

You can watch the goal below:

Hay Liga!#Messi racks up his 500th career goal. Oh, and it just so happens to settle the best #ElClasico in a long time! pic.twitter.com/ZvF5mxrCG0

Messi was bloodied earlier in the match, which appeared to be headed toward a draw after a late equalizer by James Rodriguez for Real Madrid in the 86th minute:

The first goal of the game was scored by Madrid’s Casemiro in the 28th minute. Messi drew Barcelona back even with a 33rd minute goal, and Ivan Rakitic put Barcelona on top in the 2-1 in the 73rd minute. 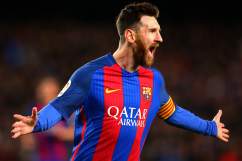