The New York Giants have a crowded group of pass-catchers in 2017, complete with Odell Beckham Jr., Brandon Marshall, rookie Evan Engram and second-year pro Sterling Shepard. With a ton of options in the passing game, deciding when to select these players in fantasy football can be a tough call, but no one player will be tougher to gauge in terms of their value than Shepard.

The former Oklahoma wideout was a second-round draft pick last season by the Giants and wound up hauling in 65 passes for 683 yards and eight touchdowns in his rookie season. While he only topped the 100-yard receiving mark once last season, he did have 13 games with at least three receptions and 10 with at least four receptions.

But, the addition of both Marshall and Engram is almost certainly going to hurt his fantasy football stock. So the question is, will it wind up hurting his production as well, or could you get a steal in Shepard late in your draft? Let’s check out when fantasy owners should be looking to draft the 23-year-old wideout.

When to Draft Sterling Shepard

When you get down to the 12th round, you’re looking at players who don’t have a ton of upside in many situations. For Shepard, at least you’re getting a player who’s very, very talented and will be a part of a pass-happy offense. Shepard is going around the same time as Washington Redskins wideout Josh Doctson, who interesting is in a similar situation as a third option in the passing game, but on a team who airs it out a lot.

Shepard may not have an incredible ceiling this season, but when you get into the 12th round of your fantasy draft, you’re basically looking for a bye-week filler or a player who could be utilized in a great matchup. He’s both of those things and may wind up being a bit surprising this season as well.

Don’t shy away from Shepard this late in your fantasy football draft due to the other weapons. But then again, if someone wants to jump the gun and draft him too early, then let them do so.

Statistical Predictions for Shepard in 2017

It’s hard to really predict what Shepard is going to do this coming season with so many weapons in the Giants offense. To start, Marshall may be 33 years old, but he’s shown that he can still produce, as he caught 109 passes back in 2015 with the New York Jets. I don’t expect to see Marshall haul in anything close to that, and with Eli Manning being pretty consistent in his completions over the past three seasons, we can make a pretty solid educated guess on Shephard’s catches.

Let’s give Shepard 53 receptions for 550 yards and six touchdowns. That would almost certainly make him worth a 12th round draft pick as well. 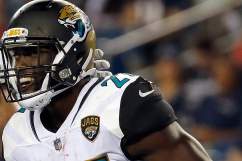 Leonard Fournette Fantasy Football 2017: When to Draft the Jaguars RB