Twitter Stephen Curry vowed to pass up a visit to the White House and President Donald Trump in favor of "making a statement."

Stephen Curry said he hopes to “make a statement” by declining to visit the White House and President Donald Trump following the Warriors’ NBA Championship.

“The things that he (Trump has) said and the things he hasn’t said at the right times, we won’t stand for,” Curry said during a Friday press conference. “By acting or not going, hopefully that will inspire some change when it comes to what we tolerate in this country and what’s accepted and what we turn a blind eye to.”

Curry cited an incident involved Seattle Seahawks’ Michael Bennett and Las Vegas Metropolitan police and other examples of racism as giving him a desire to stand up and make a change.

Watch the video of Curry’s thoughts on Trump and visiting the White House below:

It’s been a longstanding tradition for champion professional sports franchises to pay visit to the White House.

“We will meet as a team to discuss it and make a decision,” Kerr told Shelburne.

Shelburn wrote that the White House would invite the Warriors if they made the group decision to come, but several players have remained critical of Trump in recent months.

“I don’t agree with what he agrees with, so my voice is going to be heard by not doing that,” he said to ESPN’s Chris Haynes in August. “That’s just me personally, but if I know my guys well enough, they’ll all agree with me.”

Before Friday’s press conference, Curry told reporters he’d side with Durant and vote no to making the trek to D.C. 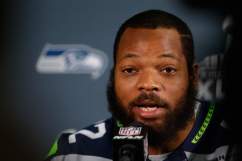