Getty Josh Rosen will look to escape the Aggies defense in the UCLA opener.

Texas A&M squares off with UCLA in a college football Sunday night special. According to OddsShark, UCLA is favored by 3.5 points, and the over-under is set at 58 points.

Both teams are projected to do well based on SB Nation’s Bill Connelly’s S&P+ projections. Texas A&M is ranked 22nd while UCLA is ranked 32nd.

There are reasons the metrics favor Texas A&M. The Aggies offense starts with Trayveon Williams and Christian Kirk. Williams is a speedy running back who is coming off a phenomenal freshman season. Kirk is a dynamic receiver who does most of his damage from the slot.

Nick Starkel is expected to get the start at quarterback for the Aggies. While Starkel offers an unknown under center, he has plenty of weapons around him.

For UCLA, all things start with quarterback Josh Rosen, who missed the end of last season with an injury. Rosen is a top NFL prospect, but has been inconsistent during his time at UCLA. He has all the talent needed for a bounce back season. Part of the challenge for Rosen is he has not had the kind of weapons some of the other top quarterbacks have.

For today’s game, Texas A&M has too many pieces for UCLA to slow them down. Look for the Aggies to pull off an early road wins just like the computer suggest. 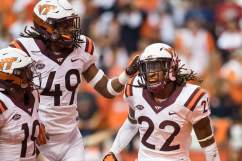