West Virginia takes on Virginia Tech in a renewed rivalry. According to OddsShark, Virginia Tech is favored by five points and the over-under is set at 52 points.

Last season, the Hokies had a solid track record against the spread. Virginia Tech went 8-6 while West Virginia was 5-8. Both teams will debut new quarterbacks on Sunday night.

Former Florida quarterback Will Grier will make his West Virginia debut after transferring. Grier looked like a promising quarterback in Gainesville before getting suspended. It will be interesting to see how Grier can do in the open West Virginia offense.

According to 247 Sports, Jackson was a three-star dual-threat quarterback. Hokies coach Justin Fuente explained to Hokies Sports (via Gobbler Country) how Jackson secured the starting spot.

He’s continued to improve in terms of his ability to deliver the ball on time. He’s got a pretty good understanding of what we’re trying to get accomplished, [and] like I said, a great demeanor. There’s competitive spirit there—not that there’s not with the other ones, but the word that comes to my mind is, day in and day out, he’s been the most consistent in terms of the things that we talked about, the kind of three criteria that we talked about before this camp started that we were looking for—taking care of the ball, expected outcomes and then how we feel. In those three categories, we feel the best about Josh.

Given the emotions are high in this renewal of a rivalry, fans can expect a low scoring game early on. The addition of Grier keeps West Virginia in the game, but expect Virginia Tech to narrowly pull out the victory. 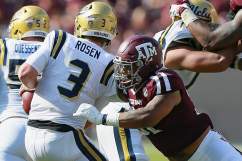