Week 6 is not even halfway over, and we already have a massive shakeup in the college football landscape. Iowa State defeated Oklahoma 38-31 on the road as the Sooners’ College Football Playoff chances took a hit. According to OddsShark, Oklahoma was favored by 31 points heading into the matchup, yet the Sooners only scored 31 points.

What makes the win even more remarkable is the Cyclones defeated Heisman Trophy candidate Baker Mayfield with a two-quarterback system. Joel Lanning was taking snaps at both quarterback and linebacker in a move reminiscent of 1950’s football.

Walk-on Kyle Kempt played the majority of the game as quarterback. Kempt finished the game with 343 passing yards and three touchdowns including the game-winning touchdown pass. Mayfield threw for 306 yards and two touchdowns.

Did we mention Iowa State trolled Mayfield by planting the Cyclones flag in the middle of the Oklahoma logo? Yes, college football is great.

Iowa State had been unsuccessful at pulling off upsets against lesser opponents earlier this season. Last week, they lost at home 17-7 to Texas. In Week 2, the Cyclones lost 44-41 to Iowa. Iowa State was victorious over Northern Iowa and Akron.

The loss moved Oklahoma down to No. 9 in Heavy’s latest college football power rankings. It was a classic letdown spot for Oklahoma who faces rival Texas next week.

Oklahoma is not eliminated from title contention, but they have made the path much harder on themselves. The Sooners still have games against TCU, West Virginia and Oklahoma State remaining on their schedule. Now the real work begins for first-year head coach Lincoln Riley.

During the first month of the season, Riley made the transition appear seamless as Oklahoma looked like one of the best teams in the country. The Sooners crushed Ohio State in Columbus. As this week proved, it only takes one week where taking the foot of the gas can really cost you. 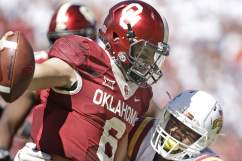