American figure skating phenom Nathan Chen was a contender for the gold at the 2018 Winter Olympics (although he had a disastrous performance at the opening of the games), but does he have a girlfriend?

Nathan Chen was dating fellow figure skater Amber Glenn as recently as 2017. In fact, they were quite open about their feelings for each other on Twitter. Whether they are still together is not entirely clear, which would disappoint fans who became invested in the budding romance between two young ice skating sweethearts.

Of course, Nathan Chen has a lot else that he needs to focus on with his individual program coming up in Pyeongchang after the poor showing in the team’s short program.

1. Chen Told a Fan He Loved Amber Glenn ‘A Lot’

Nathan Chen was openly dating Amber Glenn a year before the Olympics. Glenn, who is from Dallas, Texas, is a U.S. Junior Ladies National figure skating champion.

He admitted as much on the question site Askfm. He was asked by a fan a year before he competed in South Korea, “Are you and Amber dating? I just couldn’t help wondering cause I have this weird addiction to read all the comments on every single Instagram post…..And I saw some really cute comments! ❤ Please answer ASAP!!!!! Sincerely, Your #1 fan! ?”

Nathan responded: “Yes we’re dating! I love her a lot:)” 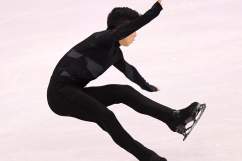 2. The Pair Has Gone Quiet on Social Media Lately & Amber Retweeted Posts About Other Men’s Skaters

The pair were also open about their relationship on social media. Amber Glenn’s recent posts don’t mention Nathan Chen, though, and his social media pages have been quiet on her, too, more recently, so it’s not clear whether they are still together.

Some eagle-eyed fans noticed that the pair’s social media pages had stopped mentioning each other, with one wondering on a thread, “Has Nathan dumped Amber Glenn? She usually retweets and comments everything about him on social media. This time she ignored him all week including Valentine’s Day.”

Indeed, Amber Glenn retweeted posts during the men’s team short program and also about men figure skaters in Pyeongchang – but about other men’s skaters, not Nathan Chen.

He has a career in the movie business if he want pic.twitter.com/1uANfRg7Jh

Remember, they are very young. Both Nathan Chen and Amber Glenn are only 18-years-old, so it’s unlikely they would have become engaged soon anyway.

3. Fans Were Invested in the Nathan Chen/Amber Glenn Romance

GettyNathan Chen competes in the Men’s Short Program during the 2018 Prudential U.S. Figure Skating Championships at the SAP Center.

People loved the idea of Nathan Chen and Amber Glenn as boyfriend and girlfriend, though. They were definitely an item recently. In July 2016, Ice Network reported they were boyfriend and girlfriend. “Glenn did attend the 2016 U.S. Figure Skating Championships, and she went to the world championships as a spectator, too. A lot of U.S. skaters who weren’t competing came to watch, and Glenn and her boyfriend, Nathan Chen, enjoyed getting to hang out with everyone in the stands,” that article said.

Fans swooned at the idea of the two American figure skaters together.

nathan chen and amber glenn are so cute awwwwwwww

Amber Glenn and Nathan Chen are such a skating power couple, slay my little angels

However, the chatter has died down more recently. Oh, and, no, Nathan Chen is not related to Karen Chen, the female figure skater who is also competing in South Korea. 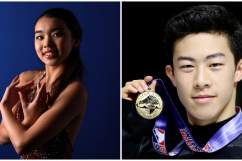 Nathan Chen & Karen Chen: No, They Are Not Related

4. The Pair Was Loved Up on Twitter Just Over a Year Ago

A little late but thank you @nathanwchen for making my Valentine's Day special❤??️ pic.twitter.com/2y8WNH1lBG

In February 2016, the pair was pretty loved up and very public about it all. “@nathanwchen love and miss you too?,” Amber Glenn wrote on Twitter.

“@AmberGlenn_ aw I love you more than anything❤️ I miss you,” Nathan wrote. The thread started with Amber posting a photo of her with flowers and an “I love you” balloon. “A little late but thank you @nathanwchen for making my Valentine’s Day special❤??,” she wrote.

Just how good of a figure skater is Nathan Chen? Exemplary, generally, however he had a dismal first performance at the Winter Olympics, even falling on the ice.

A disastrously bad performance for Nathan Chen. No clean jump, one fall, a doubled quad toe

According to The Atlantic, “The 18-year-old American is already seen as the greatest athlete in the sport’s history—and he’s competing at his first Olympics in an especially talented field.” According to the Atlantic, he first started getting attention on the ice at the incredibly young age of 10. Nathan Chen, who is from Utah, won the U.S. Novice Championship at that age, which was its youngest winner ever.

5. Amber Glenn Has Gone Through Health Issues in Recent Years

As for Glenn, she has faced more challenges on and off the ice. “After winning her junior title in 2014 and then making her senior debut the following season, she withdrew from the 2016 U.S. Championships due to some health issues and was off the ice for an extended period of time. She eventually resumed training, but at a new training location with Peter and Darlene Cain as her new coaches,” reported FigureSkaters.com.

amber glenn
– LISTEN
– i have heard the best stories shes so kind
– heart of gold
– so cute!!
– love watching her skate its so pretty i lov her style
– beautiful jumps!
– literally lov everything abt her programs
watch her! – https://t.co/kNJcDfgkVT
pics – https://t.co/TrzqEGWsgt pic.twitter.com/4TEFyGX5pR

On a GoFundMe page, Amber, the daughter of a police officer, wrote candidly about her health problems. “My Name is Amber Elaine Glenn I’ve been figure skating since I was 5 years old and it’s practically been my life ever since. I’ve had some great ups in my figure skating career competing in 6x national championships, winning junior ladies then going on to compete and place top 8 at junior worlds as well as medaling internationally, But Unfortunitly last season I had many set backs physically as well as both on and off the ice that caused me to be in the hospital and have to end my season early. I ended up taking over 7 months off from the sport,” she wrote, asking for help funding that season’s skating expenses.

Glenn has recently tweeted a lot of inspirational messages about mental health issues.