Nathan Chen, the American skater many believed was headed to a gold medal in the 2018 Winter Olympics, fell on the ice during what announcers said was a “disastrous” performance and the worst they’d seen from the 18-year-old Utah phenom. You can watch a video of Chen talking about the fall below:

There is not much video out yet of the actual fall, but people watching it on television expressed shock.

Chen didn’t mince words. He wasn’t very happy with his performance, either. The fall came during the men’s short program during the team competition. Although this was not Chen’s primary focus going into the Olympic games, the fall could create more psychological pressure on him going into future performances.

“I was really excited. I felt pretty good… I’m really upset that I let the team down with that short program…but I still have two more big programs that I have to do, and so I will focus on that and do a better job,” Chen said after the program to NBC News. “I let myself down, and I let the team down. It’s not a representation of who I am, and what I can do. I need to work hard in the next couple days.”

According to The Daily Beast, the moment that Chen fell came during “what was supposed to be a quad toe (he only got two rotations), then wiping out on the ice during a triple axel.” He may have helped squander the U.S. team’s chances to bring home gold as a result of the poor performance, Daily Beast notes, although he will still be competing individually and has time to reconfigure his mindset. The U.S. team though ended the night (February 8, 2018) in only fourth place, a disappointing showing for a team expected to excel, largely through the boost of Nathan Chen’s talent.

Chen said he needed time to go over what went wrong. He’s been an athletic marvel on the ice since he was 10-years-old, and the youngest U.S. Novice Champion. He completed five quadruple jumps in competition, which made him “the first man in international skating history to land five quadruple jumps in one 4 1/2-minute program,” The Washington Post reports. All of that added up to a lot of anticipation about what he could accomplish in PyeongChang. Of course, Chen is very young; he is only 18.

Nathan Chen was probably the most hyped up and highly anticipated men’s figure skating talent going into the Olympic competition. Chen has fallen before. Here’s video of him falling on the triple axel during the World Figure Skating Championships:

Here’s an older video that highlights how good Nathan Chen can be when he is at the top of his game. This was the competition in which he landed the five quadruple jumps: 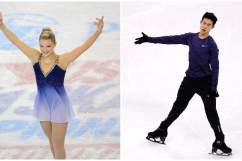