Ever since he entered the league, Los Angeles Dodgers pitcher Clayton Kershaw has been the surest spot on the roster. A majority of the time, fans can expect a stellar performance from the Cy Young-winning pitcher on the mound.

Now, Kershaw is leading the Dodgers in the battle against the Milwaukee Brewers as the Dodgers work to meet the Red Sox in the World Series next week.

Kershaw has been married to his longtime girlfriend, Ellen Melson, since 2010, and they have two children together. The couple have been together since their days at a Highland Park High School in Dallas.

Here’s what you need to know about Ellen:

1. Ellen and Clayton Have Been Together Since High School

According to an interview with Graham Bensinger, Ellen and Clayton began dating when she was 15 and he was 14 and both were freshmen. They both grew up in Dallas, and Clayton was in the hallway at the school when he first asked her out. The Kershaws attended school with Detroit Lions quarterback Matthew Stafford and fellow MLB pitchers Jordan Walden and Shawn Tolleson.

After graduating from college, the couple were forced to separate. Ellen attended the Texas A&M while Clayton was drafted by the Dodgers and bypassed his collegiate career.

“I would say we got closer when she went to college and I stared playing professionally,” Clayton told Risen Magazine. “We both kind of figured out stuff on our own. I think that really helped our relationship now. As for when she became the one? I really don’t know. I guess somewhere late in high school, or early college.”

Ellen had many of the same thoughts during the interview, saying they realized they were the ones for each other when they were apart.

“We both realized our lives were so much better when we were together than when we were apart,” she told Risen Magazine. “We could accomplish so much more; with my passion for Africa and Clayton heading into his career in baseball, it felt like the Lord was up to something pretty cool with both of our passions.”

Leading up to their engagement, Clayton planned a “day of fun” to pop the question. It happened when he was 21, according to the interview with Bensinger.

That day started with a trip to a Six Flags amusement park on a chilly day while Ellen was on winter break from school at Texas A&M. After the Six Flags date, they arrived to dinner in a limo before heading to Clayton’s holiday-clad townhouse, which is where he proposed.

Clayton said Ellen had no idea that a proposal was coming, and thought it was just the end of an elaborate date. Instead, they were about to start the rest of their lives together.

2. The Kershaws Got Married in December 2010

The Kershaws got married on December 4, 2010 in a Dodger-themed wedding in Dallas, according to the Abilene Reporter-News.

A sign saying “Welcome to Dodgertown” was prominently displayed at the reception and that the groom danced in Dodger blue sneakers.

The ceremony was held at Highland Park Presbyterian Church and the wedding was at nearby Royal Oaks Country Club.

Photos from the event can be seen here or here.

3. They Had Their First Child the Day Before Clayton Won His 3rd Cy Young Award

10 years ago – I was bursting with pride during your MLB debut. Still get butterflies every time you step onto that mound. Love being by your side @ClaytonKersh22 watching your dream come true. pic.twitter.com/r8G6sPSQRC

Ellen and Clayton welcomed their first child, daughter Cali Ann, on January 23, 2015. It was the day before Clayton was due in New York City to accept his third Cy Young Award. Just before Cali Ann was born, the couple purchased a home near Dodger Stadium, according to Yahoo. Clayton and Ellen said they have a specific set of rules to go with their house — from animals to card games.

We agree on several things that we want to incorporate into our new family. Sunday night dinners are always important, and our home will feature a revolving door of people coming and going. Dogs are to be treated like humans, and card games are to be taken very seriously.

The couple also welcomed their second child, Charley last year. Ellen was 9-months pregnant while the Dodgers played the Chicago Cubs in the 2016 NLCS.

In 2017, their daughter Cali threw out the first pitch of a Dodgers game to her father while her brother sat on the mound near her. The next night, the couple hosted a fundraiser at the stadium for their charity.

4. They Use Clayton’s Success to Help Children Via Their Organization, ‘Kershaws Challenge’

Oh what a night! Sharing some photos from the 6th Annual #pingpong4purpose. Check them out here: https://t.co/zomOnzrV1x. pic.twitter.com/AuCoDuynu5

Working with underprivileged children in Africa has always been a passion of Ellens. So, it didn’t take long for the couple to start their own charity to give back

Kershaw’s Challenge started in 2011 with a girl named Hope. She helped the couple realize that they have “a platform to do great things,” the organization’s story said.

Hope, who the Kershaws met when she was 9-years old, was born in Zambia and has battled the HIV epidemic her entire life. She was sick and malnourished and survived mostly on the streets. Ellen was the first one to meet Hope as she was there working, and Clayton flew to Zambia in December 2010 to meet her. According to the organization, Clayton was “in disbelief at the depth of poverty.”

“As a result of a lifetime of abuse, she built up walls towards anyone who might hurt her,” the story said.

As Hope and the Kershaws grew their relationship, she started to open up and they sponsored her through a ministry organization to provide her foot and an education.

Because Hope’s story is similar to many children in Africa, the couple came up with a vision. It included donating to the organization for every strikeout he records during a game. Kershaw’s Challenge has grown extraordinarily since its inception and now works in Los Angeles, Dallas, Zambia and the Dominican Republic.

Kershaw’s Challenge is committed to transforming the lives of children, in America, Africa and the Dominican Republic, through Jesus Christ. Our goal is to partner with organizations that are committed to this as well, and work alongside them on specific projects to make life better for children. 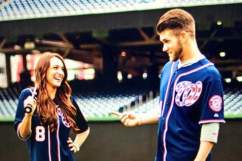 Clayton and Ellen co-authored a book titled Arise: Live Out Your Faith and Dreams on Whatever Field You Find Yourself. The book is about how they use their faith to help in their humanitarian efforts. It was released on January 2012 through Regal Press.

In 2017, when Clayton suffered a lower-back injury, Ellen was on a flight from Florida. She told The Los Angles Times that she was frantic when she saw he was pulled after the second inning and it killed her not knowing what happened right away.

“To not know what was going on and not be able to get a hold of him to know if he was sick or hurt or whatever was going on, there were definitely butterflies in my stomach,” she told the newspaper.

In addition to her philanthropy, Ellen described herself to The Times as the family’s “traveling secretary, real estate agent and accountant.”

“I feel like I had kind of gotten into the groove of that, and then you start adding kids to it and it’s a whole other ballgame,” she said.”