Dustin Johnson’s girlfriend, Paulina Gretzky, is at the PGA Championship to cheer on the golfer as he makes a final push at the major. Gretzky posted the photos below to her Instagram story at the start of the Bethpage tournament.

“Let’s go Dustin,” Gretzky posted from Bethpage just before the start of the tournament.

Gretzky has been a regular at Johnson’s PGA events after a rocky 2018 with rumors that the two had called it quits. Gretzky even made time to offer a bit of relationship advice to fans during an Instagram Q&A session. According to the New York Post, someone asked Gretzky for her “best relationship advice.”

During a Q&A with followers on her Instagram story on Wednesday, Gretzky, 30, answered one question about the best relationship advice she had received. Replying with a throwback photo, the mother of two shared, “Be with someone who loves you for you and never tries to change you.”

Gretzky added, “Also, be patient. Most men are a work in progress. ?”

It looks like Gretzky’s patience is paying off as the couple has patched things up. Gretzky and Johnson have two kids together: River and Tatum.

Paulina Surprised Fans With an Appearance at the 2018 Ryder Cup

Weeks after scrubbing her Instagram with photos of Johnson, Gretzky made a surprise appearance at the 2018 Ryder Cup. This was after months of rumors that the couple had broken up. Johnson seemed to confirm things were better when he posted a photo with Gretzky at a Kid Rock show last October.

“Thanks kid for an amazing show @paulinagretzky,” Johnson noted.

During the same question and answer session, Gretzky backed her boyfriend’s claim that he slipped down the stairs prior to the 2017 Masters. There was some skepticism that this is what happened prior to Johnson withdrawing, but Gretzky called these “entertaining lies,” per Golf Magic.

There have been a number of ‘rumours’ as to how and why DJ fell down the stairs at his rented Augusta apartment that week, but Paulina has now set the record straight having spent the last 24 months listening to what she calls “entertaining lies.”

“Like he [Dustin] said, slipping on the stairs,” Gretzky replied to a fan’s question on her Instagram Story.

“Tried to race outside to get our son from the car because it was storming out.

“But I’ve definitely enjoyed all the entertaining lies… I mean ‘rumours’.”

We will see if Gretzky can bring Johnson good luck at the final rounds of the PGA Championship. Johnson headed into the weekend as one of the golfers at the top of the leaderboard, but it remains to be seen whether he can catch his friend Brooks Koepka for the major title. 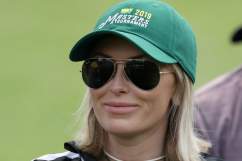