The Chicago Bears have had a rough season when it comes to injuries thus far. Perhaps the roughest patch they’ve had to wade through–losing starting defensive end Akiem Hicks to an elbow injury Week 5–is about to be over.

Per Chris Mortensen, the Bears have activated Hicks off the injured reserve list, and he will be good to go for the Bears’ huge Week 15 matchup against the Green Bay Packers Sunday.

As expected, the @Bears will activate DL Akiem Hicks from IR today, making @The_Dream99 ready to play vs @packers, per sources

Bears head coach Matt Nagy has been positive and upbeat all week about Hicks playing, and the Packers have said they’re preparing for Hicks to play, so his return is not much of a shock to anyone involved.

The Bears will also have star cornerback Prince Amukamara back from a hamstring injury after he missed the Bears’ last game against the Dallas Cowboys, which will be a boost for their secondary.

Wide receiver Javon Wims (knee) is questionable against the Packers, as is defensive end Roy Robertson-Harris (foot). Wide receiver Taylor Gabriel and tight end Ben Braunecker remain out and in the concussion protocol, linebacker Danny Trevathan remains sidelined with an elbow injury, and right tackle Bobbie Massie will also miss while dealing with an ankle injury.

UPDATE: The Bears revealed that they placed Braunecker on the injured reserve list:

#Bears roster moves:
We have activated DT Akiem Hicks from IR to the active roster and have placed TE Ben Braunecker on IR.

Return of Hicks Comes at Right Moment for Bears 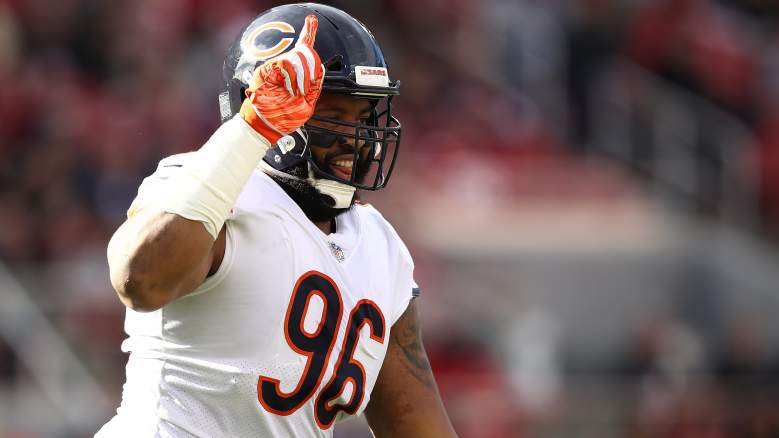 At 7-6, the Bears’ playoff hopes are minimal, but they’re there–and in order for their postseason hopes to keep on living, the team must keep winning. Beating the Packers in Lambeau in December is a tall task for anyone, much less a team that hasn’t done it much. But Hicks makes the Bears defense a great one, and his return will be huge. His presence alone should boost morale–and it should also boost an an already stout defense.

Hicks went on the injured reserve list October 15th, and while the Bears’ defense has managed to keep opponents to just 17.3 points per game, they have most certainly missed his presence on the defensive line. The Athletic’s Adam Jahns says that while the Bears are a top 10 defensive unit without Hicks, his presence alone makes them a top five defensive team:

The more I watch the film of the #Bears defense, the more it becomes clear just how much they miss Akiem Hicks. They’re still a top-10 unit but he makes them top-5.

The Bears will need to stop Packers running back Aaron Jones if they want a shot at winning this game, and with Hicks back in the lineup, their chances of doing that have greatly increased.

READ NEXT: Chicago Bears Rumors: Could LB Terrell Suggs Be a Good Fit For Bears?