Getty LeBron James of the Los Angeles Lakers posts up against Kyrie Irving of the Brooklyn Nets.

How are you handling the pandemic? How are you dealing with life with no sports?

There are many more important things than sports right now, though they have always served as a distraction to many and perhaps a distraction would be rather useful in times like this.

Only a handful of sporting events are proceeding as usual. Perhaps you cared for the Florida Derby, which took place this past weekend, or one of the few international soccer leagues which are carrying on. Maybe Ice Cube’s BIG3 league, which is scheduled to proceed in a quarantined environment, will quench your sports thirst, though we’ll have to wait until further into spring for that.

Media companies and those in sports businesses are asking themselves: what do we do now? The Action Network took a unique approach, creating their own event. The sports betting and data-centric media company, which was formed in 2017, created a simulated NBA one-v-one tournament. The 64-player King of the Hill event will be streamed via NBA 2K20 on the company’s Twitter feed. 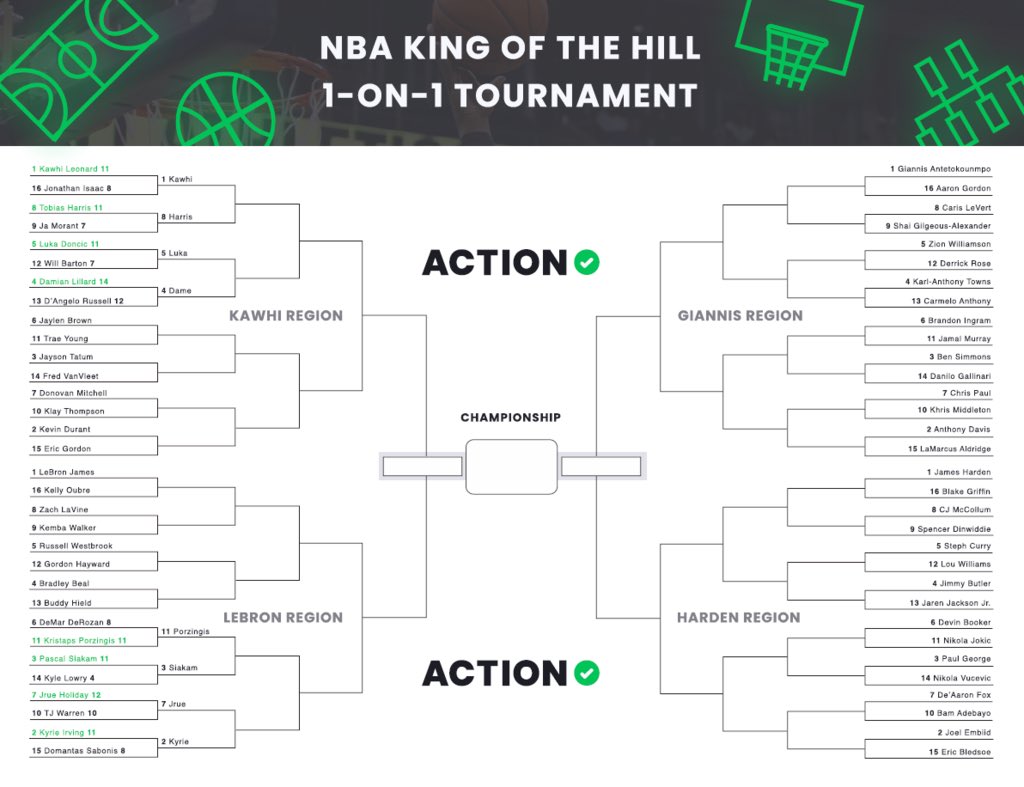 The concept is unique in that its a version of esports that we don’t have in the real world. Fans have long-yearned to see a 1-v-1 tournament and for one reason or another, it just hasn’t come to fruition.

Fans can at least see the simulated games, which are played to 11 points with a win-by-two rule in effect, while they wait for the NBA to return.

Underdogs Rise Up During Opening Weekend

Eight contests were decided in the opening weekend with Kristaps Porzingis being the lone player to record an upset. He overtook DeMar DeRozan in the 6/11 matchup of the LeBron region winning the game by a score of 11-to-8.

Kyrie Irving (who was a 4.5-point favorite) took down Domantas Sabonis, though he didn’t cover. Underdogs are 5-1 against the spread so far (excluding the pair of Pick’ems). Pascal Siakam, who took down Kyle Lowry by a score of 11-4 in the 3/14 matchup, was the only favorite to take care of business.

Tobias Harris handled a contest against Ja Morant and Jrue Holiday beat out T.J. Warren on consecutive nights. Both matchups were Pick’ems.

Kawhi Leonard, who beat Jonathan Issac in the opening game of the event, entered the tournament as a slight favorite to win it all. Though at +350, those are steeps odds for a player who will likely have to face Kevin Durant and the winner of the Luka Doncic-Damian Lillard match among other opponents.

LeBron James’ chances at a Final Four (-150) seem like the best bet. Yes, he’ll have to declaw Kyrie on his way to a Final Four. Potential opponents like Bradley Beal and Pascal Siakam are nothing to scoff at and let’s not rule out Russell Westbrook in any sort of competition fictitious or not. Still, LBJ should among the four remaining.

One player not to overlook: Ben Simmons. The former No. 1 overall pick (+8500) has a game that is built for 1-v-1. No, he doesn’t have a jump shot but if a defender backs off of him, he will just drive right at him; the more space, the faster head start Simmons gets. However, the schedule makers did him no favors, assigning him a three seed in the same bracket as Anthony Davis and Giannis Antetokounmpo.

More on the NBA: