Getty Todd Gurley has been linked to the Seattle Seahawks after his release.

The Rams released Todd Gurley after making it known that the running back was on the trade market. The Seahawks are believed to hold a high opinion on the star running back as Gurley was the Seahawks’ No. 1 ranked player on their board in the 2015 NFL draft, per The Seattle Times Bob Condotta.

“Cut? He was the top player on Seattle’s draft board in 2015,” Condotta noted on Twitter.

Assuming Gurley clears waivers, the Seahawks would be free to sign the running back along with all the other NFL teams. This is a much different scenario for the Seahawks to explore. Don’t be surprised if the Seahawks kick the tires on what his asking price will be, but the team could find it challenging to get a full picture of his health with the current NFL travel restrictions as a response to COVID-19.

Gurley was set to be a $13 million cap hit next season thanks to a $5.5 million salary along with a $7.5 million roster bonus, per Spotrac. The Seahawks’ chances of landing Gurley increased with his release, but it remains to be seen if Seattle is still interested in the running back given the concerns around his health.

Some Seahawks fans may be curious about the idea of Seattle having an interest in Gurley. It is important to note that, at this point, it is purely speculation and the team’s opinion could have changed since the 2015 NFL draft when the running back was their top-rated player. The Seahawks do have Chris Carson and Rashaad Penny on the roster, but both players are coming off significant injuries.

Based on the Seahawks’ comments at the NFL Combine, Penny could start the season on the PUP list. The Seahawks do not want to be in a position where they are signing running backs off the street during the season as they did in 2019. Carson is also entering the final year of his current contract.

The Seahawks have prioritized running backs more than most teams around the NFL. Pete Carroll continues to want the run game to be the focal point of the offense and having a player like Gurley to build around is intriguing.

It is a complicated time for Gurley to be signed given the skepticism surrounding his health. Due to COVID-19, players are not able to travel for physicals but are able to go to a mutually agreed upon doctor near them. Given Gurley’s contract, the Rams found it difficult to locate a team willing to trade for the running back without the ability to have their own doctors examine the rusher.

“Steve Wyche saying on NFL Network he thinks Gurley and Seattle could be a good fit. As noted earlier, he was top player on Seattle’s draft board in 2015,” Condotta tweeted.

The Rams Were Shopping Gurley

Many saw the writing on the wall after the Rams began decreasing Gurley’s workload and used a high draft pick on Darrell Henderson Jr. There have also been questions about Gurley’s knee and long-term health.

“Another big-name player whose name is coming up in trade talks: Rams RB Todd Gurley. As I reported in December, the team may be ready to move on,” Silver noted on Twitter.

Sports Illustrated’s Corbin Smith also expects the Seahawks to see if Gurley is a potential fit in the backfield.

“Everybody laughing about it – I fully expect John Schneider and Pete Carroll to call Todd Gurley’s agent. They’ve loved him since he was at Georgia. He’s not going to command that much money right now. Market is lukewarm for vet running backs. They’re looking for insurance,” Smith explained on Twitter.

A few things that made it challenging for the Seahawks to acquire Gurley from the Rams. The obvious reason is that the Seahawks are within the division, and the Rams likely preferred to trade him outside the NFC West. The bigger issue is the Seahawks were unlikely to take on Gurley’s salary like most NFL teams. This is especially true with solid running backs still available on the free-agent market like Melvin Gordon or Devonta Freeman. 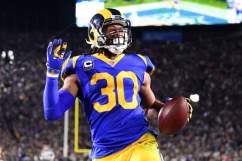