Back in February, when Celtics forward Jayson Tatum was on the hottest string of his young NBA career, he visited L.A. for a national TV game against the Lakers at the Staples Center. He put forth a memorable performance, tying a career-high with 41 points, making 12 of his 20 shot attempts, and going 13-for-15 from the free-throw line.

Shortly after the game, LeBron James went to Instagram to post his praise for Tatum, labeling him with a new nickname in the process.

James (who had 29 points, 8 rebounds, and 9 assists in the Lakers victory) posted a photo of himself on the sidelines next to Tatum and wrote, “That boi to the left of me is an ABSOLUTE PROBLEM!!” 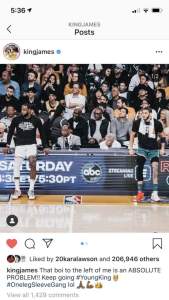 Speaking on ESPN’s The Jump this week, Tatum gave his stamp of approval to the moniker.

“I’ll take that nickname,” he told Rachel Nichols with a smile.

Jayson Tatum Had Been on a Hot Streak

The numbers boosted Tatum to an Eastern Conference Player of the Month award.

Tatum recalled for Nichols exactly how he heard about the praise he got from James and why, despite having just squared off against James, the nickname was touching for him.

“I remember he posted it right after we played them, we were in L.A. and I was back in my hotel room and I was taking a nap because it was an early game,” Tatum said. “I remember my best friend from back home, he called me like, ‘Bro, go in your Instagram, LeBron just gave you – he just shouted you out.’ I know I’ve seen it.

“And I’m a competitor. But I realize at the end of the day, that’s one of the greatest players ever and somebody I looked up to growing up, you know, so I still understand that’s a big deal.”

Tatum did discuss another less amiable moment he had with James nearly two years ago in the Eastern Conference playoffs. The upstart Celtics, playing without Gordon Hayward and Kyrie Irving, had managed to survive their way to the seventh game of a series against James and Cleveland, who had won the East three straight years.

In the final game of the series, both teams were exhausted and struggled to score. But with 6:55 to go in the game, Tatum came off a screen by Al Horford, drove to the basket, and dunked heavily on James, following it up with a scream in the face. Tatum made a 3-pointer shortly thereafter to put the Celtics ahead, but the Cavs outscored Boston, 16-7, down the stretch to win.

But the dunk was memorable.

“I curled to the basket,” Tatum said, “and I remember I saw him coming and I was like, ‘It’s Game 7, I can’t lay it up.’ So I was just trying to get fouled, attack the rim strong. It happened like that and I dunked it. I remember I bumped him and I yelled. I’m a pretty laid-back guy, I don’t really yell or talk when I play or anything. But my emotions just took over me.”

With good reason. Check it out:

READ NEXT: Kevin Garnett Opens Up About Celtics, Hall of Fame