Getty Devin Booker smiles in the second half of a game against the Milwaukee Bucks.

Devin Booker played quite well during the NBA bubble in Orlando, Florida.

Despite not making it to the NBA Playoffs, the Suns had a successful outing. They went 8-0 and shined behind the stats stuffer that Booker was. If you’re tardy to the party, Booker averaged 30.5 points, 6 assists and 4.9 rebounds in 33.8 minutes a game for Phoenix.

Many unfamiliar with Booker saw his exciting brand of basketball and with that attention comes speculation that he won’t stay with the Suns and it isn’t a secret that he wants to become teammates with his friends Karl-Anthony Towns and D’Angelo Russell.

In an interview with SLAM Magazine’s Max Resetar, Russell stated that he plans to team up with Towns and Booker at some point during their careers. “We gotta do this again, when we’re all on the same team,” he said.

“Nah, don’t cut it. “Y’all got it on footage. When we’re all on the same team—I ain’t gonna tell you which team because I don’t know—we’re gonna do this again.”

So will it happen?

“I don’t see why you don’t,” ESPN’s Jay Williams told me on the Heavy With Scoop B Show.

“If you have the number one pick, whatever assets you want with the exception of maybe D Lo and KAT?

“And I have to be real with you I love D-Lo too, but if you have to have D-Lo in it [for] I don’t know, for D-Book? D-Book is different and I would love to see D-LO, D Book and KAT together. But I’m willing to let go of the house and future picks to get Devin Booker.”

Towns averaged 26.5 points, 10.8 rebounds, 4.4 assists and 1.2 blocks per game for the T-Wolves. Russell averaged 21.7 points, 4.6 rebounds, 6.6 assists and 1.4 steals per contests this season for both the Golden State Warriors and the Timberwolves.

Here’s the million dollar question: Would a trio of Booker, Towns and Russell work? 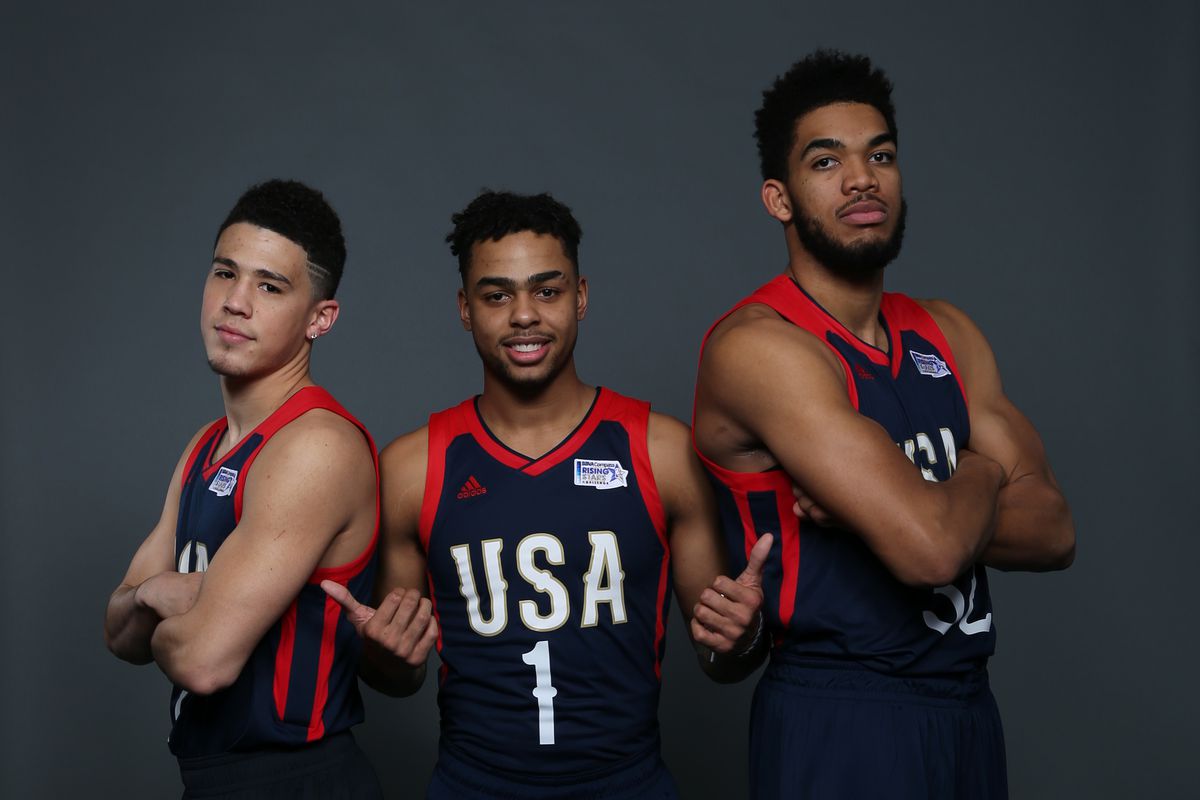 “I think a lot depends on ownership,” Jay Williams told the Heavy With Scoop B Show.

“I have been hearing rumors that their team is going to be up for sale potentially. I think Karl Anthony Towns is a franchise player; he is one of the most special individuals that I have ever seen. I love him. I’ll always be objective when it comes to his game. I think for Karl being with D’Angelo Russell, I like the duo; the fact they got the number one pick in the draft, I felt happy for them. It really depends on who they are surrounding Karl with and I think that is a big question, man. You can love a city more than anything, but if you don’t have someone in the front that surrounds you with [the] talent to win, after a while, you are going to start looking at them like: ‘What am I doing?’ ‘What am I doing here?’ ‘Do I believe in management to help get to where I want to go?’ And if that’s not the case, the franchise also does what’s best for the franchise. I don’t look down on players who have to do what’s best for the player. If Karl gets into that situation, he is going to have to make that decision and I’ll stand behind him regardless.”