Getty Conor McGregor walks to the ring prior to his super welterweight boxing match against Floyd Mayweather Jr.

The former two-division champion has been on the sidelines since his last outing against Dustin Poirier, where he suffered a horrific leg break injury at UFC 264 in Jul. 2021. He shares regular updates about his recovery with fans and recently uploaded some training footage as he inches closer to his comeback.

Hasbulla first gained popularity on TikTok for his childlike features. He is believed to have a form of dwarfism stemming from a genetic disorder that stunted his growth early. He made headlines in the MMA community for recreating Khabib’s iconic weigh-in, earning the nickname Mini Khabib.

Hailing from Dagestan, he is a friend of former lightweight champion and McGregor’s bitter enemy Khabib Nurmagomedov. He got into a dispute with the Irish icon online after he named his chicken after McGregor.

“This is my chicken, named Conor McGregor. There’s my beauty,” Hasbulla said in a video filming the pet via The Sun.

‘The Notorious’ is not one to shy away from conflict and fired shots right back at Hasbulla, calling him a “little smelly inbred” as well as asserting to “boot that little gimp over a goal post.”

Their feud did not end there as Hasbulla responded further, writing, “I don’t follow bums… didn’t know someone was running their mouth. At least one of us kept an undefeated record. Hasbulla 1. McGregor 0.” 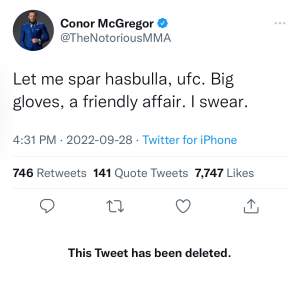 McGregor’s Return Will Be the Greatest Comeback in Sports History, Says His Manager

Audie Attar, McGregor’s manager, and business partner believes ‘Mystic Mac’ will have a historic return to competition. Although there has been speculation about McGregor’s ambitions in the sport, Attar is confident his client will be back inside the cage at the top level.

“First and foremost, he loves this sport,” Attar told MMA Junkie. “I think that’s the one thing that’s very special about him. It’s why it’s allowed him to reach a level of success that most fighters aspire to achieve. He loves it. The second part is he’s a competitor.

“Does he have more ambitions and goals that he wants to achieve? Absolutely. I think that’s what makes it so special and so intriguing and it’s going to be an interesting story, and I do believe it’s going to be the greatest comeback in sports history.”