Reports have surfaced that NYPD cops are using Google Glass on patrols. Here’s what we know so far about this developing story.

1. NYPD Has a “Few Pairs” of Google Glass

Does this remind anyone else of Robocop? http://t.co/3yS8k0CyIT

An unnamed member of NYC’s law enforcement division told reporters at Venture Beat that NYPD has “a few pairs” of the $1,500 specs.

“We signed up, got a few pairs of the Google glasses, and we’re trying them out, seeing if they have any value in investigations, mostly for patrol purposes,” the source told reporters.

2. Glass Might Let Cops See a Suspect’s Record at a Glance

Fox News reports that NYPD officers on patrol might be able to use Google Glass to “instantly see a suspect’s arrest record, mugshot and other key information.”

3. NYPD Could Be a Big Buyer of Glass

ZDNet notes that the NYPD has 34,600 officers, as well as an annual budget of around $4.6 billion. If the police testing out Google Glass find it useful, it’s possible that NYPD might place a large order for the product.

4. NYPD’s Not the First Agency to Test Glass

According to CopTrax, the Byron, GA police force used Google Glass in a field trial back in October. Glass was worn during firearms practice, as well as during traffic stops.

In the Bloomberg video above, computing expert Thad Starner speculates about how Google Glass will be used in the future.

5. Google Is Not Actively Working with the NYPD

According to the Telegraph, a Google spokesperson is on the record stating that Google is not working with the NYPD. The NYPD simply signed up through Google’s testing program to try out the product.

As you can see from the tweet above, however, many average citizens are worried about how NYPD officers will perform on the job when using Glass. 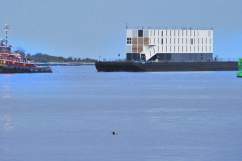