The world of video games is reaching a new plateau with next-gen consoles and the rise of mobile/independent titles.

Along with these evolutionary changes in the world of interactive media comes the return of virtual reality. The Oculus Rift and several other devices are ready to take over the world of mainstream gaming and become just as big as motion gaming was when the Wii took over your living room. TrinityVR is preparing to give gamers a more intuitive way to play 1st-person experiences with the Trinity Magnum.

Here’s everything you need to know about this new VR/motion controller combo and the Kickstarter campaign behind this new piece of tech.

1. The Trinity Magnum is a Motion Controller Designed for Virtual Reality Experiences

TrinityVR’s Magnum device is a precision motion controller designed with the intent to offer gamers an even better virtual reality experience. While holding the Magnum, you can use it to handle independent actions with your hands that also work in conjunction with virtual reality headset motions.

2. Its Uses Change Depending on a One or Two Handed Control Scheme

The Trinity Magnum can be molded in different ways (gameplay-wise) in order to meet the qualification of varying game experiences. For instance, holding the controller with one hand (Mono Grip) could replicate the experience of wielding a sword, tennis racket or any other one-handed object. Or users could hold it with two hands (Dual Grip) and use it to control a fire hose or a control stick for an airplane or other vehicle.

3. The Controller Setup is Simple and Instantly Understandable By Gamers and Non-Gamers Alike

The Trinity Magnum’s control layout was developed in order to offer accessible inputs for VR that would improve the muscle memory of those who wield it. It comes outfitted with 1 trigger, 2 analog joysticks and 4 tactile buttons that can set to custom settings for various activities.

The Trinity Magnum also comes outfitted with a rumble feedback mechanic that can replicate the actions of whatever’s occurring through a VR headset screen. The low-latency, 1:1 tracking implementation within the Trinity Magnum should provide the experience that most 1st-person shooter fans have wanted in their home for years.

4. It’s Also Being Designed to Work in Conjunction with Other Gaming Peripherals and PC Webcams

The developer kits for the Trinity Magnum is also developed to work with the following motion controller devices and programs for game consoles and PC’s – the PlayStation Eye, Microsoft Kinect for Windows and most webcams for laptops and desktops.

5. Two Separate Game Projects Have Been Created to Show of What the Trinity Magnum is Capable Of

Two supported developer projects have been made for the Trinity Magnum device thus far – the in-house developed Quail Hunt VR and the 3rd-party game called Z0NE (which has been produced by PixelRouter). Check out the video above to get a look at how Z0NE looks and controls from the viewpoint of someone wearing a VR device. 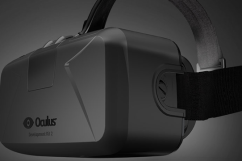