RT if this is you… #ElectionDay pic.twitter.com/H5EZWsZHMa

A couple of companies have dedicated themselves to calling the election early using social media.

Top #ElectionDay issues searched with each candidate today. For #Clinton it's abortion; for #Trump it's racehttps://t.co/32O0weFqim pic.twitter.com/QeNYuiUP1e

Spredfast, a social media analytics firm, is looking at key swing states and using Twitter, Facebook and other social media sites to see who’s ahead. This story will be updated as Spredfast and CNET, which has exclusive access to Spredfast’s numbers today, update their information.

So far from Spredfast and CNET:

Florida: Clinton was leading with millennial men and women, and Trump led with 55+ demographic, according to social media. Trump ultimately cinched the win.

New Hampshire: Trump is currently leading by a moderate margin.

Pennsylvania: Clinton is currently leading by a small margin.

North Carolina: Clinton seemed to be leading earlier today according to social media, but Trump won the swing state.

Ohio: Clinton was leading by a moderate margin according to social media, but Trump cinched the victory.

Michigan: Clinton is currently leading by a moderate margin.

Colorado: Clinton led by a moderate margin according to social media, and did win the state.

The above state summaries were reported by CNET. Spredfast is releasing commentary via Twitter:

Today nearly 16K people have mentioned that they are voting for Regina George because she got hit by a bus. #ElectionDay #meangirls pic.twitter.com/jjsJgacNdw

Within #ElectionDay coverage, self-identified Hillary supporters have had 3x the amount of conversation as Trump supporters #SpredVotes pic.twitter.com/l0injH2Y9e

“Even with decreasing attitudes towards the campaigns, Clinton maintains a lead in most swing states going into this morning,” Chris Kerns, Spredfast’s VP of research and insights, told CNET.

Here is a screencap of Tweeting the Election’s site, showing the default maps of liberal and conservative tweets about the election. (Tweetingtheelection.com)

One of Tweeting the Election’s interesting features is a word could. Here are some common words in tweets by either Liberal or Conservative users on the topic of Voter ID. Keep in mind that the word cloud updates in real time on the site, but this is a screencap from 3:15 p.m. Eastern Time. (Tweetingtheelection.com)

The California Institute of Technology is joining the race as well, with a website called Tweeting the Election. The site breaks down tweets by the political background of the user and their location, and will include takes on absentee ballots and polling places in addition to regular Election Day coverage.

How accurate are these predictions?

Well, companies like Spredfast and Brandwatch actually called Trump’s popularity in the GOP candidate pool and highlighted issues Bernie Sanders was having against Hillary Clinton.

These firms can be fairly accurate, but there are barriers to their calculations. For example:

Bots Could Be Causing Trouble 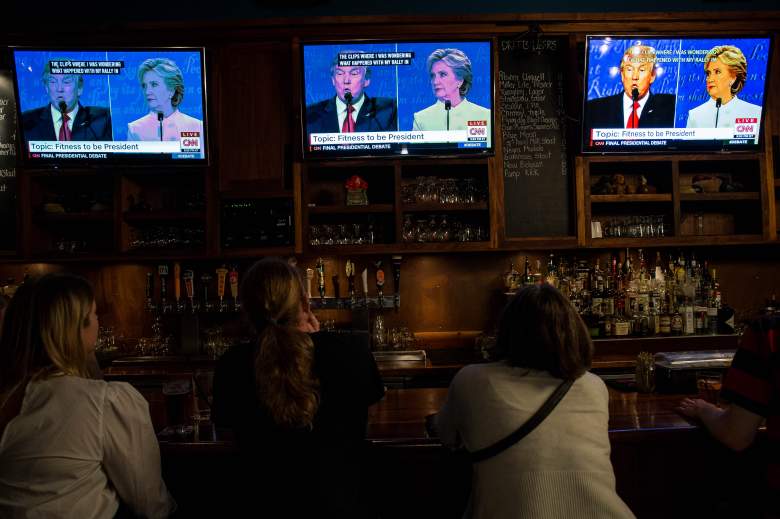 One of the possible issues in social media based coverage is bots posting to profiles.

The University of Southern California released a study in early November stating that approximately one fifth of election related tweets are generated by Twitter bots, which may throw a wrench in Twitter studies.

Emilio Ferrara, a researcher at USC, even suggested in the paper that these bots “could threaten the very integrity of the 2016 U.S. presidential election.”

The study analyzed 20 million election related tweets between Sept. 16 and Oct. 21, and found that robots produced around 3.8 million of those Tweets (roughly 19%). The bots also made up 400,000 of the 2.8 users, or 15% of the population in the study, reported PsyPost.

The interesting part is that Trump’s bot-produced posts were almost all positive and boosted his popularity. Only half of bots talking about Clinton supported her, with the other half criticizing her, according to the USC study.

It’s unknown where these bots come from, but political parties, local, national and foreign governments or even “single individuals with adequate resources” could be behind them, according to the study.