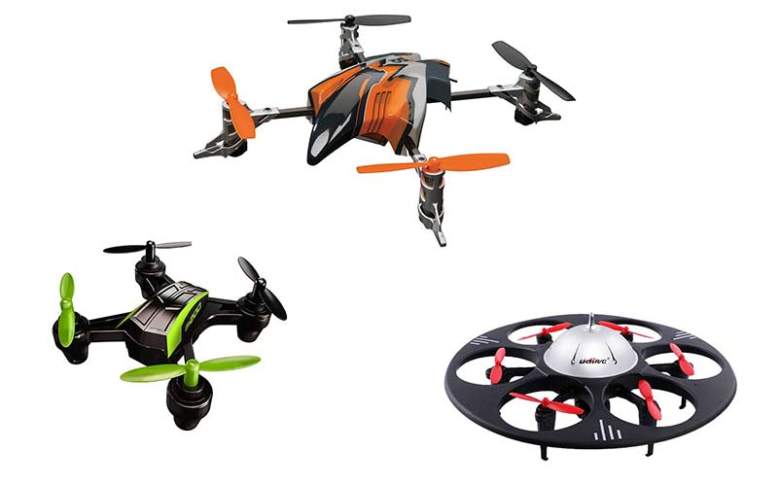 Looking for the best small drones for sale in 2018? We’ve got you covered with the buyer’s guide below.

There’s simply no denying that drones have grown significantly in their popularity. Now, you can’t go to a park or a playground in the summertime without seeing people looking up at the sky with a controller in their hands flying small drones. In fact, at one point, the FAA was seeing about 10,000 drones registered per day, and there is an increasing number of posts around the web discussing the safety of drones in specific areas, like airports.

Pair the regulations and the fact that there are so many different types of drones available, purchasing one for yourself might seem like a daunting task. Do you want one of the more expensive and feature-rich camera drones, racing drones that hit impressive speeds, or simply something cheap to get into the hobby to try it out for yourself?

There’s also size to consider, as quadcopters come in at a variety of different sizes. Do you need a drone you can throw in your backpack, or are you okay owning something that has its own sizeable case?

Buying drones is all about options, and there are hundreds of options out there. After testing more drones than I know what to even do with, it’s safe to say that I’ve done my fair share of looking up at the sky with a controller in my hands, myself. The list below contains the top 5 best small drones for sale on Amazon, starting at the size of a quarter.

For one of the most unique-looking drones on the market right now, look no further than the DBPOWER UDI U845 RC UFO Drone. Technically speaking, it’s a hexacopter (it has six blades), but it’s designed to look like an alien spaceship, the typical UFO design we’ve all been seeing in poorly rendered photographs since the 1960s.

This little drone comes packed with features that are great for new drone pilots. For one, it comes with two batteries right out of the box, so you don’t have to purchase a second. Each battery lasts for roughly 8 minutes on a single charge, and the batteries charge quickly via USB. Secondly, the roundness paired with its plastic shell make it more resistant to damage that would otherwise break a drone of its size; its outer shell allows it to bump into things without taking damage.

It also comes with a surprisingly formidable camera that provides a live feed via WiFi to your smartphone. In fact, you can control this drone with your smartphone OR the remote control that comes with it (I preferred the remote control, personally, as it felt more responsive). You’re also able to remove the camera for a more responsive flight. The UFO drone also has three different flight modes that each have a different level of responsiveness and ease of use. Another great feature of this mini drone is its low voltage alarm that lets the user know when the battery is almost fully depleted.

For those new to flying drones, this model also comes with a one-button flip button that makes doing 360° flips incredibly easy and fun. The DBPower UDI U845 is easy to use, looks cool, and has a relatively long battery life when compared to other drones in its class.

I’ve been singing the praises of the Hubsan X4 H107C for awhile now. This mini drone holds a 4.0 out of 5.0 star review average on Amazon from over 960 reviewers. It measures just 2.7 x 2.7 x 1 inches, fitting in the palm of your hand to make your hand look gigantic comparatively. There are three designs avalable: black with red stripes, black with green stripes, and red with silver stripes — each of which looks great. It also has a detachable lightweight airframe for new pilots who might be afraid of crashing it and breaking it.

It has a 6-axis flight control system with an adjustable gyro sensitivity so that pilots of any calibur are able to tailor it to their specific needs. The battery lasts for nearly 7 minutes, so I’d recommend getting extra batteries. Although it has a camera (it’s just .3MP video recording), it doesn’t come with the necessary Micro SDHC card needed to record and view footage. So, if you want to use its camera, you’ll need to purchase a cheap SDHC card (although, admittedly, the camera is virtually useless because the resulting quality is poor).

Where this micro drone shines is in its ease of use and zippiness. The controls are precise, and the X4 H107C’s size allows you to carry it in your pocket for transporting. What’s more, you’re able to fly it at night, thanks to its many LED lights. It also has an attractive price that’s under $25, which is anothe reason why I consider it one of the best toy drones available.

What I love most about the Heli-Max 1SQ is its aggressive look. For a drone of such a small size, its creators put a surprising amount of detail in its canopy’s design. Also, because the rotors are orange in the front and black in the back, it’s easy to track which direction your drone is facing from a distance. It’s perfect for flying both indoors and outdoors, as it has four independently controlled rotor blades with a Triple Axis Gyro stabilization system.

It’s a very powerful drone — surprisingly powerful, in fact. With practice, you’ll be able to bend the Heli-Max 1SQ to your will with ease. Even on breezy days, the 1SQ is easy to control, thanks to its power and agility. Like many drones currently available, you’re able to adjust the gyro sensitivity on the go and with ease.

As far as durability is concerned, I’ve dropped mine numerous times from at least 8 feet in the air onto a hardwood floor without a scratch. It’s the drone’s canopy shell that makes it so durable. Charging the batteries takes roughly a half hour, and each flight lasts roughly 6 minutes.

If you haven’t used a Sky Viper brand drone before, let me tell you that they’re one of my favorite low-end brands on the market (in fact, we included one of their drones in our list of the best beginner flying drones). Their nano drone, the M200, measures just 2.75″ x 2.75″, making it small enough to fit in the palm of your hand.

It can fly both indoors and outside, and it has an easy one-touch stunt button that will allow you to perform great barrel rolls and flips with a simple tap of the button. Like most drones currently available, you’re able to adjust the flight sensitivity and responsiveness. So, whether you’re a new pilot or an experienced one, you’re able to find the perfect sensitivity to fit your needs.

It has a surprisingly large controlling radius as well, as you can control it from 200 feet away, thanks to its 2.4GHz transmitter.

For the smallest drone on this list, the clear winner is the HVR Mini Drone, which as you can see from the photo above isn’t much bigger than a quarter. And, it weighs just over 6 ounces. Yet, somehow, it includes a video camera and memory card slot (4GB memory card included). Of course, the resulting footage doesn’t make it the best drone with camera or anything to rave home about, but the fact that it’s there should be impressive enough.

This is the smallest drone on Amazon as of writing this. It comes with a small controller that’s easy to use, and after just a bit of practice, you’ll be able to fly the HVR Mini Drone with ease. It also has an easy flip button that will allow you to perform front flips, back fips and barrel rolls with just two button presses.

The drone charges via USB in roughly 20 minutes, and each flight lasts for about 5 minutes. Unfortunately, it doesn’t have a battery that can be removed/replaced, so you’re only able to enjoy it in five-minute bursts of fun. Still, its size is something to marvel at, and the fact that it’s so incredibly responsive to its controls makes it well worth the buy.

Read More
Drones, Shopping, Toys
While most of the best drones are quite sizeable, these micro quadcopters and hexacopters are incredibly fun to fly.