Disney’s fantasy tv film Descendants is everything a child could want from a show, so it’s safe to say, the Descendants 3 dolls are sure to be near the top of every child’s wishlist.

Honestly, Descendants is such a good idea I’m amazed it hasn’t been done sooner. Kids love Disney characters and Glee-like pop songs, so why not have a tv film based on the adventures of the offspring of popular Disney heroes and villains?

Normally when it comes to movie tie-in toys, a lot of them are rushed through production to fill quotas without any care for the end product. The Descendants 3 dolls, however, are a different breed. These aren’t rushed out dolls designed to make a quick buck. Each doll comes with exquisitely-designed clothing, has modern, cutesy faces, and then there’s the hair, which for my money, is some of the best in the industry.

It’s easy to fall into the trap of generic hair when it comes to dolls, but the Descendants 3 dolls feature truly vivid colors and expert styles. Pick any doll in this line and you can be certain their hair will impress.

And want to know the best thing about the Descendants 3 dolls range? They’re not over-priced, which is always music to my money-saving ears.

One quick point I need to make before we jump into where to buy the Descendants 3 dolls, these dolls are popular. Kids love Disney, and with Frozen 2 toys set to get kids back into Disney properties, you can bet the Descendants dolls are going to sell out fast.

So if you’re planning on picking these dolls up as a Birthday or Christmas gift, make sure you buy early to avoid disappointment.

With all that out the way, let’s take a look at each of the dolls in this line. 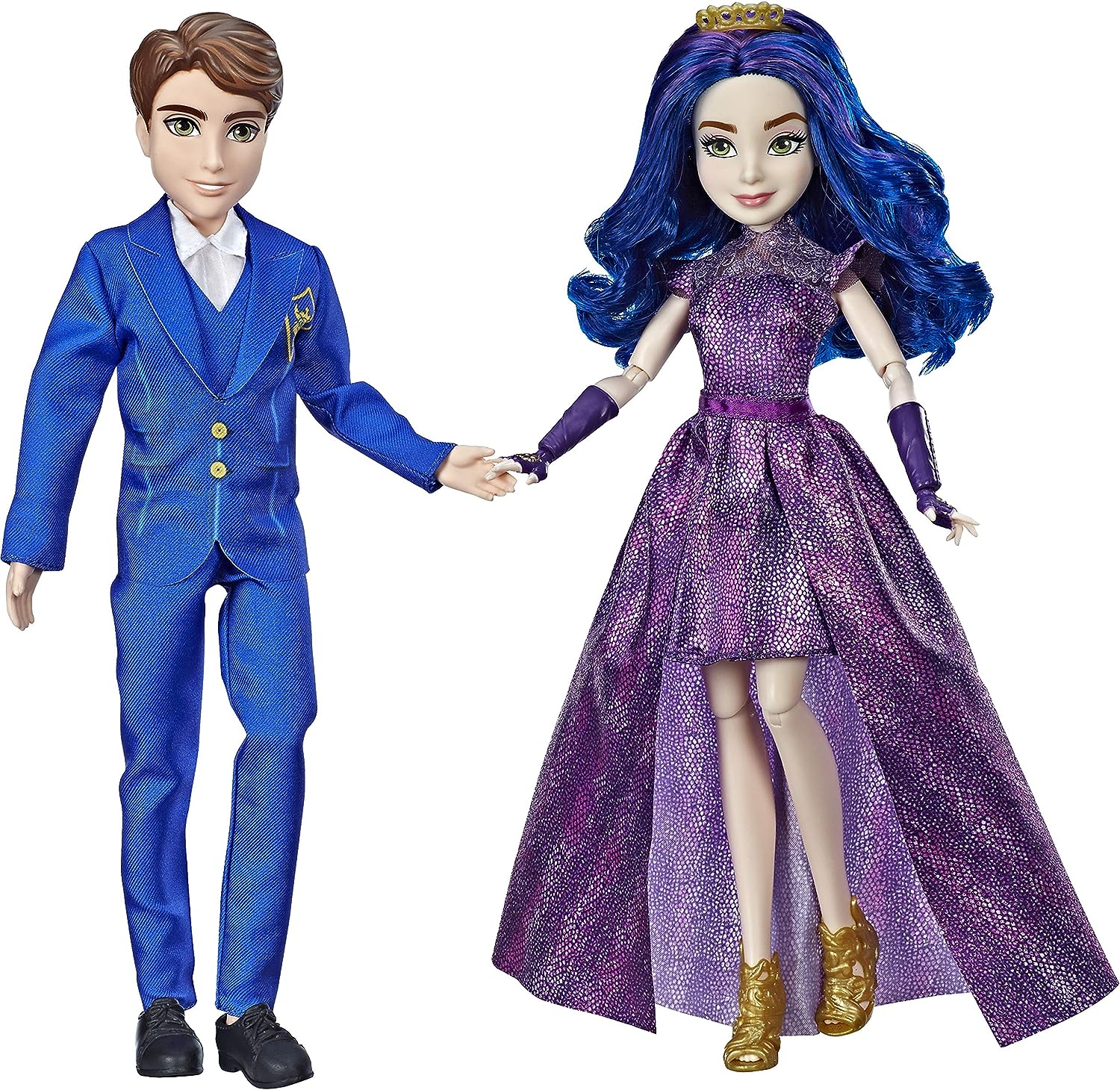 Seriously, check out Mal’s hair (the one on the right). The vibrant blue with flicks of purple is some of the best doll hair I’ve seen this year. And that’s before we factor in the loose curls. And the dress!

The dress has this whole ball gown feel going on, and the results are excellent. Multi-layered clothing rocks, and when you finish it off with some stylish gloves and golden sandals and I’d say that’s a win.

Then we have the Ben doll, which if kids are a fan of Mal, they’re going to want. There’s less to get excited about, as is the case with most boy dolls, but Hasbro has done a great job of getting the hair mold right, and it’s full of highlights for added detail. As for Ben’s suit, it’s decent. It’s well-made and looks classy. It’s just when you’ve got him standing next to this excellent Mal doll, it’s hard not to feel sorry for him.

I expect this two-pack will be one of the first to sell out, so if you’re thinking of picking it up, while I won’t rush you, I’d at least consider grabbing it sooner than later. 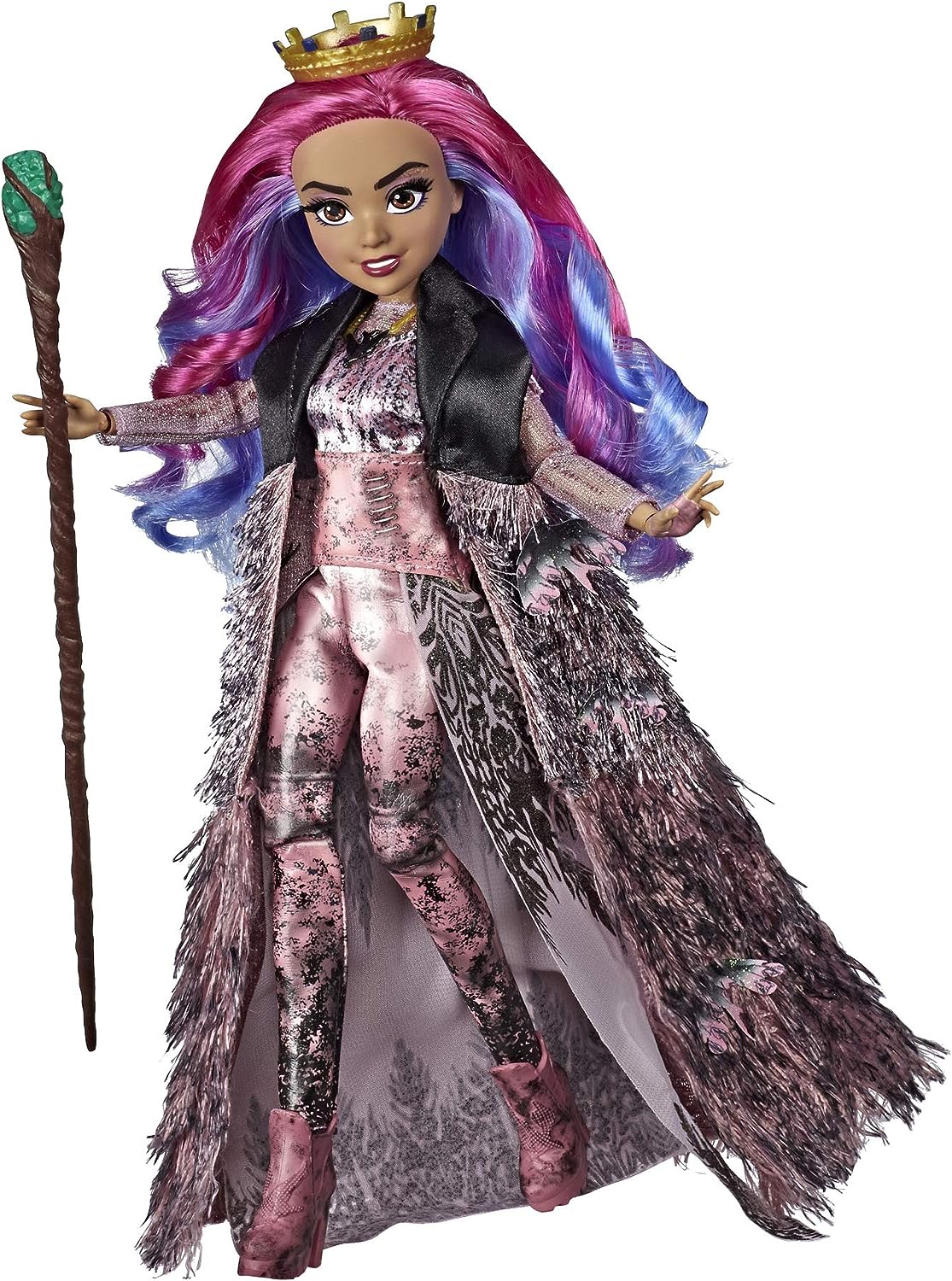 The Disney Descendants Audrey Doll is another doll that’s on a whole other level.

Again, it’s all about the hair. Curls meet magenta with a blue layer and flecks of purple sown in. I’m pretty sure the hair is enough to sell these dolls but let’s carry on anyway.

What you get in the deluxe version is the highly-detailed feathery cloak, more detail in the corset and coloring throughout the outfit, and that rather awesome staff.

There is a more basic version available if you’re looking to save money, but you don’t get the coat, extra detail, and staff included. It’s still good, of course, but if you can afford the deluxe version, that’s the one I’d recommend going with.

I know I keep going on about the hair, but getting Dizzy’s trademark space buns right is key to this doll looking like it should. As you can probably guess, Hasbro nailed them. What I especially love is how they’re not tight, perfect buns. They’ve got a slight frizz to them, just like they should.

Elsewhere, the face is wonderful, as are the glasses, and the colorful dress is top-notch. My only complaint is this doll doesn’t have any articulation, which given it’s one of the basic dolls, makes sense. It’s cheaper than the deluxe dolls, so it’s all good.

Dizzy is popular with younger kids, say six to 10-year-olds, so keep that in mind if you’re picking it up for older kids.

Hasbro did a really great job getting that denim look just right with the Disney Descendants Uma Fashion Doll.

Denim is super-expensive and far too thick for doll’s clothes, yet Hasbro has somehow managed to create a realistic denim look on fabric, which is all kinds of wizardry. As someone who writes about toys for a living, that kind of magic is really cool to see, and I’m sure kids will appreciate authenticity over something unrecognizable.

Something else, though small, is how great that single braid came out on the hair. It’d be easy to leave it out and no one would complain but Hasbro appears committed to making the Descendants 3 dolls the best they can be.

The Disney Descendants Celia Fashion Doll has some serious style, which is something you’d expect from the daughter of Dr. Facilier.

It’s the top hat that really makes this doll. Add a top hat to any doll and it instantly becomes cooler. Them’s the rules.

I love how Hasbro went all-in on the afro-Carribean hair, too. With the wrong company behind black hair, you end up with something completely unrecognizable. Thankfully, I don’t need to moan here, as Hasbro did a great job matching the hair of actress Jadah Marie.

As with the other basic dolls, I’d have liked more articulation, but as the price is low, I won’t complain too much, simply because of how much Hasbro got right with this doll. 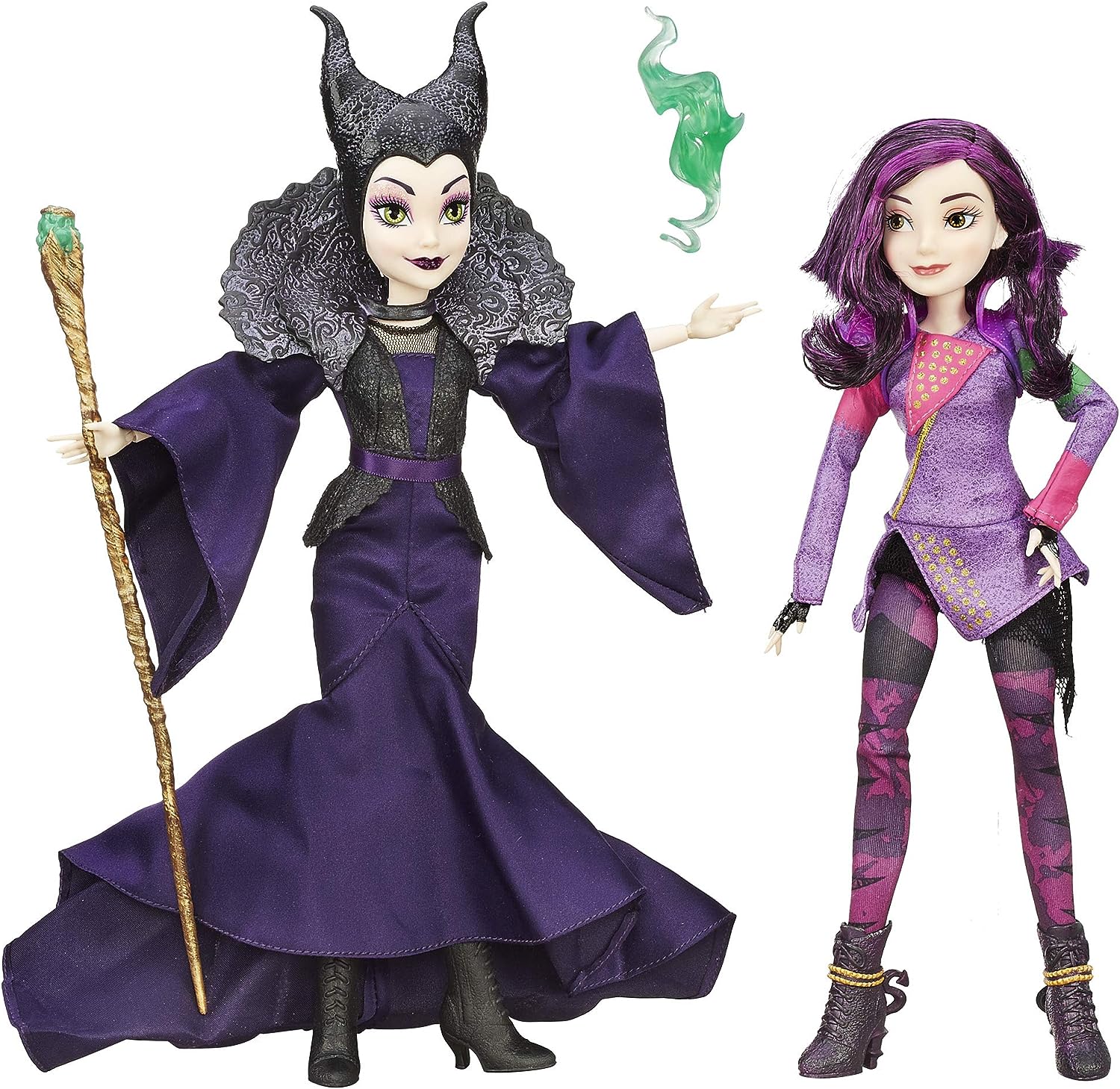 Are there any other Descendants dolls worth checking out aside from the ones above? In a word, absolutely!

My personal pick is the above Amazon Exclusive Disney Descendants Mal Isle of The Lost & Maleficent. Both of the dolls in this pack are exceptional, and young kids will never turn their noses up at a Maleficent doll. Spooky-looking dolls are always going to be popular.

Plus that dress is killer!

Other Descendants Dolls I’d consider worth checking out are all below for your reading pleasure.

The best Descendants Mal Costume is this one on Amazon.

It’s a printed jumpsuit. The advantage of which is it’s not going to cost a small fortune. It also comes with a printed jacket with collar and velcro closure, and thanks to the elastic waist, it should have a certain amount of give.

The only thing this costume doesn’t come with is a purple wig, although you can pick them up cheaply enough anyway.

wpDiscuz
0
0
Would love your thoughts, please comment.x
()
x
| Reply
Looking to shop smart and pick up the Descendants 3 dolls online? We've got all the info you need to know on the inside.