The Powkiddy X18S is at long last out in the wild. But what is this Android handheld capable of? How does it fare against the best retro handhelds of all time? Can Powkiddy marry a low price point with high-end hardware? Find out all that and more as Heavy on Toys takes on the Powkiddy X18S.

In short, the Powkiddy X18S is a super-power Android gaming device capable of running a wealth of different emulators. If you’re looking to play retro games up to PS1 and a host of N64 and Dreamcast games, the Powkiddy is currently one of the most powerful, best deals going.

Sure, it may not make the list of the best Steam Deck alternatives, but it’s definitely got its place in the market. 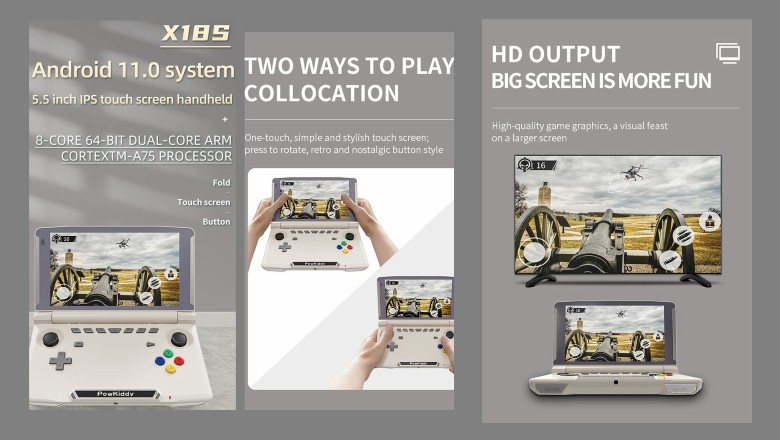 Don’t let the fact this thing can fit in your pocket fool you. The Powkiddy X18S is a powerhouse. Up to PS1 is a given nowadays, so you can expect 8-bit, 16-bit, and PS1 to work with minimal issues.

Normally, this is where a lot of retro handhelds tap out. The Powkiddy X18S, however, manages to pack in enough power to blow its competitors out of the water.

Dreamcast will run brilliantly, as will a swathe of N64 titles. Of course, when we’re talking about any emulation device, not every game has been tested, so there are bound to be some that won’t work. But on the whole, I can say Dreamcast and N64 emulation is at a point where it’s satisfyingly playable.

Moving on to the more powerful systems, that’s where things get interesting. A selection of GameCube titles run near flawlessly, though things can be a little hit and miss. The Legend of Zelda: Wind Waker is the exception here due to mass slowdown in areas with lots of grass, and Resident Evil 4 is a little too choppy to be considered playable. Both run okay, but I’m of the mindset ‘okay’ isn’t a fun experience.

Games like Mario Kart Double Dash and Luigi’s Mansion, on the other hand, work really well. Mario Kart does have some stuttering, but it’s not enough to ruin it. Likewise, Soul Calibur II and Sonic Riders both run smoothly.

What really blew my mind, though, was PlayStation 2. Now, you shouldn’t be buying this device if you want to play PS2 games. I’d say the majority of PS2 games aren’t able to be played in the way you’d want to. That said, some games – the original Kingdom Hearts, for example – appear to run at near full speed thanks to the combination of the Mali G52 GPU and the truly excellent Aether 2 Android port.

As I say, don’t buy this device expecting perfect PS2 emulation. But if you do, by all means try testing out the games you’ve got. You will be surprised by just how versatile this system is.

This all comes down to what you want from the system. The Powkiddy X18S is a high-end emulation device with a frankly poor build quality. The GPD XD Plus, conversely, is an older Android device with a much higher build quality but lacking in sheer horsepower. To be honest, they are better options out there now if it’s up to PS1 you’re after (like the Anbernic RG351 Series). The clamshell design is really the only major selling point of the GPD XD Plus.

With the RG552, this is a premium device from the same company that’s gearing up to release a handheld gaming PC, but it’s a tale of two cities. It features a stunning design and a frankly gorgeous screen capable of upscaling the games it can play. Systems like the SNES or Gameboy Advance look better on the RG552 than they do on the original hardware. The only real downside is the RG552 isn’t all that powerful. Up to PS1 and some Dreamcast and N64 titles will work, but it lacks the raw power to emulate anything higher. The five-inch screen, that puts it on par with a Switch Lite, really is what makes the RG552 stand out.

In terms of which offering is best for you, it depends on what you want it for.

For 8-bit, 16-bit, and PS1 eras, the RG552 looks the best visually and feels the best in-hand. If it’s sheer power you’re after, the Powkiddy X18S wins that round easily. As for the GPD XD Plus, its time has come and gone. If you can get one cheap, maybe. Otherwise, it’s a choice between high-end visuals at a higher cost in the RG552, or god-tier power but a lesser build quality in the Powkiddy X18S. 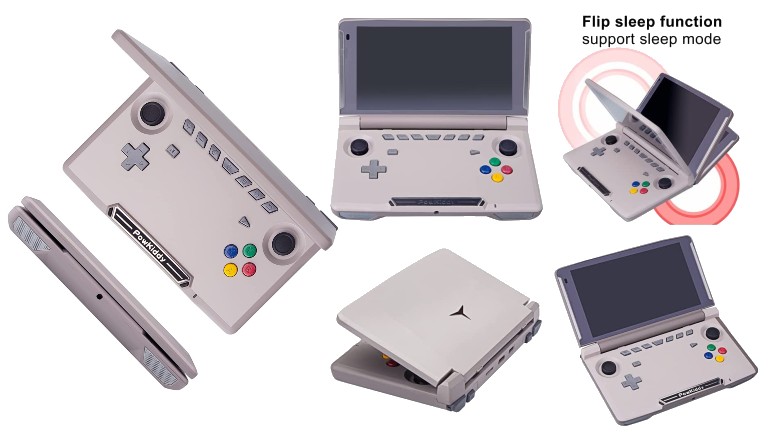 For those not in the know, AetherSX2 is the work of a developer known as Tahlreth. It is, essentially, a PlayStation 2 emulator for Android devices.

Based on the PCSX2 emulator for PC, AetherSX2 has wowed the retro community with its ability to accurately play a library of classic titles. It’s still early days, of course, so don’t expect 100 percent accuracy across the board, but there are already plenty of games that work surprisingly well depending on the power of your device.

So, does the Powkiddy X18S support AetherSX2? In short, yes, and the results are mind-blowing. I’ve seen the original Kingdom Hearts running brilliantly and titles like Burnout 2 offering something that you could feasibly play without getting annoyed by performance issues.

Just keep in mind, the Powkiddy X18S wasn’t designed with PS2 in mind, so as of right now, I can’t recommend it as a portable PS2 emulator, simply because the compatibility isn’t where it needs to be. Yet. Give it six months and check back in. It’s going to be interesting to see just how much power the community can squeeze out of this beast.

We Need to Talk About Build Quality

Okay. The Powkiddy X18S is a powerhouse. That much is true. But with affordable handhelds, there’s often something people aren’t talking about that allows companies to sell these devices for such a low price. In the X18S’ case, it’s the sub-standard build quality.

While the GPD XD, which the X18S has lifted inspiration from for its design, felt like a more well-rounded product, Powkiddy decided to forgo the premium feel in favor of readily available parts. The result isn’t great.

Buttons lack tactile feedback, the directional pad should be higher in from the case, the colored face buttons can get stuck due to the extra coating of paint, and the triggers – specifically the L2/R2 equivalent – are utterly dire. If you plan on playing any first-person shooters, the first thing you want to do is change L2 to L1 and R2 to R1.

Thankfully, the screen isn’t an issue. Color is a little more grey compared to the RG552, but that makes it feel more like the console it’s emulating, so it’s all good.

It’s the build quality that brings the Powkiddy X18S down. It’s a powerful device capable of some really impressive stuff, and it’s still easy to recommend thanks to its low price. It’s just a shame Powkiddy didn’t spend a little more on the overall build.

Although prices vary depending where you go, there is a science to getting the best deal.

Now, with Amazon, you’re buying from the US and you’ll be dealing with US-based customer service should anything go wrong. It can often also be delivered quicker (be sure to check the delivery date). All that, to some, that’s worth the extra cost. If you’re in a rush and want an easy route to getting your new toy, sure, go with Amazon. If, like me, you don’t mind waiting a little longer, and want to save a lot more, go with AliExpress.

Buy on Amazon | Buy on AliExpress

What Custom Firmware Options Are Available

As of right now, there aren’t many options I could comfortably recommend. Sure, you can get a version of LineageOS running, but it isn’t really worth the effort for people unfamiliar with flashing devices. Plus Powkiddy is constantly putting out updates so sticking to the current official firmware is recommended.

Currently, the best way to get Google Play running on the Powkiddy X18S is through changing to a custom firmware, such as LineageOS, though that isn’t something I recommend unless you know what you’re doing. In terms of out-of-the-box support for Android games like Call of Duty, there isn’t any, unfortunately.

wpDiscuz
0
0
Would love your thoughts, please comment.x
()
x
| Reply
Capable of playing PS1, SNES, and even some GameCube titles, the Powkiddy X18S is a monster. So what's the catch? Find out more inside.