The Young and the Restless returns on Thursday with an all-new episode as Phyllis (Gina Tognoni) continues on with her plan to take down Victor (Eric Braeden), amongst other Genoa City happenings. 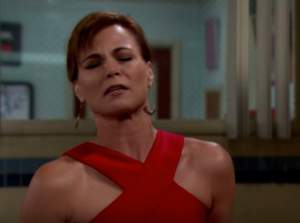 Phyllis — pictured above in Thursday’s Y&R episode — voices her excitement to Billy about taking down Victor. (CBS Screenshot)

After learning about Kevin’s (Greg Rikaart) groundbreaking cyber program, Victor was keen on taking advantage of it, even if that meant taking capitalizing on Billy’s (Jason Thompson) physical state. After thinking long and hard, Kevin made the choice to take Victor on as an investor. However, Natalie (Mara McCaffrey) — the supposed mastermind behind the Internet security program — showed up and informed Kevin that not only did she already have investors, but that the project wasn’t even complete. Although this angered Kevin, he continued to believe in her, even letting her crash at his home; all to Mariah’s (Camryn Grimes) disapproval. It was later discovered that Adam (Justin Hartley) was kidnapped by Natalie’s investors, as she ended up being offered up for his return. When Natalie tried to escape the premises, Phyllis prevented her from doing so, later revealing herself as the kidnapper. As it turns out, Phyllis is seeking revenge on Victor for taking Billy’s place in the cyber program. She got Natalie to work with her.

On Thursday, Phyllis begins to boast to Billy about the cyber program.

“Let me tell you, it’s going to be spectacular? We deserve this.”

However, Billy — possibly reconsidering his stance now that he has Victoria (Amelia Heinle) and the kids back — doesn’t seem as thrilled as he initially did to take down Victor.

“You have second thoughts, don’t you?”

Victor Has No Sympathy for Billy 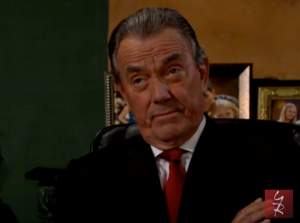 Victor — pictured above in Thursday’s Y&R episode — has a special message he wants Victoria to deliver to Billy. (CBS Screenshot)

Meanwhile, Victor continues to do what he always has; what’s best for the Newmans and business. After agreeing to pay Kevin two million dollars for the cyber project, he later learned that he was being ripped off by one million. In turn, Victor wanted out of the deal. However, Victor now sees that Natalie’s addressing a solution — not knowing she’s really working undercover for Phyllis — so he’s back on board. To top it off, Victor still isn’t a fan of Billy, despite his prior health struggles.

On Thursday, Victoria confronts her father about taking her husband’s spot as an investor. In response, Victor stands firm and refuses to change his stance just because Billy’s hospitalized.

“Convey one message to Billy boy. He’s not part of this deal.”