A 17 year-old-girl from the Gold Coast of Australia has been the subject of countless headlines and a viral video after being pulled onstage at a Madonna concert in Brisbane, Australia, Thursday night. Josephine Georgiou, dressed in a corset with nipple rings attached, appeared quite surprised when Madonna pulled on the nipple ring, exposing her left breast to the audience.

According to her Instagram account, Georgiou is a self-proclaimed “mermaid, metal head, and aspiring astrophysicist.” Though the incident could’ve backfired on Madonna, Georgiou insists that it was innocent and will not press charges or pursue any lawsuits.

“She’s the kind of girl you just want to slap, on the ass and pull,” Madonna said as she pulled Georgiou’s corset down by the attached nipple ring, exposing her breast. The pop star goes onto say, “Oh my God … sorry, sexual harassment, you can do the same to me if you’d like. Good luck.” Georgiou then puts her arm around Madonna and they exchange smiles.

The Guardian.com reports, “The fan said she had been wearing a top belonging to her mother which was too big, and she had been adjusting it as Madonna talked to the crowd. ‘She was calling me a Victoria’s Secret model the whole time I was on stage, which is so flattering’ Josephine said.’ ” 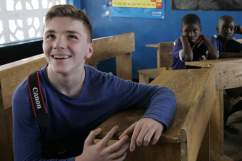 2. She Is Defending Madonna, & Calls It the ‘Best Moment of Her Life’

Thursday’s concert isn’t something Georgiou will ever forget. She has no hard feelings against the Material Girl after the mishap. She grew up listening to Madonna since her mom is also a fan, and never in her wildest dreams thought she’d be pulled on stage. She told the Courier Mail:

I actually couldn’t afford to go but I managed to scrape some money together at the last minute and my friend and I had the worst tickets – the $99 kind at the very top near the side of the stage – and we were running about five minutes late, arriving part-way through her first song, and the man at the gate said to my friend ‘These tickets are s–t but these tickets are really good because these are $500 tickets so have fun’ and just swapped them.

Many suggested that she should sue Madonna over the incident and that it could make her rich. “Seriously, why would I sue Madonna for the best moment of my life?” she said to The Courier Mail. 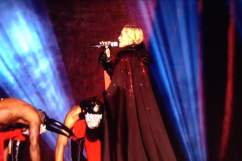 3. Her Mother Isn’t Upset About the Incident, & Doesn’t Think it’s a Big Deal

Georgiou’s mother, Toni Georgiou, is also defending Madonna’s actions. It’s actually her own corset that her daughter borrowed for the show. Mom tells the Daily Mail, “It’s a fun piece of clothing, when you wear it everyone wants to grab the nipple rings, normally it’s fine, when I wear it I never come out of it.”

Toni admits that her daughter looks older than her 17 years. She goes onto tell the Daily Mail:

It is quite serious that she’s a minor – people are saying what if this was a male performer, what if it was some else’s daughter – well it wasn’t another man and it wasn’t another girl it was Madonna and my daughter. 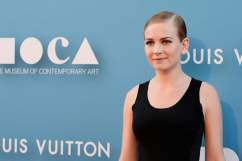 4. She Is an Aspiring Model & Seems to Be Enjoying the Attention

As a young aspiring model, the mass attention Georgiou is getting could become a key factor in helping to advance her modeling career. Her positive attitude regarding the incident is gaining national attention, and could end up landing her a top-notch gig. Georgiou told the Daily Mail, “I’m not signed to an agency, unfortunately, but I would really like to be signed and do paid work.”

On her Facebook page, she writes, “I didn’t even realise Google now auto fills my last name when you type in ‘Josephine’.” Friend Joel Kennedy replied to the post:

You’re gonna get so many Instagram followers
Make sure you’re public!
Easy way to get exposed to agents and great connections for modeling

Georgiou models part time and does styling and photography with a friend. “I’m not signed to an agency unfortunately but I would really like to be signed and do paid work,” she told the Daily Mail.

5. She Is Single but Admits She’s Spending Time With Someone

Georgiou might be single now, but with her combined looks and new-found fame, she is bound to have the attention of men from all over the world. Just after the concert, she was spotted out on the town with a young man. She tells Daily Mail Australia that, “He was just a friend. I don’t have a boyfriend right now but I’m spending time with a lovely French boy.”

Georgiou seems to be a normal teenager who has a hard time expressing herself, loves the beach, and hanging out with friends and family. She also has a sassy, rebellious side that many girls her age possess. On her Instagram account she has posted racy shots and a sultry video playing Nine Inch Nails, “Closer”, in the background. 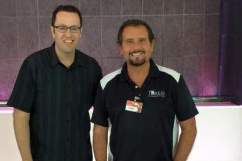