Ashley T, 24, hails from Temple, Texas and is the subject of tonight’s April 8 episode of My 600-lb Life, which airs Wednesday at 8 p.m. ET on TLC. The young reality star has struggled with her weight since she was 3 years old, suffers from borderline personality disorder, and had a bad habit of catfishing people on the internet when she decided to seek out the help of celebrity bariatric surgeon Dr. Younan Nowzaradan in order to regain control of her life.

The TLC description of Season 8 Episode 15, titled “Ashley T’s Story,” reads, “Ashley is 24 and lives alone. Her only sources of comfort are food and the relationships she has online, but not a single one of her profiles is real. Soon, Ashley learns that Dr. Now isn’t someone she can lie to like her online friends.”

Here’s what we know about the reality star and her journey ahead of the new episode. (Warning: Spoilers on Ashley’s story ahead! Turn back now if you don’t want anything ruined for you before the episode airs!)

Ashley is only 24—and not only does she struggle with her weight, she's battling an online addiction with a habit of catfishing. See her story tonight at 8/7c on #My600lbLife. pic.twitter.com/7Jbck3vyw9

Ashley had a traumatic childhood, which is common with many of the subjects of My 600-lb Life. The reality star’s father left when she was very young, she was raped by a neighbor shortly after, and she lived in constant fear that her mother was going to die, so Ashley turned to food for comfort. By the time she was 7, Ashley weighed over 200 pounds, and at 14 she reached 400 pounds and was severely bullied at school.

In the clip above, Ashley explains that she doesn’t even know her own weight when she finally begins her journey with Dr. Now. The reality star notes that her weight is “out of control,” and she feels “trapped inside my own body. I feel trapped inside my house. This is not healthy, and I know I need to change so it doesn’t get worse.”

She then explains that she has an issue with catfishing people online — using fake profiles to lure people into relationships. “I need to change everything from my food to my profiles, and my catfishing to meet people. I recently got caught impersonating someone on the internet and I hope people know that I never meant to hurt anyone, that was never my intention. Had I known that it was going to get out of control like this I would have never done it.” 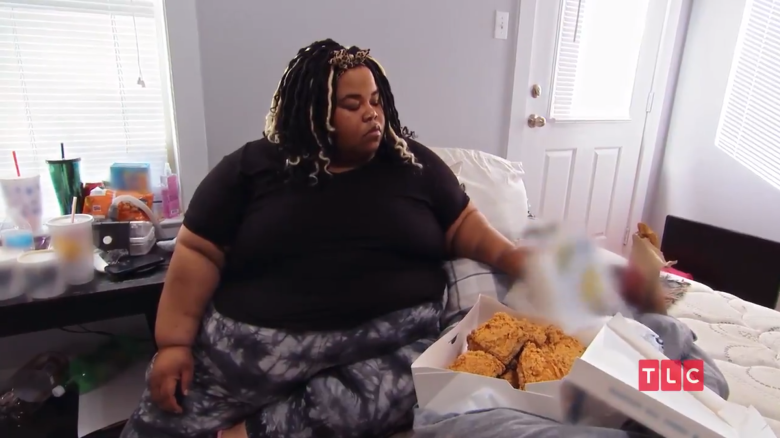 Ashley adds that her family found out about the catfishing incident and they were embarrassed, so many of them no longer speak to her. “I didn’t realize doing something like that would have such an effect on my family, ‘cuz now they’re hurt, and I don’t ever want them to be hurt by anything I do.” She says she wants to stop catfishing people online, but it’s “extremely hard to stop.” However, she admits that she needs help with all of the addictions in her life, which is why she decided to seek out Dr. Now’s help.

“I have a lot of addictions in my life that aren’t healthy, but I know I need to change,” Ashley says in a voiceover. “The most important one is my eating. That’s what’s going to kill me soon if I don’t fix that, so I have to find a way to hit the stop button because if I don’t make that change, I’m not going to live to see my 25th birthday.” 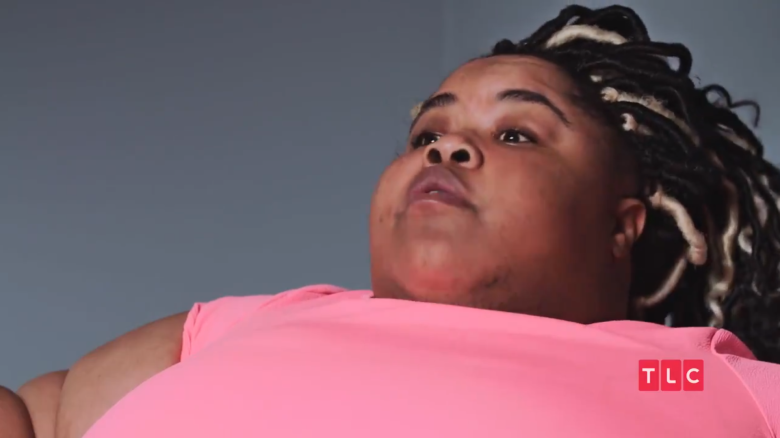 TLC/YouTube Ashley T is the subject of the April 8 episode of “My 600-lb Life.”

When Ashley begins her journey with Dr. Now, he orders her to see a therapist to help deal with her traumatic childhood. Therapist Lola Clay confirms that Ashley has major depressive disorder and tells the reality star, “A little self-introspection will go a long way in helping you develop the emotional depth, the empathy, the remorse, and just the compass that you need to navigate your journey.”

Although Ashley was uncertain of her weight at the beginning of the episode, she was able to drop down to 469 pounds by her final weigh-in with the doctor, according to Distractify. She doesn’t qualify for gastric sleeve surgery in the end, but she appears to be determined to continue losing weight.

“I’m proud of all that I’ve already been able to accomplish so far,” Ashley says at the end of the episode. “I’m not gonna give up and I’m not gonna fail at this, because there’s a future out there that was supposed to be mine to begin with and I gave it up to food and to other things that have kept me from it. So I’m fighting to get back what’s mine.”

My 600-lb Life airs Wednesday nights at 8 p.m. EST on TLC. You can find more coverage of the Season 8 cast and their journeys here.

READ NEXT: ‘My 600-lb Life’ Deaths: Remembering the Cast Members Who Have Passed Away