“This amazing woman was exactly who you wanted her to be…” he wrote on Instagram, sharing a picture of White. “Razor sharp wit, smart, kind, hilarious, sincere, and so full of love.”

In the post, Saget mused about the afterlife. (You can learn about his final Instagram post here, in which he wrote about a Florida comedy show he had just performed).

‘I Don’t Know What Happens When We Die,’ Saget Wrote

From the first time I snuck into ‘The Mary Tyler Moore Show’ at 15 years old and watched her hit everything she said out of the park, to decades later, getting to hang out with her on several occasions, I had a small peek into what a remarkable talent and human being Betty was.

We were on an ABC jet once for a junket and I was sitting across from her, both of us sipping Bloody Mary’s. We had been laughing for hours— I looked into her eyes and faux romantically said, ‘How ‘bout it, Betty, you and me in the bathroom? Mile High Club?’ She answered me before I had a chance to finish the invite— ‘Of course, Bob, you go in there first and I’ll meet you as soon as I finish my drink.’ And then of course she went right to sipping from her straw. I waited in that bathroom for over two hours. (That would be the joke on a joke part, in case you take things literally.)

She always said the love of her life was her husband, Allen Ludden, who she lost in 1981. Well, if things work out by Betty’s design— in the afterlife, they are reunited. I don’t know what happens when we die, but if Betty says you get to be with the love of your life, then I happily defer to Betty on this.

My deepest condolences to her family and friends.

Betty White. My God we will miss you.

His wife, Kelly Rizzo, wrote in the comment thread under the post, “What an absolutely beautiful tribute. And I never knew that story, honey. I’m so happy to know this now. ❤️❤️❤️”

Saget Was Only 65 When He Died 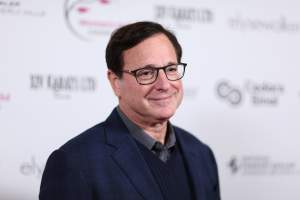 Saget died at age 65 on January 9, 2022, according to the Orange County Sheriff’s Department. “Earlier today, deputies were called to the Ritz-Carlton Orlando, Grande Lakes for a call about an unresponsive man in a hotel room. The man was identified as Robert Saget & pronounced deceased on scene. Detectives found no signs of foul play or drug use in this case. #BobSaget,” the department wrote on Twitter.

You can read more about her marriage to Ludden here.