Bob Saget is dead at the age of 65, according to Sheriff’s officials in Orlando, Florida. The cause of death for the “Full House” star is not clear, but authorities said they found “no signs” of drug use or foul play.

“Earlier today, deputies were called to the Ritz-Carlton Orlando, Grande Lakes for a call about an unresponsive man in a hotel room. The man was identified as Robert Saget & pronounced deceased on scene. Detectives found no signs of foul play or drug use in this case. #BobSaget,” the Orange County Sheriff’s Department tweeted on January 9, 2022.

A department spokesperson told TMZ, which first reported the news of Saget’s death, that “the Medical Examiner’s Office will make the final call on the cause and manner of death.”

Saget’s autopsy has been completed, but there is still no cause of death. “At this time, there is no evidence of drug use or foul play,” Chief Medical Examiner Joshua Stephany said in a statement to CNN. “The cause and manner of death are pending further studies and investigation which may take up to 10-12 weeks to complete.”

Earlier today, deputies were called to the Ritz-Carlton Orlando, Grande Lakes for a call about an unresponsive man in a hotel room. The man was identified as Robert Saget & pronounced deceased on scene. Detectives found no signs of foul play or drug use in this case. #BobSaget pic.twitter.com/aB1UKiOlmi

The beloved actor – known as “America’s Dad” – spoke to News4JAX about his comedy show just days before his death and “appeared in good spirits and health at the time.” You can watch video of that appearance later in this article. You can also listen to scanner audio obtained by Heavy later in this article; dispatch audio indicates that a security guard discovered Saget in his room.

In addition to his role on “Full House,” Saget was probably best known for its Netflix sequel, “Fuller House,” and for hosting “America’s Funniest Home Videos,” a spot he held from 1989 to 1997.

Fans and fellow comedians and actors mourned Saget on social media. “I am broken. I am gutted. I am in complete and utter shock,” wrote actor John Stamos, who co-starred with Saget in “Full House” and “Fuller House.” “I will never ever have another friend like him. I love you so much Bobby.”

I am broken. I am gutted.  I am in complete and utter shock.  I will never ever have another friend like him.  I love you so much Bobby.

Candace Cameron Bure, who played Saget’s eldest daughter on “Full House,” wrote on Twitter: “I don’t know what to say. I have no words. Bob was one of the best humans beings I’ve ever known in my life. I loved him so much.”

I don’t know what to say 💔. I have no words. Bob was one of the best humans beings I’ve ever known in my life. I loved him so much.

“Bob was an amazing comedian and a really warm and generous man,” wrote comedian Margaret Cho. “He was the best.”

“Beloved by millions as America’s Dad, he was a regular presence in our living rooms, bringing to us the funniest videos and countless belly laughs. Gone too soon, like so many of the brightest souls,” George Takei wrote.

1. Scanner Audio Indicates Saget Was Found ‘Not Breathing’ by a Security Officer

The Orange County Fire Department was dispatched at 4:08 p.m. to a medical emergency at 4012 Central Florida Parkway in Orlando, the Ritz Carlton hotel, according to incident records obtained by Heavy.

According to emergency radio transmissions obtained by Heavy, fire and EMS responded to room 962 at the Ritz-Carlton for a male patient. The dispatcher said the 911 caller said it was an “obvious death.” The caller said a “security officer found a guest not breathing, no pulse.” The conversation begins at about 15 minutes and 30 seconds into the audio file below.

“We are devastated to confirm that our beloved Bob passed away today,” his family shared in a statement to the media. “He was everything to us and we want you to know how much he loved his fans, performing live and bringing people from all walks of life together with laughter. Though we ask for privacy at this time, we invite you to join us in remembering the love and laughter that Bob brought to the world.”

A death investigation report obtained by WPTV.com said that Saget’s family contacted hotel security for a welfare check because they couldn’t reach him.

The security member knocked on the door and then gained entry to the darkened and “orderly” room.

Saget was not breathing. He was in bed “cold to the touch, yellow and clammy.”

There were no signs of trauma; Saget entered the room at 2:17 a.m. Sunday.

Loved tonight’s show @PV_ConcertHall in Jacksonville. Appreciative audience. Thanks again to @RealTimWilkins for opening. I had no idea I did a 2 hr set tonight. I’m happily addicted again to this shit. Check https://t.co/nqJyTiiezU for my dates in 2022. pic.twitter.com/pEgFuXxLd3

Saget posted on Twitter just hours before his death. “Loved tonight’s show @PV_ConcertHall in Jacksonville. Appreciative audience. Thanks again to @RealTimWilkins for opening. I had no idea I did a 2 hr set tonight. I’m happily addicted again to this s***. Check http://BobSaget.com for my dates in 2022,” he wrote.

Okay, I loved tonight’s show @pontevedra_concerthall in Jacksonville. Really nice audience. Lots of positivity. Happened last night in Orlando last night at the Hard Rock Live too. Very appreciative and fun audiences. Thanks again to @comediantimwilkins for opening. I had no idea I did a two hour set tonight. I’m back in comedy like I was when I was 26. I guess I’m finding my new voice and loving every moment of it. A’ight, see you in two weeks Jan. 28 & 29 @pbimprov with my brother @therealmikeyoung – And check BobSaget.com for my dates in 2022 – – Goin’ everywhere until I get the special shot. And then probably keep going cause I’m addicted to this s***. Peace out. ✌️

“The Sheriff’s Department and the fire department responded to the hotel around 4 PM ET … after hotel security had found Bob in his room. We’re told he was pronounced dead on the scene, but the circumstances of his death are still unclear,” TMZ reported.

Saget also recorded episodes of his podcast, “Bob Saget’s Here For You,” not long before his death. His last episode streamed on January 3, 2022. You can also watch his podcasts on YouTube.

Despite unconfirmed tweets by various Twitter users, there has been no evidence released that suggests Saget died from the COVID-19 vaccine or booster. As noted, a medical examiner had yet to rule on Saget’s cause of death at the time of publication.

Bob Saget's death was announced an hour ago, and antivax ghouls are already blaming it on the vaccine. Absolutely demented. pic.twitter.com/w2KnPL9Tlx

People are sharing this clip of him talking about receiving a “booster shot,” which he said he received in his “butt” from a pharmacy.

Just another coincidence Bob Saget got his vaccine booster a few weeks ago, and died today? pic.twitter.com/03dRugoTzi

The medical examiner has not yet issued any statement on his cause of death.

The Centers for Disease Control and Prevention says, “Adults and children may have some side effects from a COVID-19 vaccine, including pain, redness or swelling at the injection site, tiredness, headache, muscle pain, chills, fever and nausea. Serious side effects are rare, but may occur.” The site continues, “COVID-19 vaccines are safe and effective. Millions of people in the United States have received COVID-19 vaccines under the most intense safety monitoring in U.S. history.”

“Bob Saget’s death was announced an hour ago, and antivax ghouls are already blaming it on the vaccine. Absolutely demented,” wrote Mike Rothschild, a journalist, author and “subject matter expert in the field of fringe beliefs,” according to a bio on his publisher’s website.

3. Saget Spoke to a Florida Television Anchor a Few Days Before His Death, Saying He Had ‘Great Times in Florida’

According to News4JAX, the week before his death Saget spoke to his longtime friend Bruce Hamilton on the station’s “Morning Show” ahead of his standup comedy performance at Ponte Vedra Hall in Jacksonville, Florida.

The station reported that Saget “appeared in good spirits and health” when speaking with Hamilton, with whom he went to college.

The pair bantered about their time at Temple University in Philadelphia and reminisced about Philly sandwiches.

“I’m leaving tomorrow to be there. … I’m going to Orlando and then I’m coming right to Jacksonville,” he said. “I’ve had great times in Florida, and I’m going back.”

Oh yeah … Philly… Glenside… Back home @keswicktheatre on Friday, March 18!! Tickets avail at: https://t.co/iSTtV8L8hd —but click the yellow bar at the bottom on the ticket site. It’s not labeled. Nobody’s fault. Glitch in the Matrix. pic.twitter.com/508kQyPsFc

Hamilton said of Saget’s return to standup comedy: “It’s really a result of COVID because you are over all of the anger and negativity these days.”

Saget said, “I really love doing standup right now more than I ever had.” He said he didn’t talk about politics or religion; he just wanted to make people laugh.

“I just want to make people have a good time,” Saget said, adding that he was getting ready to do a new special.

Saget also recorded an interview on January 3, 2022, with actor and comedian B.J. Novak, who wrote, “I have always and will always love Bob Saget.”

I have always and will always love Bob Saget. https://t.co/dAlMU913Wc

Novak posted an emoji of a broken heart after the news of Saget’s death broke.

4. Saget Was Born in Philadelphia

According to his IMDb profile, Saget was born on May 17, 1956, in Philadelphia, Pennsylvania.

His parents were named Rosalyn and Benjamin Saget. Benjamin Saget was a supermarket chain executive and died of complications from congestive heart failure in 2007 at the age of 89, according to his obituary in the Jewish Journal. Rosalyn “Dolly” Saget raised her son and worked as an executive assistant at Children’s Hospital of Philadelphia; she died in 2014 also at age 89, according to her obituary from the Los Angeles Times.

Throwback to Bob Saget singing the National Anthem prior to a game in 2012. 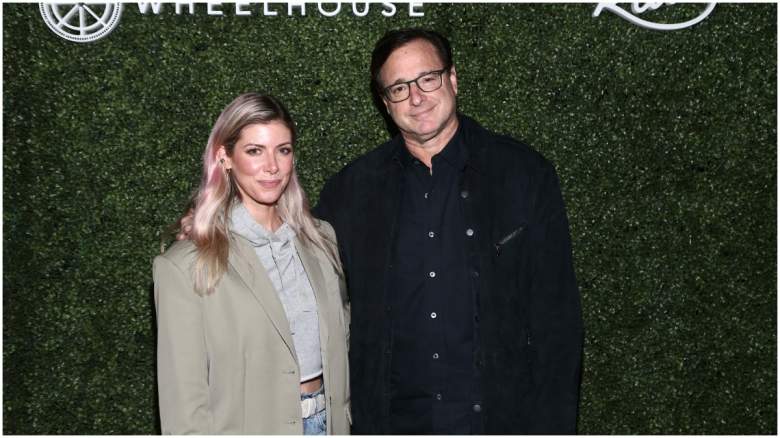 Saget was married twice; first to Sherri Kramer Saget from 1982 to 1997, according to IMDb, and later to Kelly Rizzo. Saget and Rizzo married in 2018 after meeting in 2015.

Saget asked Rizzo to marry him in 2017, he announced on Instagram on November 8 that year. Closer Weekly reported in 2018 that Saget “announced that he popped the question to his much-younger girlfriend, Kelly Rizzo, via Instagram.”

“Love the people in this picture. The most loving and legendary @George_Shapiro, Katie Killean & of course my gal Kelly. In case you’re wondering, we were celebrating our engagement— and I know George and I will be very happy together!” Saget, then 61, wrote.

He is holding Rizzo’s hand in that photo.

In 2016, Saget told People magazine that his daughters were “the best people I know.”

“They are the light of my life. I am a fortunate man in that all three of my daughters are exceptional. Very high beings, very smart people, very wonderful and very brilliant, very beautiful. They’re all artists,” he told People.

“heavy.com” is censoring comments that suggest the cause of death

My prayers go out to his friends and family. A great man gone to soon. So sad.

So sad, and we hear similar stories all over again and again …… and he got his booster shot ?……