After Chadwick Boseman’s death on August 28, 2020, reports began to swirl regarding his widow, Taylor Simone Ledward, being pregnant.

MediaTakeOut reported that an anonymous source said that Ledward had gotten pregnant before Boseman’s death. The site claimed that the source told them, “Chad wanted kids, and so did [Taylor]. Since they knew he was leaving us, I wouldn’t be surprised if he got her pregnant, so she can carry his seed.”

They reported that they showed a recent picture of Ledward to Boseman’s close friend and he replied, “Yeah, she looks pregnant to me. She [was] much skinnier before.”

These claims were speculation and never confirmed by Ledward. If she was pregnant, she would’ve given birth by now. 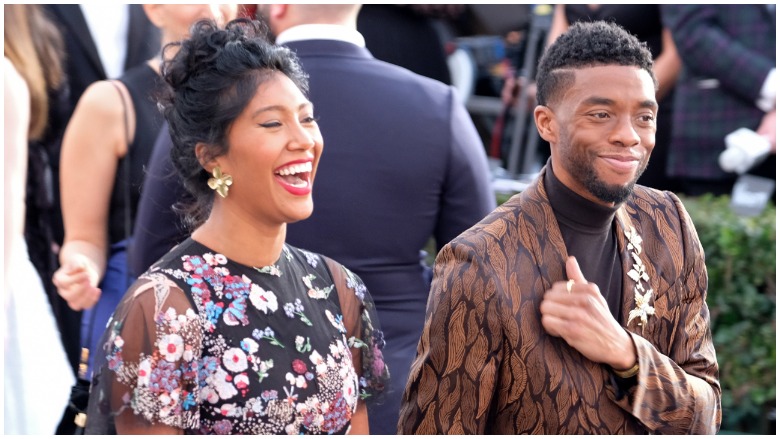 The false reports that Ledward was pregnant upset readers and led to them criticizing sites who were reporting it on social media. Fans accused the sites of being irresponsible and insensitive for posting such a story.

“This article claims that Chadwick Boseman’s wife is pregnant base solely off her gaining weight,” one person tweeted. “It’s sick that media outlets are making false accusations on a mourning woman just for some clicks.”

“This is very irresponsible reporting,” they wrote. “It’s because she’s put on weight? SMH. At least confirm she’s pregnant. I know y’all wanted to get in early, but if she’s not pregnant and she’s depressed, eating more, etc. then this is a real crappy move.”

Another Twitter user accused them of capitalizing off of Ledward’s grief.

“How dare you write this kind of stuff??,” another tweet read. Getting clout from someone’s tragedy? The woman is probably depressed, how can you spread stupid rumors (which by the way are NONE of your business) just because she gained weight?”

Chadwick Boseman died in August 2020 after an four-year battle with colon cancer. His publicist told the New York Times that the Black Panther star learned he had stage three colon cancer in 2016 and it had progressed to stage four. In a statement announcing his death, it was revealed that Boseman was undergoing treatment while filming many of his last movies.

“A true fighter, Chadwick persevered through it all, and brought you many of the films you have come to love so much,” the statement said. “From Marshall’ to Da 5 Bloods, Ma Rainey’s Black Bottom and several more, all were filmed during and between countless surgeries and chemotherapy.”

When Ledward accepted Boseman’s NAACP Image Award for outstanding supporting actor in Spike Lee’s Da 5 Bloods, she urged everyone watching to get screened for colon cancer.

“If you are 45 years of age or older, please get screened. Don’t put it off any longer, please get screened,” she said.  “This disease is beatable if you catch it in its early stages, so you don’t have any time to waste, even if you have no family history and even if you think that nothing is wrong. If you are younger than 45, please be proactive about your health. Know the signs and know your body — listen to your body.”

Boseman is up for another posthumous win at The 93rd Academy Awards. He is nominated for best actor for his role in Ma Rainey’s Black Bottom. Tune in on April 25, 2021 at 8:00 EST on ABC.