Erika Jayne spilled new information about her divorce on the most recent episode of the “Real Housewives of Beverly Hills.”

While on a hike with co-stars Garcelle Beauvais and Crystal Kung Minkoff, the “Pretty Mess” singer revealed that she knew nothing about her estranged ex-husband Tom Girardi’s impending lawsuits when she filed for divorce from him last November.

She then dropped some surprising information as Beauvais asked her about reports of Girardi’s legal problems and dementia diagnosis.

“It’s hard to watch someone go through this and there’s nothing I can do to help,” Erika said. “I just wish that all of this pain that he’s in would stop for him. …I have not talked to him and I cannot talk to him. He calls me every day. That’s another hard part of it. I had to ask my attorney to call his attorney to say, ‘Please stop calling Erika.’”

The Bravo star added that regularly hearing from her ex was difficult for her.

During a later conversation with the rest of the cast during their getaway to Kyle Richards’ house in La Quinta, California, Beauvais brought up Erika’s comment that Girardi was still calling her.

Erika immediately blasted her and insinuated that she was looking to have a “Real Housewives” “moment.”

“I do mind you saying that because I feel like you’re betraying my friendship right now,” Erika said to Beauvais. “But please, have your moment. Go ahead. Go ahead.”

Erika went on to recount the story, but she did not hide her anger at Beauvais for spilling part of their private conversation.

“So let me tell the f***ing story,” Erika told the group. “Tom calls me all the time. I won’t take his calls.”

She then addressed Beauvais directly with: “And you got it out of me once and now you want to do it again. … Don’t f***ing sugar coat it. … Sometimes not everything is up for discussion, I’ve been very open and very honest, so I think that was dirty.”

Erika then broke down in tears as she called Beauvais out for getting her to talk “twice.”

After Erika stormed off, Crystal Kung Minkoff noted that Beauvais hadn’t heard Erika when she said she didn’t want to talk about Girardi’s phone calls any further. 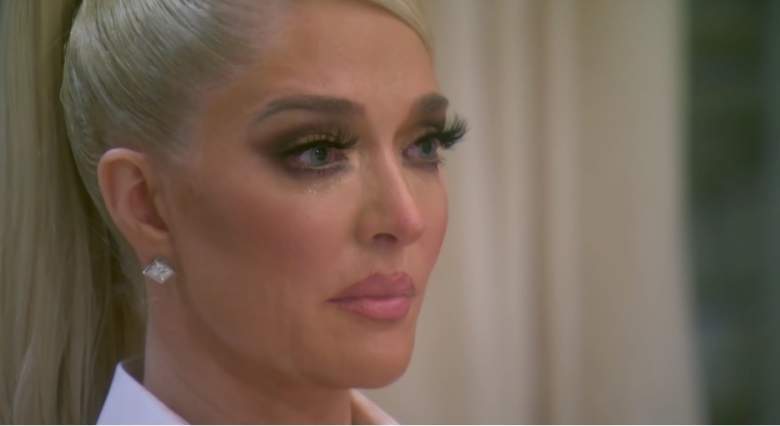 On social media, fans sided with Beauvais for doing her “job” on the Bravo reality show. Some speculated that producers told her to bring the conversation up on camera.

“Garcelle literally just showed up and started to ask what we all want to know. Give her a raise #RHOBH,” one fan wrote.

Others wondered why Erika Jayne was mad, considering the original conversation had already been filmed.

“I feel like Erika’s breakdown wasn’t actually about Garcelle bringing up that Tom calls her every day, but she was having a panic attack because she suddenly realized that she had said too much in front of the cameras…#RHOBH,” one fan wrote on Twitter.

“Erika popping off on Garcelle for bringing up that Erika still talks to Tom but remembering she told Kyle she hasn’t talked to him since she left,” another noted.

“Erika realized that she made a huge mistake saying he calls her because it doesn’t align with her original story of how awful he is & how he’s coming after her so he took it out on Garcelle. It’s not G’s fault she can’t keep her story straight! #RHOBH,”  a third fan chimed in.

As for Beauvais, she has gone on record as saying that she has been surprised about how much Erika Jayne opened up about her divorce while filming “The Real Housewives of Beverly Hills.”

“What surprised me most this season was two things: that Erika was so open to talk,” Beauvais told Today. “And the other thing is how quickly the other girls rallied around her and didn’t even question … like they questioned Denise (Richards).”

Loading more stories
wpDiscuz
0
0
Would love your thoughts, please comment.x
()
x
| Reply
The 'Real Housewives of Beverly Hills' star opened up about her divorce on camera.