Brandon Thomas Lee posed on the red carpet with his famous father.

“The Hills: New Beginnings” star attended the 2021 MTV Video Music Awards with his dad, Motley Crue drummer Tommy Lee.  The father and son duo posed on the red carpet at the Barclays Center in Brooklyn, New York, and they both shared photos from the event on their Instagram pages.

“Da boys,” Brandon captioned a pic of him and his dad. In the pic, “The Hills” star wore a pink bucket hat, pink pants, and sunglasses while his rock star dad dressed in all black with mismatched sneakers. 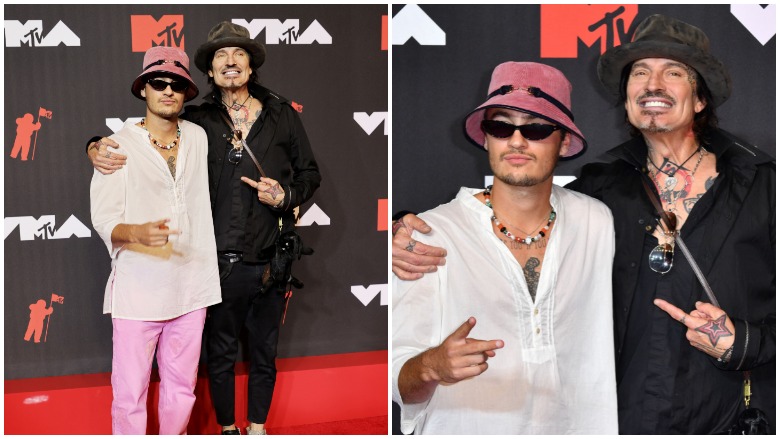 GettyBrandon Thomas Lee and Tommy Lee at the 2021 VMAs.

On his Instagram story, Brandon also shared footage from backstage as his dad got ready to present an award. Brandon also posted footage of his dad with pal Machine Gun Kelly backstage.

Tommy Lee Has a Long History With the VMAs 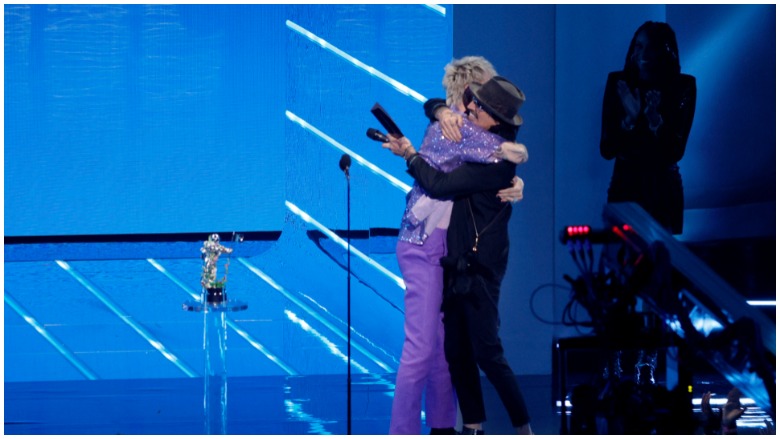 GettyMachine Gun Kelly accepts the Best Alternative award for “My Ex’s Best Friend” from Tommy Lee onstage during the 2021 MTV Video Music Awards at Barclays Center on September 12, 2021 in the Brooklyn borough of New York City

Tommy Lee is no stranger to the Video Music Awards stage. In 1990, his band Motley Crue performed live at the VMAs at Universal Amphitheater in Los Angeles, California, where they played their song “Don’t Go Away Mad (Just Go Away)”. That same year, they were also nominated for a Best Metal/Hard Rock Video for their song “Kickstart My Heart” against Faith No More’s “Epic,” Slaughter’s “Up All Night” and the ultimate winner, Aerosmith’s ”Janie’s Got a  Gun,” per Loudwire.

Kelly played Tommy lee in the Motley Crue biopic “The Dirt,” so it’s no surprise that the rock legend referred to the VMA winner as his “bro” when he announced him as the winner.

Tommy Lee’s Relationship With His Son Was Addressed on the First Season of ‘The Hills: New Beginnings’

Fans were happy to see the Lees reunited on the VMAs red carpet. The father and son had some well-documented family problems that played out as the first season of the MTV revival series was filmed in 2018. At the time, TMZ reported that the family feud started over an interview that Brandon’s mom, former “Baywatch” star Pamela Anderson, did with Piers Morgan that addressed her ex-husband’s volatile past. Brandon did not talk to his dad for months after they had a blowout argument over Anderson’s interview.

Brandon told Entertainment Tonight, that while he wanted to keep his family matters private, the feud story spilled over into “The Hills” filming.

“It’s something that was really prevalent in my life at the time, during most of the filming process,” he said. “It [was] definitely a hard time for both of us.”

The Lees made amends off-camera, but Brandon addressed his beef with his dad while on the show.

“I feel like I was pretty angry when I was filming,” he admitted to ET. “I was really upset when all that stuff was going on. But friends fight. He’s like my best friend, so people get over it.”

While Anderson did make a cameo on the first season of “The Hills,” Tommy Lee didn’t turn up on camera. Brandon later told Us Weekly that his dad was supportive of him joining the MTV reality show even if it meant airing their family’s personal business.

“My dad’s just very protective,” Brandon said. “We’re good. He looks out for me, so he’s just excited to see the show, see how it turns out.”