Capcom’s debut Nintendo Switch was actually a port of Street Fighter II. With a hefty price tag of $40, many players questioned whether the title was worth getting.

As it turns out, there was a good chunk of players out there who determined it was worth the price and went out there and bought it. As a result of this, Capcom determined that it would bring more Switch versions of games to the console. Shortly after that was announced, Capcom announced that both Resident Evil Revelations titles would be receiving Switch versions later this year.

Capcom reported that around 450,000 copies of Street Fighter II sold on the Switch, which means the company considered the title a success even though it didn’t even crack half a million copies sold. This leaves us wondering what Capcom looks for when determining whether a title is a success or a flop.

This is important because Capcom recently said during a Q&A that the sales of Monster Hunter Double Cross, styled Monster Hunter XX, would impact how the company supports the Switch in the future.

Here’s the question and answer from the Q&A.

Q: Following the sales results of Ultra Street Fighter II, what will Capcom’s approach to the Nintendo Switch be going forward?

A: The Nintendo Switch seems to be doing very well, and we look forward to further growth in its install base. Beginning with Monster Hunter XX (Double Cross) Nintendo Switch Ver. for Japan, we are evaluating how we will support this platform in the future.

It seems like Capcom is treating games on the Nintendo Switch on a case to case basis. It seems like since Street Fighter succeed we received the Resident Evil titles. Now it looks like if Monster Hunter succeeds, we’ll see more Capcom titles in the future.

According to VG Chartz, Monster Hunter Double Cross for the Nintendo 3DS sold about 1.56 million copies as a Japan exclusive so there’s reason to believe the number could also be high on the Switch. Sales will again have to rely on the Japanese market as the Switch version currently has no plans to be localized for western audiences.

If you’re interested, a demo for the game is coming to the Japanese eShop on August 10. It likely won’t have English subtitles but you will still be able to play it if you create a Japanese Nintendo account on your Switch. The actual release of the title will be coming August 25. 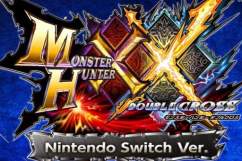